Recently a 0.32 ct, G-color CVD synthetic (figure 1) was submitted to the Carlsbad laboratory. DiamondView imaging (figure 2) showed a few interesting characteristics. Most of the sample displayed a deep blue fluorescence, a feature typically derived from the N3 optical center and often observed in natural diamonds. CVD-grown synthetic diamonds usually have either a greenish blue or an orange to red fluorescence, depending on whether they have been treated to generate high concentrations of NV centers. The deep blue, N3-related fluorescence is so prevalent among mined diamonds that the color itself can often verify that a diamond is not synthetic. In addition to the deep blue color of the fluorescence, its visual pattern closely resembled the dislocation networks commonly seen in natural-origin type IIa diamonds rather than the striations caused by stepwise growth in CVD synthetics (P.M. Martineau et al., “Identification of synthetic diamond grown using chemical vapor deposition [CVD],” Spring 2004 G&G, pp. 2–25). 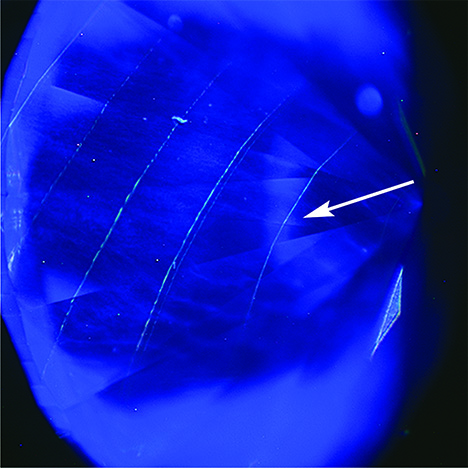 Taken together, the blue fluorescence and apparently random patterning closely resemble DiamondView images of natural-origin type IIa diamonds. This indicates that CVD manufacturers are becoming quite adept at mimicking natural growth. It is unclear whether this resemblance was a deliberate goal or a by-product of advances in CVD growth; regardless, the blue fluorescence for this CVD synthetic diamond does not appear to derive from the N3 center. Photoluminescence (PL) spectros­copy, collected with 325 nm excitation, showed only a very weak peak at 415.2 nm.

Yet this stone also contained two features that clearly indicated its synthetic origin: a large concentration of the Si-V center at 737 nm, revealed by PL spectroscopy, and the pronounced yellow-green parallel lines in the DiamondView image.

These parallel lines, with a nearly uniform spacing of approximately 0.8 mm in this sample, are created when the CVD reactor undergoes stop and start cycles during growth. These cycles create a temporary change in chemical composition, especially at the growth interface. Willems et al. (“Exploring the origin and nature of luminescent regions in CVD synthetic diamond,” Fall 2011 G&G, pp. 202–207) proposed that a change in surface roughness promotes the incorporation of impurities, which alters the fluorescence and creates new dislocations.

Four PL spectra were collected from these yellow-green lines and from the blue-fluorescing regions, using 488 nm laser excitation and normalized to the Raman peaks. The relative intensities of the peak areas from both regions were averaged to compare the optical defects that altered the fluorescence. The H3 center at 503.2 nm, the NV centers at 575 and 637 nm, and the Si-V center at 737 nm all showed higher concentrations along the yellow-green lines. These vacancy-related defects increased by a factor of approximately 1.5 for NV0 and Si-V, 3 for NV–, and 5 for H3, indicating a higher presence of vacancies at the growth interface. Several sequential growth runs were likely necessary to achieve high CVD quality, leaving behind these fluorescence lines as evidence of synthetic origin.

Sally Eaton-Magaña is a research scientist at GIA's laboratory in Carlsbad, California.