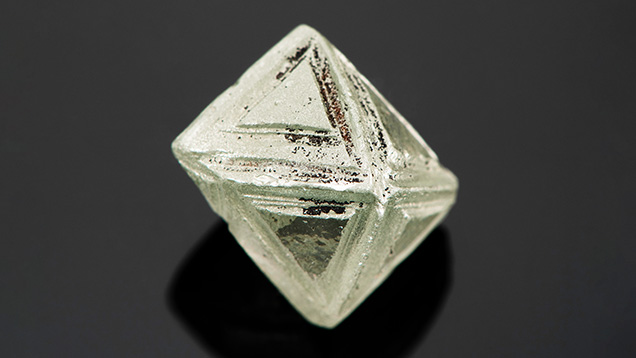 A 7.42 ct light bluish green specimen (figure 1) submitted to the New York lab for a colored diamond identification and origin report was identified as a synthetic moissanite crystal carved to resemble a natural diamond rough. Since synthetic moissanite resembles diamond at a glance and has a similar specific gravity and “heft,” it could easily be mistaken for natural diamond. The sample was first identified as synthetic moissanite using Fourier-transform infrared (FTIR) spectroscopy (figure 2). The resulting data displayed a distinctive moissanite spectrum, with peaks occurring at 2079, 2297, and 2392 cm–1 (A.M. Hofmeister et al., “Optical constants of silicon carbide for astrophysical applications,” Astrophysical Journal, Vol. 696, No. 2, 2009, pp. 1502–1516). This finding was confirmed with an analysis of the Raman spectrum, which showed strong 767, 788, and 798 cm–1 peaks, also consistent with synthetic moissanite (figure 3). Although natural moissanite does exist, crystals are tiny and fragmented. Gem-quality specimens have not yet been found (Summer 2014 Gem News International, pp. 160–161).

Figure 3. Raman spectroscopy confirmed the identification as synthetic moissanite, with peaks at 767, 788, and 798 cm–1. (The sharp peak at 970 cm–1 suggests a hexagonal 6H type of silicon carbide.)

The turbid and stained 7.42 ct synthetic moissanite was shaped into a slightly rounded octahedron with prominent stepped edges. Octahedra belong to the cubic crystal class; both natural and synthetic SiC belong to the trigonal class and always display hexagonal prismatic to tabular forms. It was concluded that the synthetic moissanite rough had been carved into an octahedron, and that the detailing of the stepped edges and coarse textures were specifically chosen to imitate the appearance of a natural diamond octahedron that had been partially resorbed by kimberlitic magma, such as the natural diamond in figure 4. Although sharp and well-formed diamond octahedra are occasionally found preserved in mantle rocks entrained in kimberlitic eruptions, the vast majority of natural diamond crystals are exposed to corrosive kimberlitic fluids during their ascent through the cratonic mantle and display a wide variety of resorption textures (R. Tappert and M.C. Tappert, Diamonds in Nature: A Guide to Rough Diamonds, 2011, Springer Verlag, Heidelberg, Germany). 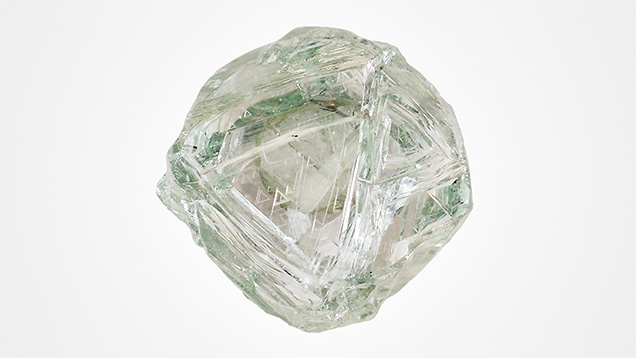 Figure 4. Exposure to kimberlitic fluids rich in O2 and H2O creates varied shapes and textures in natural diamond octahedra. This natural green diamond, known as the “Matryoshka” (Spring 2020 Lab Notes, pp. 127–129) has resorbed points and edges as well as trigonal etching on the {111} faces. Photo by Jian Xin (Jae) Liao.

This investigation is a reminder to take caution when identifying gemstones, as intentional material processing steps such as these may be used to deceive consumers and could damage the integrity of the gem trade.

Courtney Robb and Sarah Arden are analytics technicians at GIA in New York.

A light green specimen, submitted as a rough diamond, is actually a synthetic moissanite.

Natural moissanite crystals found in Israel have broken world records, with evidence of larger crystals in the area.