The faces of the octahedron showed a stepped appearance, and the edges had parallel grooves and combinational surfaces. The faces and edges were smooth except for one face where mechanical damage was noticeable. Initially, the specimen was examined using conventional gemological instruments. It was inert to long-wave UV (365 nm) and anisotropic. Thermal conductivity testing indicated diamond. Tests for electrical conductivity were not convincing, however: Some areas (mostly on the edges) corresponded to diamond, but others (on smooth faces and dimples) indicated synthetic moissanite. There were no inclusions associated with natural diamond. Only small parallel needle-like inclusions, typical for synthetic moissanite, were found using a gemological microscope (figure 2). 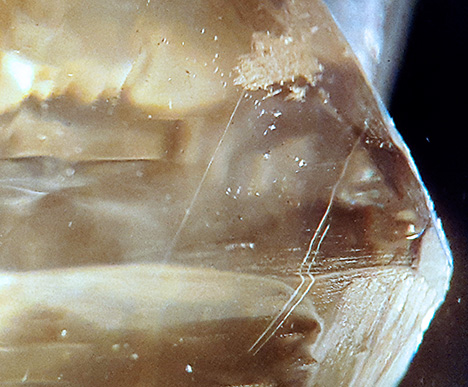 X-ray tomography showed that the inner part of the sample was distinguished by its X-ray density from the outer shell, which had a variable thickness from 19 to 115 microns (figure 3). Microprobe analysis with a JEOL JXA-8100 four-channel microanalyzer revealed the presence of up to 61 wt.% silicon on some polished faces of the crystal, along with titanium in the composition of the surface layer (figure 4 and table 1). Some polished faces showed a diamond chemical signature.

Figure 4. A fragment of the synthetic moissanite crystal, viewed with the electron probe microanalyzer. The crystal was analyzed on the surface. Spectrum numbers correspond to the analysis numbers in table 1.

Based on these results, we identified the sample as synthetic moissanite that had been covered with a thin diamond film. Based on the study by T. Teraji et al. (“Chemical vapor deposition of 12C isotopically enriched polycrystalline diamond,” Japanese Journal of Applied Physics, No. 51, 090104, 2012, pp. 1–7), the diamond coating was likely applied using polycrystalline diamonds. The top layer was made of a composite material consisting of metal matrix and nano-diamond particles.

A diamond imitation such as synthetic moissanite coated with a thin diamond film is challenging to identify, since its luster and thermal properties correspond to diamond. Even with a very thin coating that did not exceed 0.001 mm, the sample tested positive for diamond. This application of thin diamond films onto non-diamond material could be an issue for gemologists in the future.

Vera A. Pakhomova, Dmitrii G. Fedoseev, Svetlana Y. Kultenko, Alexander A. Karabtsov, Vitaliia B. Tishkina, and Valentina A. Solyanik are with the Far East Geological Institute (FEGI FEB RAS) in Vladivostok, Russia. Vladimir A. Kamynin is with Gokhran of Russia in Moscow.