Most newly appointed executives – especially those who have just taken the reins of their family’s fourth-generation company – expect leadership challenges on every front, from marketing and sales to operations and logistics.

For Dr Ken Fujita, GIA GG, the early days of his tenure as president and CEO of his family’s Tokyo-based jewellery wholesaling company, Fujita Co., Ltd., were marked by a different sort of leadership trial: the aftermath of the largest earthquake in Japan’s history.

Fujita was leading a late-afternoon corporate meeting with a partner department store in Tokyo on 11 March 2011 when the shaking started.

“I’ve been through thousands of earthquakes in my life, but the size of this shake was unusual,” Fujita says.

He stopped the meeting and led attendees out to the department store retail area, where mannequins were falling, and customers and retail associates were dropping to the ground and crying. Fujita helped people evacuate to the exit floor; he could not return to his home for the next 24 hours.

Transportation was down across the city after the magnitude 9.1 Tōhoku quake, and the tsunami and nuclear disaster that followed only increased the challenges that Japan would face. But Fujita, who was appointed to his position just after the quake, was determined to lead – and guide his employees through the difficult days, weeks and months ahead.

“We worked harder and harder,” he says. “We had to work beyond the crisis, and think beyond the disaster.” Fujita Co., Ltd., which wholesales to department stores – providing coloured stones, jewellery and even sales associates – weathered the crisis, maintaining a healthy business through tumultuous times.

Fujita’s sense of responsibility and leadership probably comes from the fact that Fujita Co., Ltd. was entrusted to him by his father, Sadaharu Fujita, whose own grandfather founded the family business in 1920 as a silver ornament and tableware company.

After the Second World War, Sadaharu Fujita’s father, Teiichi, expanded the company to include jewellery wholesale, and when he took over, he began to import coloured stones.

Sadaharu Fujita – who also served as president of the International Colored Stone Association from 1991-1995, instituting the NET system of treatment and enhancement identification – planned to pass the business to his son, Ken, with one qualification: he had to attend GIA to earn his Graduate Gemologist diploma and polish his English skills. 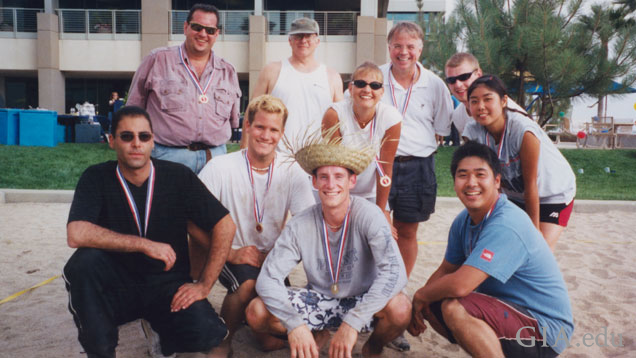 Dr Ken Fujita, bottom right, still has the winners' medal he and his classmates won at a campus-wide volleyball tournament at GIA’s Carlsbad campus in 2002. Fujita, who serves as president of the GIA Alumni Association Japan, says that the friendships he made during his time as a student are one of the highlights of his GIA experience.

Ken Fujita, who already had a Ph.D. in organic chemistry from Tokyo University of Science, moved to Carlsbad and earned his GG in 2002, which he followed up with jewellery design and business classes. He found that learning about such a large variety of gemstones in just six months was both helpful and efficient.

“It was a great opportunity to train my identification skills,” Fujita says. “There are thousands of stones to identify and practice with. In the real world of business, you can’t make mistakes – but the courses offer you the opportunity to make those mistakes and learn from them.”

But for Fujita, the best parts of his GIA experience were the friendships and connections that began there, and continue today.

“Those relationships are so important and meaningful,” he says.

Fujita was appointed as president of the GIA Alumni Association’s Japan chapters in 2010 after his mentor, Yoshiko Doi, suggested it. He is committed to helping foster relationships and networking opportunities between other GIA graduates across Japan. 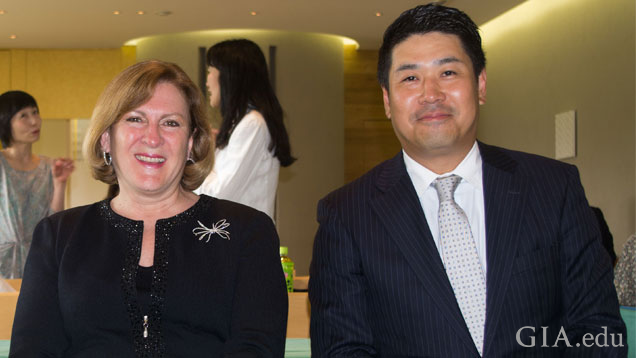 “After GIA graduation, we can help them make those connections,” he says. “I want to make our chapters in Japan a very comfortable place for alumni. The GIA Alumni Association is a place where graduates can connect with a new supplier or client, make a new friend, or educate themselves with new and ongoing developments in the trade.”

Fujita says those interested in entering the gem and jewellery industry should pursue a GIA education, regardless of whether they have an established family history.  “The designation of GG is a very important ‘passport’ in our industry to identifying a respected, trustworthy professional,” he says.

He also offered some advice on how to stay ahead to those already in the business: “Deal with only beautiful pieces … and I don’t mean only expensive items,” he says. “I think beauty is the key to surviving in the industry.”