Soweto Jeweler is a Symbol of Hope for South Africa

Robert Weldon, manager of photography and visual communications for GIA, met Nqobile Nkosi on a trip to South Africa in 2012. Nkosi is a self-made jeweler from Soweto, South Africa, who is hoping to create jobs and opportunities in his township.

Soweto’s first home-grown jeweler has set his goals high and his aspirations even higher.
Nqobile Nkosi, who is a jewelry designer, manufacturer and retailer, embodies the spirit of entrepreneurship that is characteristic of the new South Africa.
His story focuses as much on jewelry education and innovation as it does on the dismantling of social barriers. It is the story of a man who simply does not recognize impediments, be they financial or social. Instead, his vision is clear: to build a business, create new jewelry, disseminate his ideas globally through cooperation and friendships, and most importantly, to create jobs locally.
Soweto, southwest of Johannesburg, was formed at the intersection of repression, activism – and now – hope. Home to an agglomeration of townships that coalesced in 1961 as a sprawling suburb of South Africa’s capital, its population of more than one million includes many African miners who toil daily in the nearby gold and diamond mines.
Soweto, site of the now-famous uprising that eventually helped bring an end to the apartheid system, was also home to Nelson Mandela and other leaders of the anti-apartheid movement. Though enormously underdeveloped still, entrepreneurship and business creation is on the rise, and Soweto is slowly emerging as the country’s breathing symbol of hope and freedom.
“Everyone can rise above their circumstances and achieve success if they are dedicated to and passionate about what they do,” Mandela has said.
Nkosi has translated those words into action.
Cakes, Biscuits, and a Window
Nqobile Nkosi, like hundreds of thousands of South Africans in 2004, found himself at a crossroads.
“I was unemployed, at home, and it came to a point where I really had to do something with my life,” he said. A friend suggested taking courses at the Soweto Jewellery Training School, which Nkosi immediately pursued.
“Some months before the training ended, I started selling cakes and biscuits at school to make ends meet and to be able purchase my first polishing motor and ultrasonic cleaner. I made small space in my bedroom for a torch and a small bench,” he said. “I was a one-man-band jeweler.”
As improbable as it might seem for a jeweler to set up shop in the township, Nkosi said there was no shortage of business, even before his studies were concluded.
The requests came steadily: “Could you please size this ring for me?” “Could you polish this, or do that?”
Nkosi seized the opportunities as they arose. Talking with people, being introduced to the trade, and being able to contribute to his community was a turning point for Nkosi. “It is really all about what you want to achieve. For me, the jewelry business was different. It opened a new window in my life and I just wanted to go further with the experience.” 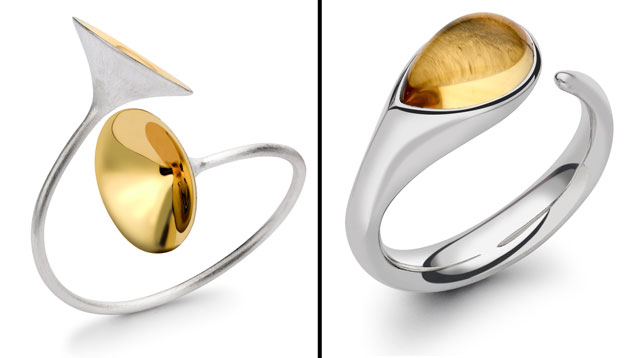 This Cornerstone design, left, called a “vuvuzela,” or a fanfare, is used in stadiums to make noise while rooting for a favorite soccer team. South Africa hosted the 2010 FIFA World Cup in soccer. The Silver Flame ring, right, is set with citrine. Photos courtesy of Cornerstone.
Success followed, and he began to earn local awards and recognition: a South African Breweries Kickstart Award (a cash prize given to young entrepreneurs), a Jet Community Award and a nomination as a Gauteng local business leader. Other forms of recognition followed as well.
He invested all of his cash prizes in the business, making it possible for it to grow and for him to be able to hire additional people.
“For me, success isn’t driving a new car,” Nkosi said. “I see success as being able to move this business from one generation to the next.” 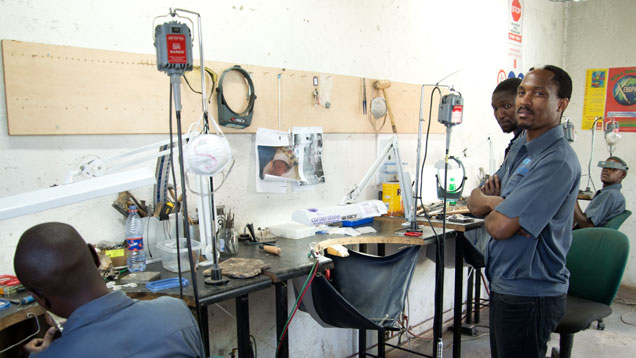 Nkosi’s studio is small and bursting at the seams. As he reaches towards an international audience for his jewelry, Nkosi’s space considerations, tools, security and further training for his workers become his principal focus. Photo by Robert Weldon, © GIA 2012.
Growth and Future
Nkosi established a new company, NQ Jewellery, in 2007, and its success soon required additional support. “My brother came to help out, and soon I was training yet another colleague,” he said. “Now we have six people working for the studio.”
The main challenge he now faces is logistical: he needs a new space in which to grow and needs training for his workers.
Nkosi has also begun to establish connections internationally. Award-winning U.K. jeweler Paul Spurgeon met Nkosi on a business trip to South Africa and the two became immediate friends and business partners. Together they formed a separate international company called Cornerstone, and soon thereafter Nkosi traveled to Birmingham, U.K. to train at Spurgeon’s manufacturing facilities. The plans are for additional workers at Nkosi’s studio to do the same in coming years. 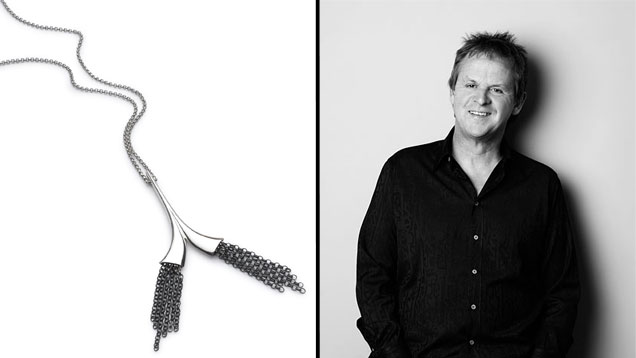 This design features a Pagoda pendant with oxidized chain detail. Paul Spurgeon, an award-winning designer based in the UK, is business partner with Nkosi in a separate company called Cornerstone. Photo courtesy of Cornerstone.
Spurgeon wrote about his partnership with Nkosi in the UK-based trade magazine Professional Jeweller: “My personal commitment to Cornerstone is based on my desire to help provide skills and jobs to a people that have so often been marginalized and forgotten, in a continent that has given us in the trade all the materials needed.”
The Cornerstone collaborative project and jewelry brand launched their first products at the Springfare trade show in Birmingham, and a new international line of products was shown to GIA when we visited Nkosi in Soweto in late 2012.
Spurgeon’s and Nkosi’s Cornerstone initiative has gathered steam in the U.K. community as well: In February, 2012, Spurgeon organized a sponsored bike ride from Goldsmiths’ Centre in London, to Paris. Weston Beamor, a precious metals casting house in Birmingham, offered free casting services to the group so the first international collection could be launched. 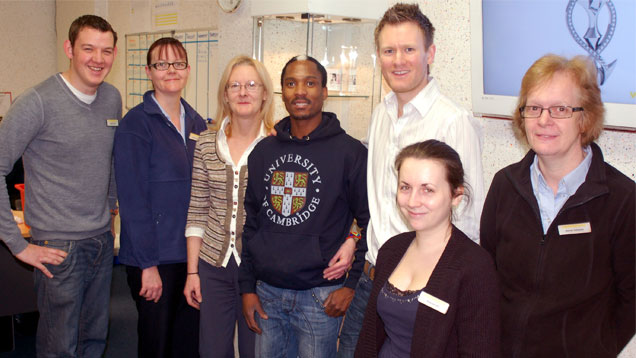 Nkosi poses with the team at Weston Beamor, a precious metal casting house located in Birmingham, UK. Photo courtesy of Cornerstone.
Nkosi is ready to launch his full collection of South African-inspired motifs in 2013. “Our products aim to have a unique African look, but with a European appeal,” he said. “This is the launch of a brand.”
Nkosi met with GIA’s late Vice President of International Operations, Tawfic Farah, as well as a few members of GIA’s Board of Governors, in 2013. GIA provided Nkosi with an AJP education scholarship, which he completed soon after and has taken on the role of president for GIA’s Alumni Africa chapter.
Nqobile Nkosi, the first designer and jeweler from Soweto is clearly not looking back. He is joining the international community of jewelers, with an eye towards furthering his and his team’s education – and creating much-needed jobs at home.