“Go out and make yourself a little uncomfortable” was perhaps the outstanding theme of this year’s “Creative Careers Panel” during the 2019 GIA Carlsbad Jewelry Career Fair.

And by going out, panelist Wade Clar, Jr., director of brand development for Julez Bryant, means attending events like this one. He encouraged attendees to step out and make new connections, learn new things and throw old assumptions out the window.

The panelists, guided by moderator Mark Smelzer, publisher of JCK magazine and JCKonline.com, offered advice as they shared their experiences with attendees.

Takeaway One: Step Out of Your Comfort Zone

Each panelist’s path had one thing in common: it started when they stepped out of their comfort zone.

Baba Blumkin, president and co-founder of Luxe Jewelry and Loan, spent his early days selling diamonds door-to-door, carrying goods worth a quarter of a million on his back. “You learn to deal with people saying no,” he said.

Alexandra Hart, a metal artist and designer goldsmith, got her first job by sending her resume to every jewelry company she found in the yellow pages.

For some on the panel, discomfort wasn’t in facing the unknown, but rather in being trapped in the supposed “good life.” Tiffany Stevens, CEO and general counsel of the Jewelers Vigilance Committee (JVC), was only weeks into a dream law firm job when she realized she was at the wrong place. In the next two decades, she bounced from an investment firm to a startup, began a non-profit for at-risk girls and wrote grants for pediatric medical research, before finally landing at JVC.

Clar, a GIA Jewelry Business Management (JBM) and Bachelor of Business Administration (BBA) graduate, found his first job in the jewelry industry at a GIA Career Fair. This first job in wholesale opened the door for him to work in retail, and his experiences led him to be invited to speak on a Women’s Jewelry Association (WJA) panel. That’s where he met and was hired by his current boss, the designer Julez Bryant, who was a fellow WJA member and panel speaker.

Clar said he is bold about approaching people, because “sometimes you have that connection.” The people who liked him didn’t always have a position open at their company, but they created one for him. He said networking is the most challenging but also the most rewarding part of being in the industry.

Jenny Luker, president of Platinum Guild International and WJA, emphasized the importance of having mentors. She cited Kathryn Kimmel, retired senior vice president and chief marketing officer of GIA, as an inspirational mentor who has helped her over the years.

“This is a very open-arms industry,” Stevens seconded. “Look for people who are retiring who can be your champions. A lot of people love this industry and want to see it thrive.”

Takeaway Three: Work Hard and Pursue Your Interests (they may not be what you think they are)

Hart often hears people speak wistfully about their far-off dreams. Her answer: “If you really wanted to do it that much, you’d already be doing it.”

Hart’s two main passions are social justice and the arts. The challenge (or dream), she said, is combining both. A jewelry designer who is also the president of the Ethical Metalsmiths, she has managed to do what one student called: “improving the human cost of jewelry throughout the world” while remaining an “artistic wild-child.”

What makes Alexandra Hart come alive every day? “Shepherding” her different interests together. “The closer they come together, the better I feel,” she said. “It’s a rush.”

Smelzer’s advice to job-seekers: “Embrace the work in front of you. Don’t be afraid to start (over) from the bottom.”

Hart counseled along the same lines: “Working for someone else gives you a good idea of how you would want to do things yourself.” 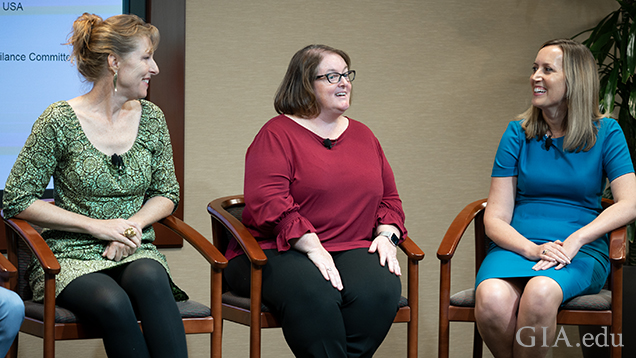 One habit these panelists have in common? They set aside time to learn.

Luker blocks out an hour every Friday morning, no matter how full her inbox is, to read or watch videos about the industry and to ask questions of her colleagues abroad. “People know not to schedule meetings for that time. They know that time is important to me,” she said.

Hart reads industry magazines, such as JCK or National Jeweler, every morning.

Smelzer enjoys reading and learning things on his cellphone, which he finds calming and anxiety-reducing. “In the two-thousands, a huge advantage we have is that the whole world is in our cellphones,” he said.

For Blumkin, every day is a learning opportunity. “Clients are always bringing in antique pieces on the fly,” he said, and he has to make quick decisions about what to buy and then identify the maker’s marks and time period of each acquired piece. “No matter how good you are, there’s so much out there, you can’t know everything.”

Stevens, who hails from New York City, said every day is an extracurricular activity. She never knows what note each day will end on, but she finds small ways of declaring victory.

Editor’s Note: To hear each speaker’s introduction about themselves in the video, reference the time stamps below:

Read about and watch the Opening Session of the 2019 Jewelry Career Fair in Carlsbad.

Phoebe Shang, a senior copywriter at GIA, is a Graduate Gemologist®.

Translating Passion into Success: What “Job Success in Today’s Market” is All About

GIA graduates share their career paths and offer tips and advice to students.

Interested in coming to GIA? Every year GIA's headquarters are open to the public
during one of the gem and jewelry's largest recruiting events held in Carlsbad, CA.