Translating Passion into Success: What “Job Success in Today’s Market” is All About

Career Fair, which is in its 28th year, featured 10 speakers, 25 career coaches and 42 jewelry company recruiters ‒ including Tiffany & Co. and Signet Jewelers ‒ and was attended by more than 600 students, visitors and job-seekers. The opening panel, “Job Success in Today’s Market,” featured four industry leaders who spoke about how their passion led them to where they are today.

According to Hucker, passion is acquired through education, perseverance and experience ‒ and is strengthened through networks built at industry organizations such as GIA. “You’ve got to find the things that attract you and be with them, make them a part of your lives,” he said.

For Meghan Simmons, director of operations at Omi Gems and Omi Privé, passion means communicating the provenance of gems and seeing “your own legacy [begin] to imbibe itself into those gems and jewelry.”

For Cathy Calhoun, owner of Calhoun Jewelers, a retail jewelry chain, passion means communicating the beauty and value of jewelry to your clients and to “have fun” while doing it.

To Mitchell Binder, president of the rock ’n’ roll jewelry brand, King Baby, and “go-to” jeweler for the likes of Johnny Depp, Bruce Springsteen, Slash and Aerosmith, passion means changing the world through jewelry, from the United States to Japan and China.

Each speaker shared their backstory and offered tips and advice to attendees. This overview of the panel includes time stamps that will take you to each speaker’s spot in the video. 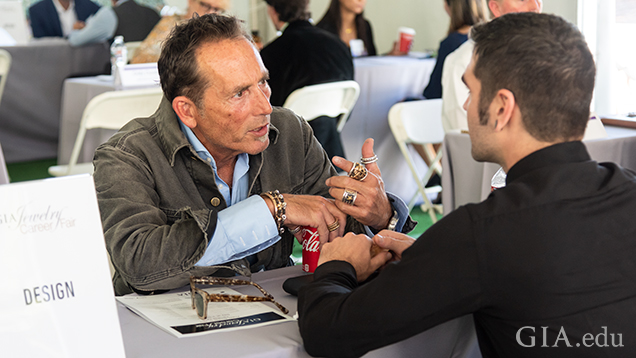 Hucker launched a career in colored gemstones because he loved color.

With diamonds, he says, you have to explain the 4Cs, but “when you show your customers five rubies, you don’t have to tell them which one is the best one … It just jumps out at you. It attracts you.”

He also spoke about marketing to today’s generation and finding a mentor.

Meghan Simmons found her path while helping out with the Elizabeth Taylor jewelry auction at Christie’s. It made her realize that, “your own legacy begins to imbibe itself into those gems and jewelry.”

That experience inspired her to ask: “What would it take to become a jewelry specialist?” The consensus was to get her Graduate Gemologist® diploma at GIA.

She connected with an employee from Omi at the 2015 GIA Career Fair while she was still a GG student.

“I introduced myself and he promised to keep me in mind. A few weeks, after I graduated, I got a call from Adam Graham. They were going to be operating two booths in Las Vegas and they needed help. I knew it would be an invaluable learning experience,” she said.

Simmons was hired by Omi right after. 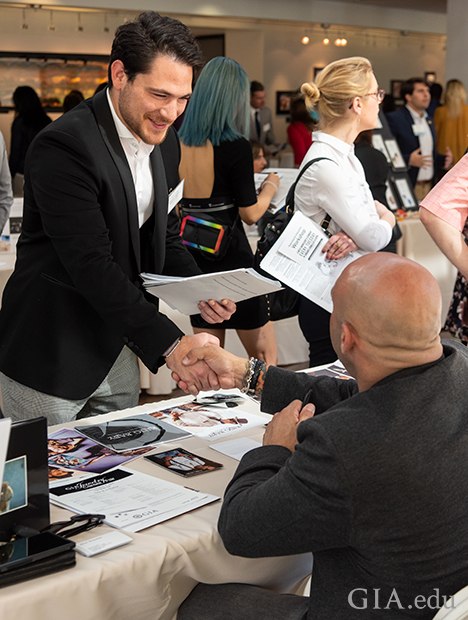 The world of gemstones and jewelry opened up for Calhoun in a surprising way—her jeweler boyfriend had a heart attack on Thanksgiving, the start of the holiday selling season.

“He’s in the hospital and he says to me ‒ you’re going to have to go run my jewelry store,” she said.

Calhoun, not understanding why diamonds of the same carat weight had different prices, started labeling and selling same-sized diamonds all at the same price, almost giving her boyfriend another heart attack.

But “just by sheer luck,” GIA was in town that weekend to do a two-day education symposium on gemstones and Calhoun said attending it changed her life.

“I knew what I was going to do for the rest of my life,” she said, so she immediately enrolled in GIA’s Graduate Gemology program.

Calhoun shared many of the fun and interesting events she has held at her stores, including her Carat Club for self-buying women, hosting car shows and Hippy Day and setting up a bar in her store.

Binder started out by hand-making jewelry for the Hell’s Angels: They were “not your classy diamond types,” he said.

His jewelry took off when Japanese buyers started bidding wars over his jewelry on eBay and two Japanese businessmen arrived at his small, 400 square-foot studio with briefcases full of cash, buying everything he had.

“It was like a drug deal,” Binder said. “I sold the jacket off my back. With the cash, I started King Baby.”

His next big break was when he was invited to pitch his jewelry at Neiman Marcus.

“You wouldn’t think that a guy like me and my designs would fit at Neiman Marcus…I had the biker rings and the skulls,” he said.

But the Neiman Marcus order quickly grew to over a million dollars and was on its way to two million before Binder stopped them and said he needed to figure out a way to hand-make all that jewelry.

Binder said his mother, who is a painter and a writer, always told him to “change the world,” and he has, by reaching the corners of the world through his jewelry. Not only does he have stores all over the U.S., but also 20 stores in China.

“I went from the black sheep of the family to the patriarch,” he said.

Hucker painted a hopeful picture of where the gem and jewelry industry is headed:

“You guys have an opportunity in making this industry better, cleaner, more giving and more loving because you have access to data that 10 years ago, none of us had. Don’t think that just because you know where a gemstone came from, that you’re OK. Find out what’s happening, where that gemstone came from,” he said “You’re going to become a part of the family, and you need to take care of that family.”

Read about and watch the Creative Careers panel from the 2019 Jewelry Career Fair in Carlsbad.

Phoebe Shang, a senior copywriter at GIA, is a Graduate Gemologist®.

GIA graduates share their career paths and offer tips and advice to students.

Interested in coming to GIA? Every year GIA's headquarters are open to the public
during one of the gem and jewelry's largest recruiting events held in Carlsbad, CA.