Alexander the Great commissioned his portrait – in the likeness of a god – to be engraved in stone in the third century BCE, according to jewelry expert Anna M. Miller, author of “Cameos Old and New.” This was the first time a cameo – a three-dimensional figure carved out of stone – was seen in Egypt. It is perhaps the first known selfie!

Cameo portraits of rulers and nobility or scenes of historical events have been highly valued ever since. Prior to Alexander, carvings were cut below the surface – intaglio – and used as seals of identification. The seals usually depicted animals of strength, such as lions or bears, and figures from Greek or Roman mythology. 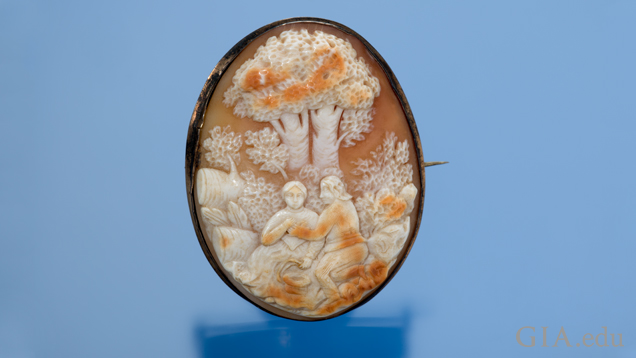 A courtship cameo shell brooch from the Georgian era shows depth of color and detail in a landscape scene. Courtesy of MMH Collection. Photo by Robert Weldon/GIA

Cameos can be carved in low relief (barely standing out from the background) or in high relief (projecting prominently above the background). Quality factors in evaluating cameos include the type of medium used, as well as the setting, condition, detail of carving, subject matter and signature of the artist.

Shell became a popular medium in French and Italian cameos during the Renaissance. Cassis rufa, known as cornelian, is a common type of shell used for cameos and varies in color from very light to deep brown orange. Cassis madagascariensis, commonly known as emperor helmet shell or sardonyx shell, is a thick, dark brown shell. It is the largest mollusk shell and resembles banded agate when carved.

The discovery of large deposits of carnelian (an inorganic rock that is different from the shell cornelian, which is organic) and agate in the Idar-Oberstein region of Germany in the 16th and 17th century spurred a renewed interest in cameos. Onyx, sardonyx, carnelian, jasper and quartz were widely used materials during this period and are ideal for carving because of their relative hardness and color zoning. 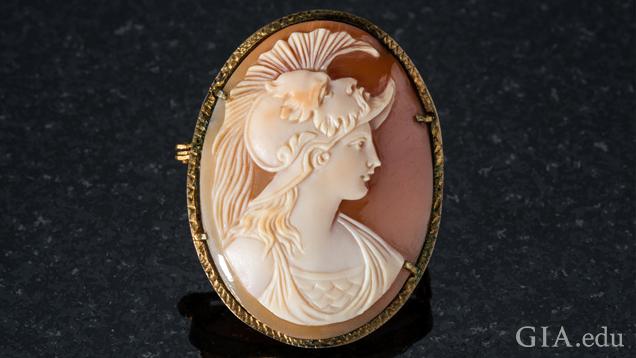 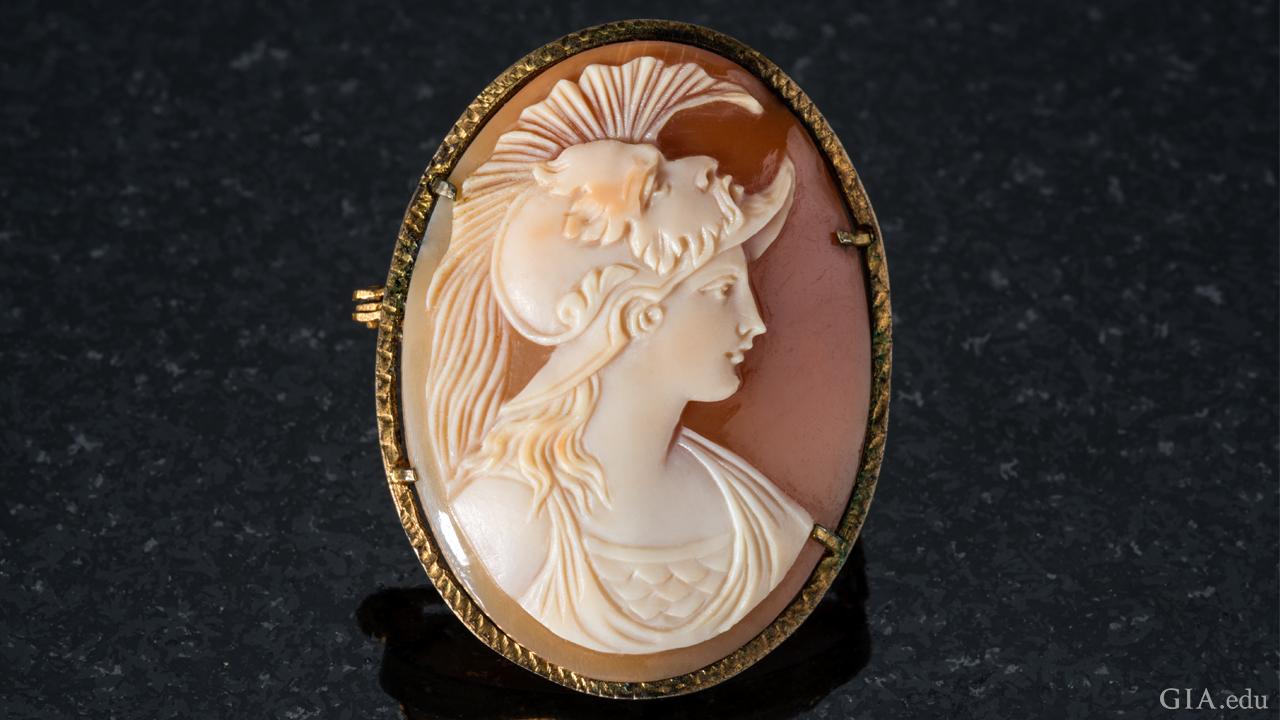 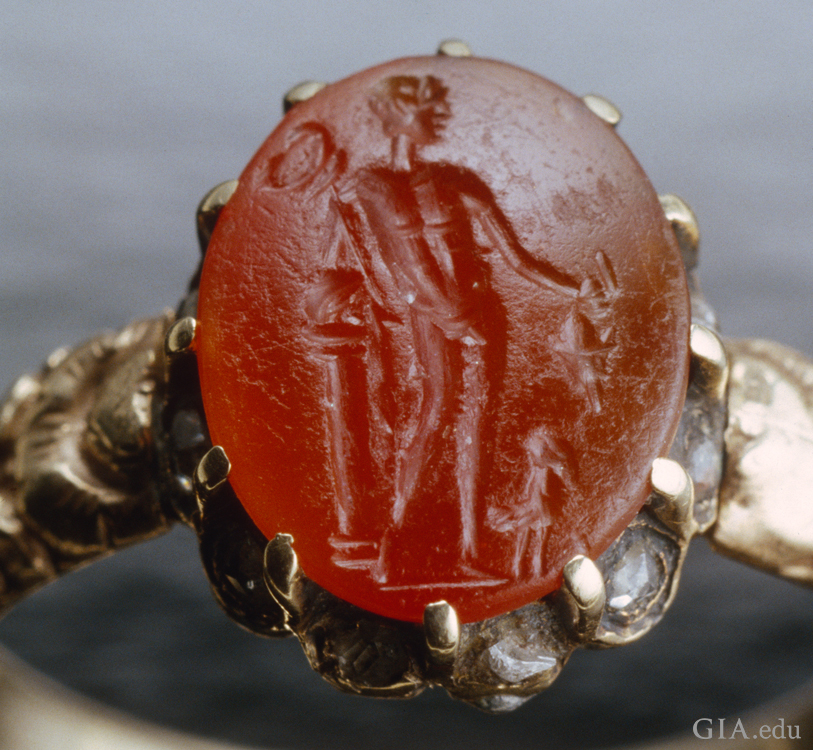 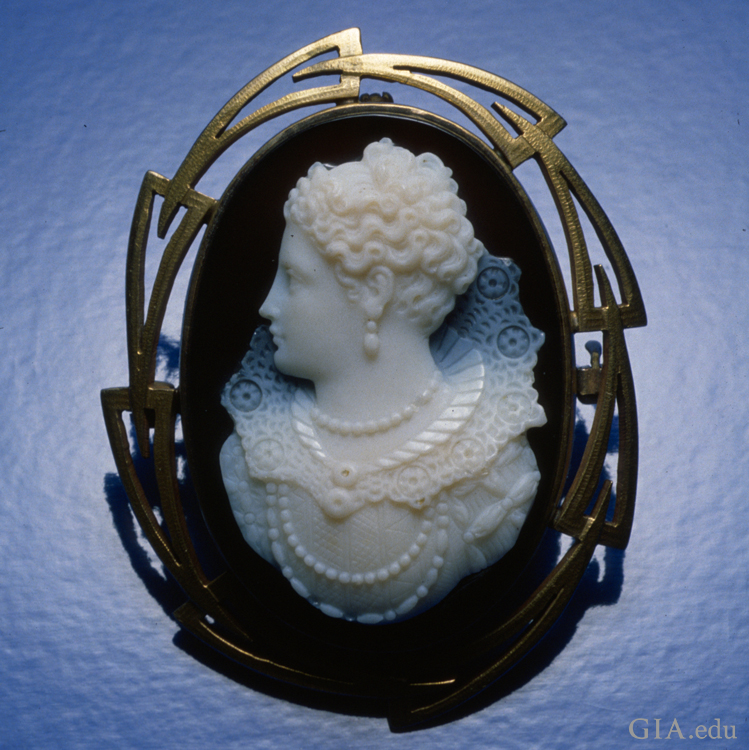 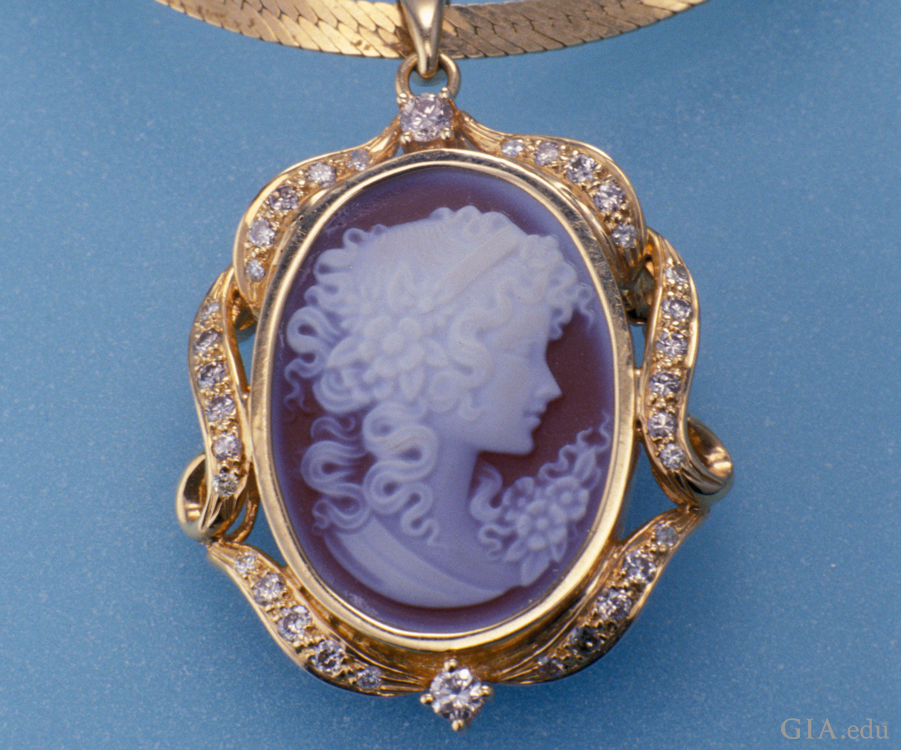 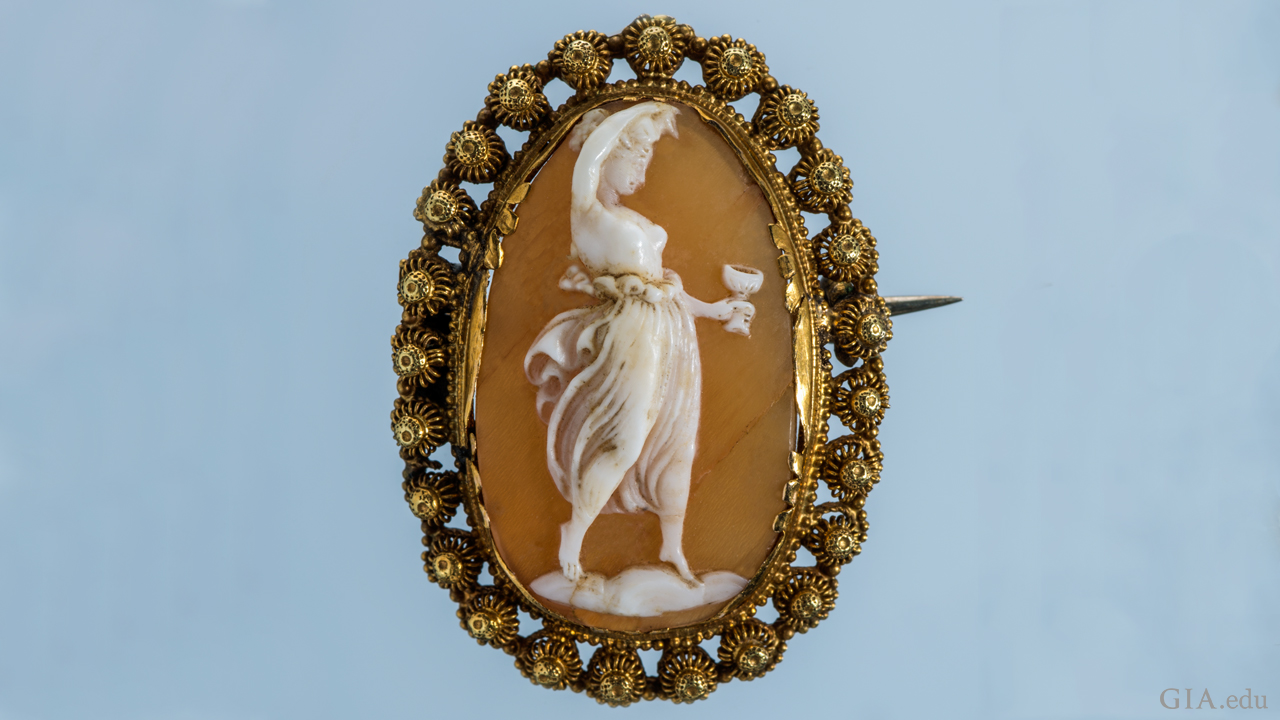 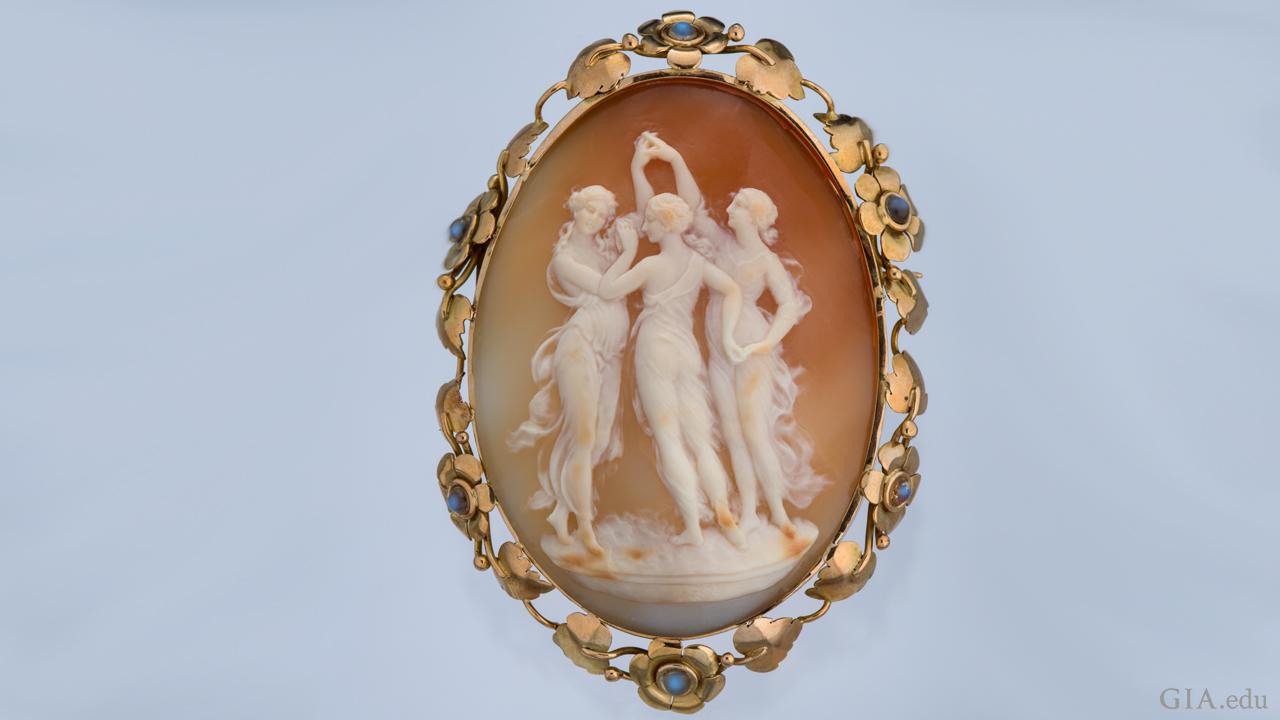 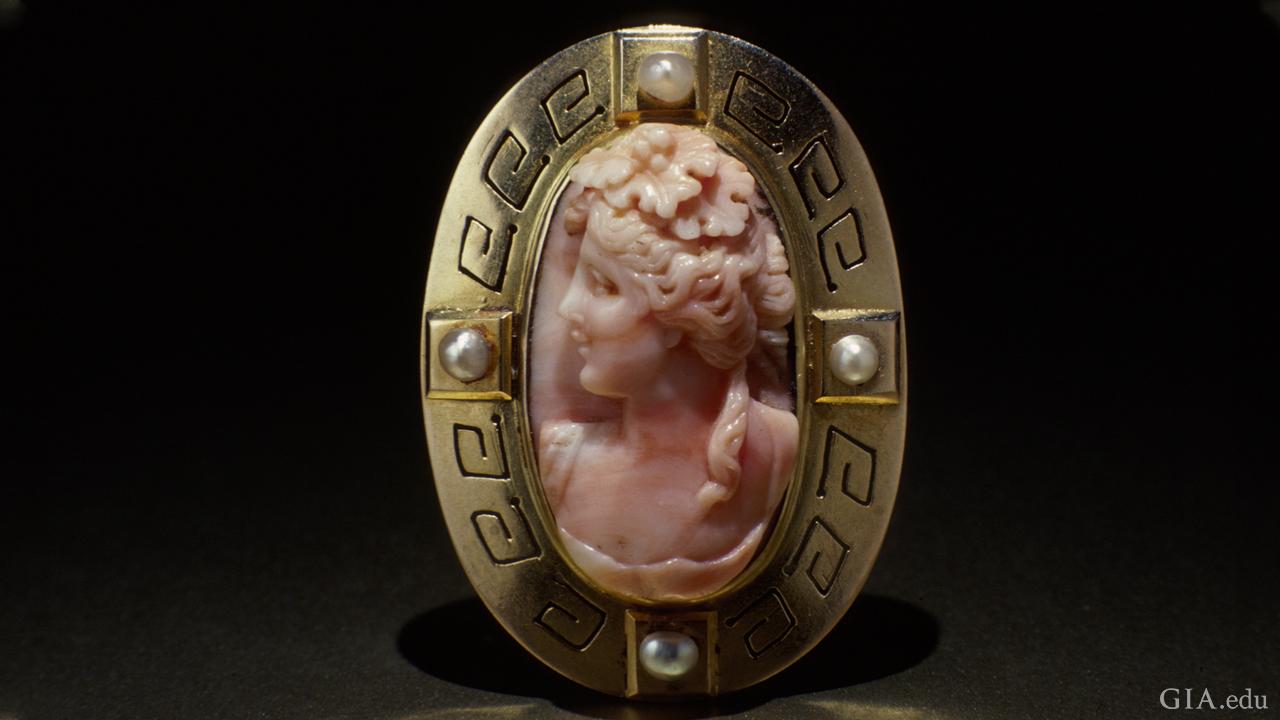 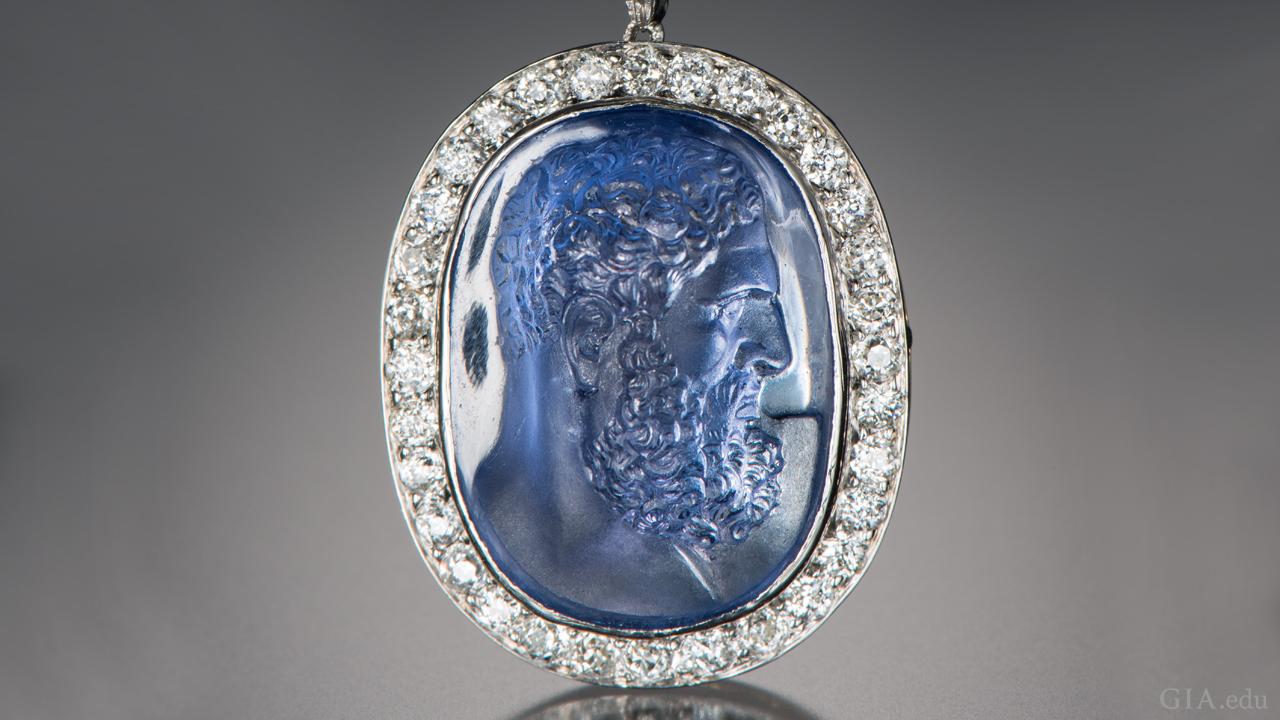 Cameos were popular in the Victorian era in England and Europe because Queen Victoria was fond of jewelry and favored them. Portraits of royalty and statesmen continued to be popular subjects, along with profiles of women dressed in finery, youthful maidens, religious icons and mythological gods and goddesses. Gem materials such as sapphire, garnet, jade, opal, coral and quartz gained favor for cameo carving in the Victorian era.

Queen Victoria went into mourning after Prince Albert died in 1861, but did not give up her penchant for wearing jewelry. She often chose jewelry made of jet, a fossilized form of coal. Lava cameos also rose in popularity as mourning jewelry during the Victorian era. Enterprising artisans realized that lava from the remains of Pompeii was a suitable material for carving cameos. These were sought after as a souvenir by status-conscious Victorians to show they had taken a European tour. Jet and lava are suitable for high relief carving – a quality factor in evaluating cameos – and are collectible. 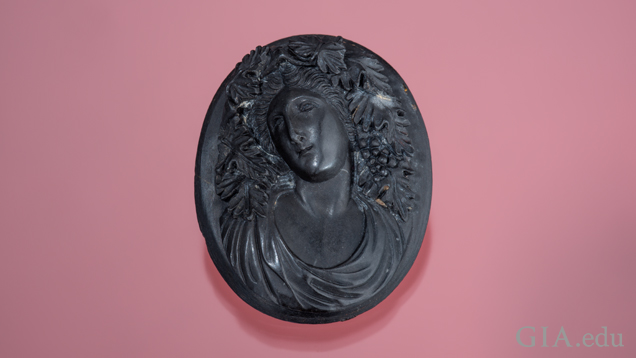 The goddess Bacchante is carved in high relief from black lava and shows fine detail of leaves and clusters of grapes in her hair. Cameos dating to BCE 79 were discovered in 1748 in the ruins of ancient Pompeii. Lava cameos were popular in Victorian England as souvenirs of a European tour. Courtesy of MMH Collection. Photo by Robert Weldon/GIA

Cameos continued to be popular after Queen Victoria’s death and artisans expanded their carving materials to include turquoise, ruby, lapis lazuli, aquamarine, peridot and topaz.

In the 19th and 20th centuries, Italian carvers Tommaso Saulini, his son Luigi Saulini, along with Giovanni Noto, were known to sign their work. The British royal family commissioned Tomasso Saulini to carve portraits of Queen Victoria and Prince Albert and his work is housed at the Victoria and Albert Museum in London. The Italian Republic commissioned Noto to create official gifts, including a work for the wedding of Charles and Diana of England. Most works by these masters of cameo carving reside in museums and private collections.

The rich history and lore of cameos make them a fascinating avenue into the world of collecting for history, mythology and jewelry buffs.

Jewelry that Speaks the Language of Flowers

A flower is one of nature’s most delicate delights, so it’s natural that jewelry designers have long found inspiration in them.
Read More