Over the last decade, the production methods used to create synthetic diamond melee have improved substantially, along with the quality of the specimens themselves. The increase in the amount of synthetic melee submitted—both disclosed and undisclosed—to GIA’s laboratories for identification has exponentially increased since GIA began offering its Melee Analysis Service in 2016. Parcels of melee are often submitted with a mixture of naturals and synthetics. Typically, a few synthetics are detected in batches of natural melee diamonds, known in the trade as “salting” (e.g., S. Eaton-Magaña and J.E. Shigley, “Observations on CVD-grown synthetic diamonds: A review,” Fall 2016 G&G, pp. 222–245).

GIA’s New York laboratory received a batch of 1,102 melee diamonds with a total weight of 9.67 carats for the melee analysis service. The tested melee ranged from 0.98 to 1.52 mm in diameter. Preliminary testing using GIA’s fully automated screening device referred 1,093 for further testing, while nine were found to be outside of the service criteria. Further analysis using detailed spectroscopic analysis confirmed 1,092 (figure 1) out of the 1,093 to be HPHT synthetics. Fourier-transform infrared (FTIR) absorption spectroscopy performed on the referred melee revealed an absorption band at approximately 2800 cm–1 from trace boron in the diamond lattice, classifying these melees as type IIb (boron-bearing), typical of HPHT synthetic diamonds. Due to the relatively high concentrations of boron, these melee diamonds showed a clear blue hue, which is very different from most of the melee diamonds we have tested. 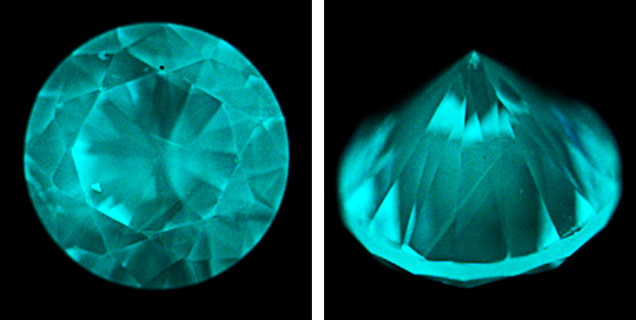 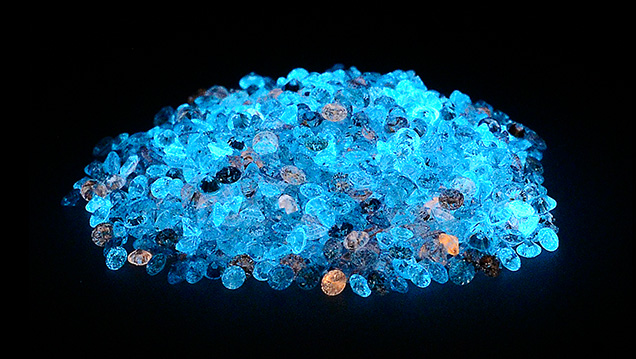 One sample out of 1,093 was confirmed as a natural diamond. Infrared absorption spectroscopy indicated this stone was type Ia, with a hydrogen peak at 3107 cm–1. DiamondView imaging displayed a typical blue fluorescence and no detectable phosphorescence, both typical for a natural type Ia diamond.

It is interesting to note that only one natural was found in this parcel of melee. This has been the largest percentage of undisclosed synthetic melee that GIA has seen. The majority of the HPHT synthetic melee had no detectable traces of Ni, demonstrating the importance of advanced testing to identify these melees.