One of the 2016 Tucson show’s most noteworthy gems was a 332.24 ct freeform Imperial topaz (figure 1) at the GJX booth of gem cutter Alexander Kreis (Sonja Kreis Unique Jewelry, Niederworresbach, Germany). Topaz with this red, pink, or orangy yellow color component is rare and highly sought after in the trade. Named the “Imperial Flame” by the Kreis family, the crystal was reportedly recovered from Brazil’s Ouro Preto topaz mines two decades ago. Topaz has been known from this area of Minas Gerais since 1768 (P.C. Keller, “The Capão topaz deposit, Ouro Preto, Minas Gerais, Brazil,” Spring 1983 G&G, pp. 12–20).

Although mining was extensive at Ouro Preto in the mid-1990s (D.A. Sauer et al., “An update on Imperial topaz from the Capão mine, Minas Gerais, Brazil,” Winter 1996 G&G, pp. 232–241), the Kreis family confirmed that there is currently no large-scale mining. They visited the area after a collector informed them of a 615 ct crystal with exceptional color and clarity (figure 2). According to their contact, the crystal is “old production” mined at least 20 years ago. After analyzing the rough over a period of four months, the family purchased it in December 2015 with the objective of cutting the largest, highest-quality Imperial topaz known.

Due to the gem’s perfect basal cleavage, cutters must avoid grinding the stone perpendicular to the cleavage plane, while also accounting for inclusions that might cause the stone to break on the wheel. According to Sauer et al. (1996), well-formed, largely inclusion-free crystals typically yield up to 2 ct per gram (5 ct), which is a 40% recovery rate. Cutting the Imperial Flame took approximately eight days, spread over a period of 3–4 weeks, to allow Kreis to make trial carvings with smaller Imperial topaz pieces to test his cutting concepts. The cutting process began with sawing off the included portions and grinding to shape the solid crystal (figure 3), followed by faceting and carving to produce the reflective, grooved surfaces. The fashioning process yielded a spectacular gem measuring 89.53 × 20.56 × 19.15 mm. At 332.24 ct, it had a finished yield of 54%. 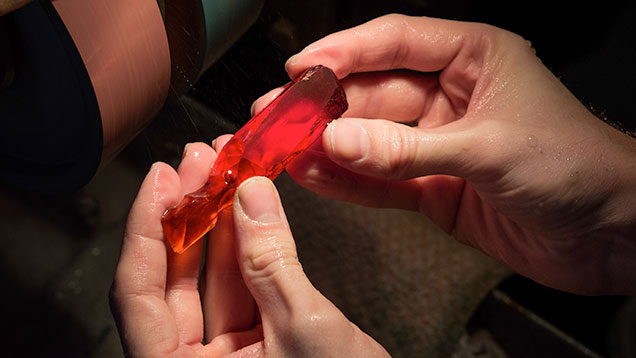 Figure 3. After trimming away included portions of the crystal’s base, Alexander Kreis gently removes any surface-reaching inclusions and begins to shape the crystal to his own unique design. Photo courtesy of Sonja Kreis Unique Jewelry.

Intended as an arresting gem sculpture for a connoisseur or high-end collector, the piece is for sale.

An Update on Imperial Topaz from the Capao Mine, Minas Gerais, Brazil