Sonja Kreis Unique Jewelry
In this video, Alexander Kreis displays his most recent designs: tourmalines in organic fluid shapes resembling the leaves in a tropical forest, citrines evoking the essence of sunrays, and icy blue topaz that mimic the cool brilliance of arctic ice.

At GJX, we caught up with gem artist Alexander Kreis (Sonja Kreis Unique Jewelry, Niederworresbach, Germany). It is a family business, with his father buying the rough, his mother designing the jewelry, and Alexander cutting the gems. Kreis had placed their best Oregon sunstone and their largest rutilated quartz pieces prominently in the booth to achieve a “wow” effect. Immediately beneath those signature pieces, Kreis had positioned more accessible gems that customers could use to make more affordable jewelry items. Although smaller than his trademark pieces, these were invested with the same precision and beauty. He produces pairs that would be ideal for earrings or even men’s cufflinks. Kreis spoke about three of these more accessible lines, involving tourmaline, citrine, and blue topaz.

For Kreis, green and pink tourmaline symbolize the colors of the rainforest, so their design evokes the vivid foliage and blooms of that environment. The curves provide a fluid elegance, and the cuts on the underside capture the veins and structure of tropical leaves.

Among Kreis’s new product designs for this year are citrines cut in a more angular style, with very detailed carvings on the back representing sunrays (figure 1). To Kreis, citrine’s color represents the heat of the sun, while the carvings channel its intense slanted rays. 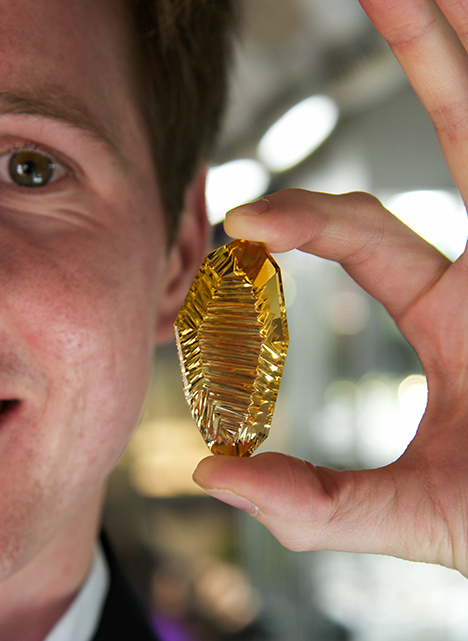 In striking contrast, another new design he called “frozen topaz” (figure 2) uses the icy hue of treated blue topaz to evoke arctic waters. The carving in the center is smoothly polished; the light rays, which are reflected from the polished carving, produce pinpoints of light on the gem’s frosted sides. The design and the material combine to produce an icy brilliance. As the wearer moves the gem, Kreis said, it produces “a harmony of light points dancing through the stone.” 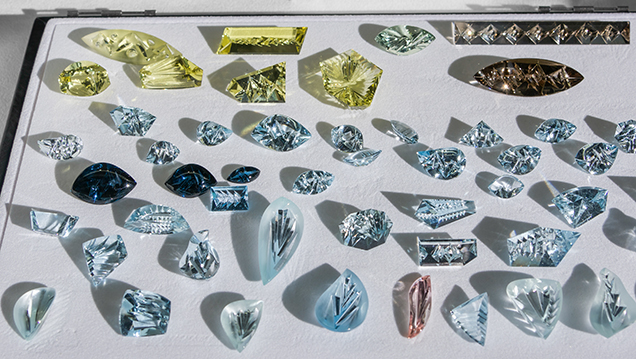 Figure 2. In these examples of “frozen topaz,” the smooth carvings contrast with the frosted textures and lend an icy brilliance to the finished gems. Photo by Duncan Pay/GIA; courtesy of Sonja Kreis.
About the Author