What it Takes to Mine Oregon’s Sunstone

It’s easy to think of southeast Oregon as the state’s 'empty quarter', where the towns are few and far between and it’s hard to get a mobile phone signal, but Kevin Schumacher, a GIA digital resource specialist and videographer, thinks that the landscape and the people mining for sunstone there make a unique and remarkable combination to the gem and jewellery industry.
“The contrast between the tall trees at the Ponderosa and the broad, wide valleys and dark rolling volcanic hills near Plush was striking, although both areas have a rugged, distinctive beauty of their own,” he said.
And the people?
“These guys have an extra dose of character,” he said. “You need a multitude of skills to succeed in the desert, and these folks really have it in spades. You have to be self-reliant … you need to prepare for the worst, but hope for the best.”
That’s especially true in 'the valley', the miners’ name for the Rabbit basin’s sunstone digging area, about 20 miles north of the tiny hamlet of Plush. The gravel roads there ‒ Hogback and the aptly named Nasty Flat ‒ are brutal to cars.
“Even to get there you need a tough vehicle,” Schumacher said. “Terry Clarke at the Dust Devil mine took one disdainful look at our SUV’s tyres and told us to get 10-ply rather than the 4-ply next time.”
They found out that he was right when their SUV suffered a puncture close to the Dust Devil mine. That’s when they got a glimpse of the miners’ true spirit and generosity.
“Whenever anyone’s in trouble, they’ll put aside any rivalries and help each other out,” Schumacher said. “These are not young guys any more, yet they had that tyre fixed in no time — nothing was too much trouble”. 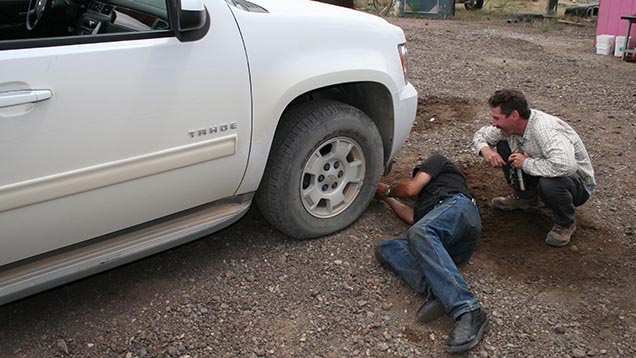 Schumacher watches as Dust Devil’s Terry Clark labours to fix a flat front tyre on the team’s SUV. Photo by Duncan Pay/GIA.
The logistics
“All of my camera gear fits into a small suitcase, and that pretty well fits into a standard overhead locker on a plane,” Schumacher said. “You have to check over all the equipment thoroughly: charge the batteries, take spares and carry plenty of memory cards.”
“I would hate to get out there and find a dead battery, or find that I’d forgotten something. I’ve no interest in being the weak link in the team!”
Schumacher said that being a video cameraman is a far from passive pursuit. “I listen to every word that the person on camera says during an interview. I’ll make sure that I capture any detail of the mining operation or landscape that they mention on film after we have finished the interview.”
“That way, I can be sure the finished video conveys the whole experience of being there,” he said.

A view along Hogback Road near the Plush sunstone area, not far from the Dust Devil mine. There was a downpour just after this photo was taken. Photo by Duncan Pay/GIA.
And what about the journey out and back to the mines?

“The Ponderosa mine is about a six-hour drive from Portland and only the last little stretch is on gravel roads. The Plush sunstone area is about 150 miles further south, and a good stretch of that is on gravel roads. The sunstone valley feels a lot more remote,” he said.
Remote and unpredictable. The group drove past brush fires further north, and a lightning storm lit the skies during the last night at Dust Devil. The miners were a little concerned that they might have to pull out because of fires, but it eventually rained heavily, so the danger of fire was averted.
“The drive out from the Plush area was memorable,” Schumacher said. “The heavens opened and all of the ruts on the gravel roads filled with water. Our truck was sliding around every time we touched the water, and we were a little concerned about the tyre that Terry had patched, but we needn’t have worried, it held up all the way back to Portland!”
Lasting impressions
“Each group of miners stuck in my mind: they’re all wonderful characters,” Schumacher said. “I’ll always remember sitting around the campfire sipping cinnamon bourbon with John Woodmark’s crew at the Ponderosa at the end of the first day of our trip.” 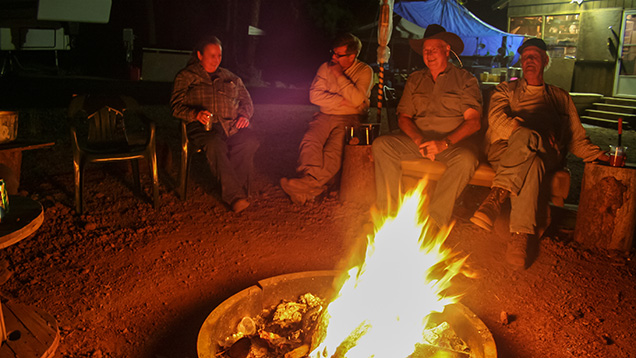 Not all of mining camp life is hard work. Everyone relaxes around the campfire at the end of the day to share experiences, have a drink and talk politics. Photo by Duncan Pay/GIA.
The next part of the visit with Don Buford, Terry Clark, and Mark Shore at Dust Devil was equally memorable.
“Don and Terry are Vietnam veterans. They choose to live in the desert for half of the year because it suits them: they love mining and they’re invested in making Oregon sunstone an American success story.”
“They showed us every facet of their operation and shared the ups and the downs, the challenges that they still face every day that they mine here,” he said.
Schumacher was amazed at how the miners use the smallest of signs to discover gems.
“They’ll look for tiny sunstone fragments in ant hills and differences in the vegetation,” he said. “Sometimes they even walk the desert for months to find a good prospect. And once they find the gems, they’ve often got to get them out of pretty hard rock without breaking them into pieces.”
In the end, which experience will he remember most about the trip?
“I think actually trying our hand at mining at Dust Devil the old-fashioned way was pretty instructive,” Schumacher said. “All of us were in the pit shovelling earth through screens, and it’s not long before you realise what a lot of earth you’ve got to move to find anything at all. I was lucky; I found a couple of nice ‘reds’: the other GIA guys weren’t so fortunate!”
And the miners and the unique gems that they seek?
“When we were leaving, Don shook our hands and told us that we fitted right in, which was the biggest compliment he could have paid us,” Schumacher said. “I’d go back there in a heartbeat! Maybe I’ll do a little sunstone digging on my own.”

The series concludes with a report on a new location for large green and bicolour gems.
Read More