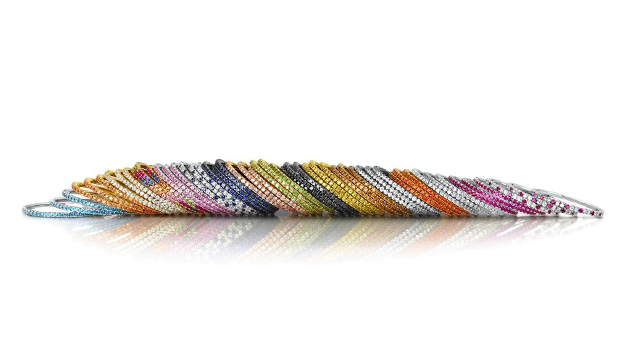 Q: Essentially, you are pretty quiet about dressing actresses during awards season. Yet, you are the no. 1 choice for many. Why do you think that is?

A: We’ve developed a relationship with both celebrities and stylists and so have not missed a red carpet in 24 years.

You know, we got on to the red carpet quite by accident. A client of mine who was also an actress called. “My co-star loves your jewellery and when I told her I knew you she said, ’Get him down to the set!’”

So I get down there and introduce myself, “Hi I’m Martin Katz.” And she says “Hi, I’m Sharon Stone.” She fell in love with a few pieces and said she’d let me know the next day what she wanted. The next day my client called, “Sharon wants to borrow the choker and the earrings for the premiere of her new film ‘Basic Instinct’.” I said, “I guess I misunderstood, I thought she wanted to buy them. I’m very sorry, please apologise to her, but I don’t loan jewellery.” Of course, my client was incredulous. I said, “Unless she’s wearing a sandwich board with my name on it, no one will know the jewels came from me. God forbid she loses something. I have everything to lose and nothing to gain, so please express my apologies.”

Later, I get a phone call from the head of Paramount – who happened to be my client’s husband – asking why I wouldn’t loan Sharon the jewellery. I explained and he said, “She insists on wearing your jewellery, so I’m in a bit of a bind. I have to ask if you’ll do it as a favour to me.” Of course, I couldn’t say no to a client, but I asked for a favour in return. “Will she be willing to wear my jewellery for the press shoots? Then at least I’ll get a byline.” 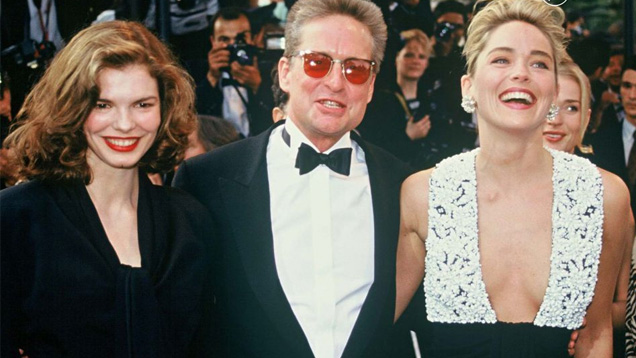 Jeanne Tripplehorn, Michael Douglas and Sharon Stone on the red carpet at the premiere of Basic Instinct in 1992. © Martin Katz, Ltd.

Of course it was a huge hit, she was on every cover in the world and I was right by her side giving her jewellery. Then the phones rang off the hook.

A: One year Salma Hayek and I worked out what she was going to wear to the Oscars about three weeks ahead. It was the longest lead-time I had ever had. She was going to wear some beautiful blue diamonds, something I was saving for an important event.

A: Three days or less. Ten years ago, eight years ago it was a few weeks, but now it’s literally two days or one day before.

Well, now it’s the day of the Oscars, and I get a frantic call from the stylist saying that they’ve broken the zip on Salma’s dress and she needs an entire wardrobe change. Two hours before she’s supposed to leave. I gathered up a range of all-new selections, ran up to their house and was literally securing the clasps as she was getting into the limo!

Another year Minnie Driver wore a beautiful ruby bead bracelet with a 30 ct. cabochon emerald – it had about ten strands of beads so it was about 2 inches wide. She managed to snag it on a chair and the beads went flying in the middle of the show. I learned later that she and director James Cameron were on all fours picking up the beads. They got ‘em all!

Q: How old were you when a diamond first caught your eye?

A: Ten. I was in Chicago with my mother in a jewellery store sitting around bored and my sister said, “Look at that! It’s a four carat diamond!” I do remember staring into that stone and being mesmerised, but I couldn’t wrap my head around what “carat” meant. Fast forward and I’m at university trying to think of an idea for something I could sell to all these students. When I told my room-mate, he said, “My brother sells puka shells and turquoise in Colorado, we could probably get him to send us some.” 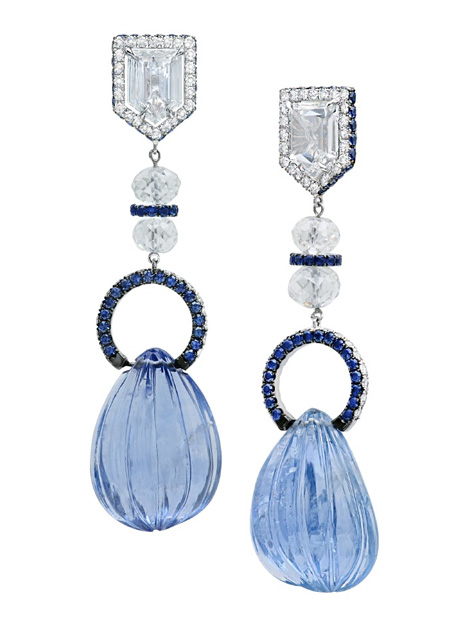 A: We would put them in a shoebox and I’d find a willing accomplice who’d invite all her female friends in the dorm and I’d sell stuff for $6, $10, $20 - it was big money. When I graduated, I moved to California thinking I’d use my university sales “experience”, but no one would hire me. I think I was asking for $5 an hour. But you would have had to be very experienced for $5 an hour in 1979.

A: You're right. So after everybody turned me down, I thought maybe I should call my aunt. She made an appointment with Laykin in Beverly Hills and he hired me for 5 dollars.

He understood I knew nothing, but he was all about hiring people he could train if they had a background he could trust. And I’m the same way to this day; if I can trust somebody, we can train them.

A: Yes, I’d prefer that they have GIA training rather than start from complete scratch about stones. But, trust is critical.

GIA holds tremendous value for me and I am proud to have my name on the gallery that displays The Bahia crystal at the Carlsbad campus.

Q: After holding some of the world’s most extraordinary Edwardian to Art Deco to Retro style jewels in your hands, which design era really gives you goose bumps?

A: Art Deco. I love it. I love the colours; I love the whole Egyptian Revival period. I love the buff top stones, the geometry. It’s what I love about the New York skyline – the deco elements of it. I can’t tell you how many times I’ve looked at the Chrysler Building and said, “I have to come up with something”. I've just created a new collection which is very deco oriented that I arrived at by designing the NY Palace penthouse suite. Looking out at the skyline from that vantage point, I was fascinated by all the shapes and colours.

Q: Similar to the view you’d enjoy as a pilot, which you are, right?

A: Yes. I don’t fly so much anymore, but it was just the greatest experience. When I was flying alone I’d get out of the air traffic control area, put the plane on autopilot and just look around at the view. Very peaceful. No mobile phones. No one can find you. It was great. I’ve started taking helicopter lessons just for fun.

Q: The inspiration of that skyline is clear in much of your work. So, let’s talk about what draws you to a stone.

A: It’s richness of colour, the depth of colour.

I like weird and unusual. I always ask stone dealers to show me what they can’t sell. Something out of the ordinary that allows me to add something very artistic to it. That’s when it becomes a piece of jewellery.

Q: Has a stone ever brought you to your knees?

A: Oh sure. A blue diamond. It was an Asscher cut 8 ct. vivid flawless that we bought from Prince Jefri Bolkiah when he had to purge his stones during the trouble with his brother, the Sultan of Brunei. We bought and sold that stone three times.

Q: What stone do you think is totally unsung?

Q: Isn’t the original mine in Brazil exhausted?

A: Yes, so the future is in Mozambique where they’re finding this tourmaline with the copper in it, but it just doesn't have the same intensity. They’re calling it another name, because technically if it’s not from Paraíba Brazil, it’s not a Paraíba.

Q: Your micro-set stackable bands were a game-changer and are now widely imitated.

A: Instantly. And so imitated that the idea burned out.

One of our biggest clients with this ring was Cindy Crawford. I used to make micro-micro-set rings for her – they were so small, they were like diamond dental floss. It was just fantastic. We would use like .06 - they were really quite something.

We still have clients who collect them. Those bands have never been out of my window since the first day I opened the Beverly Hills store. 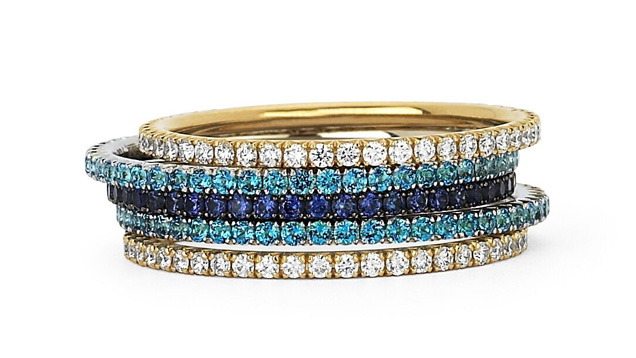 Q: You have said, “If I could match up all the husbands who want to spend with all the wives who want to wear, my business would be incredible.”

A: Yes, it’s weird. When a man loves jewellery, that’s when you’re really going to sell the most important pieces. I've just been speaking to a client of mine who about 11 years ago wanted to buy a blue diamond for his wife – a $1.5 million purchase at the time. That’s a $12 million diamond now! And his wife said, “I wouldn’t wear it. I’d rather have a pick-up truck.” Can you believe it? Those were her words!

Q: That was painful. You’ve kept your business discreet and exclusive for over 30 years. Strategy?

A: Well that’s a good question. Lately people have been inquiring about investing and I’m evaluating whether I want to become beholden to anyone. There are a few things we’ve been doing in collaboration. Victoria’s Secret, The New York Palace “Jewel Suite”, DKNY's “Golden Delicious” million-dollar perfume bottle and Ray Bans. I've just got back from Paris and have 5 fragrance samples for a candle and then maybe we'll produce an actual fragrance.

Q: And when you get that done, you’re going to fly off in your helicopter to…

Q: A great place to create your own boutique inn!

A: Now you’re sounding like my wife. When she comes up with these things I tell her, “This would be a perfect time to tell me you’ve been a billionaire all along and you’ve just been hiding it from me!”

Dawn Moore draws on her experience as Regional Director at Harry Winston, Mikimoto and Chopard to write about world-class jewels for The Huffington Post, C Magazine, The Los Angeles Times and Santa Barbara Magazine. Read more about her: www.mooreabout.com.

Collectors from around the world descended on Christie's auction of Al-Thani Collection jewels.