Knowledge at Any Cost

The Library’s oldest book is an encyclopedia from 1496 (standing upright, left), Pliny’s Naturalis Historia [Natural History]. Pliny perished in 79 CE and content of his encyclopedia is one of the earliest, and most celebrated, academic treatises of all time. It was the foundation of all science until the Renaissance.  Pictured above are various editions of Pliny’s Naturalis Historia, ranging from 1496 to 1826.

So Many Books, So Little Time 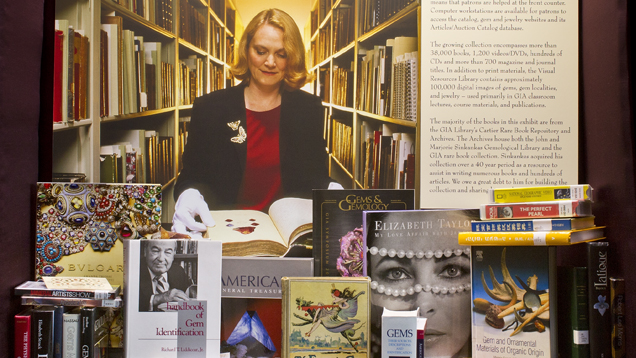 This exhibit contains more than 26,000 pages of information spanning over 500 years. The GIA Library is the premier resource for information on all aspects of gems and jewelry. As of July 2014, the growing collection encompasses 57,000 books, over 1,800 videos, hundreds of CDs and over 700 magazine and journal titles in the 8,000 square foot library. In addition to print materials, the Visual Resources Library comprises over 150,000 digital images of gems, gem localities, and jewelry which are used primarily in GIA course materials, classroom lectures and publications. The combination of all these resources allows GIA to fulfill its educational mission.

Tavernier was a French merchant and jeweler who combined gemology and travel writing to chronicle his exciting journeys through Turkey, Persia, and the East Indies. At 71 years of age, he documented his adventures from 1631-1668 in his seminal work Les Six Voyages de Jean Baptiste Tavernier. His fascinating accounts of these exotic lands include descriptions of the spectacular gems he examined. 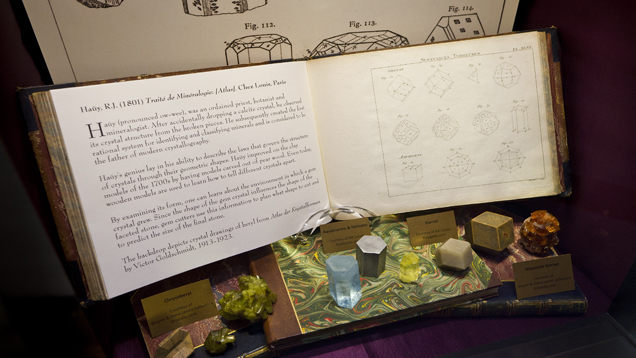 René Just Haüy lived from 1744 to 1822 and was an ordained priest, botanist and mineralogist. After accidentally dropping a calcite crystal, he observed from the broken pieces its crystal structure. His curiosity caused him to expand that study to a number of minerals and developed a mathematical theory which was published in 1801, the Traité de Minéralogie. This was also the first rational system for identifying and classifying minerals. He expanded on that in Traité de Cristallographie published in 1822. In order to describe crystals, he created a system of indicating the different faces. Today Haüy’s law is also known as the law of rational indices. Pictured above are crystal models of wood and metal interspersed with crystals of aquamarine and heliodor, chrysoberyl and hessonite garnet.

Russia’s Treasure of Diamonds and Precious Stones documents the regalia and crown jewels that were collected over 228 years by the Romanov family. The inventory, overseen by the noted Russian mineralogist A.E. Fersman and published in 1925 by the Bolshevik government, was printed in three versions: Russian, French and English. While we do not know how many catalogs were produced, less than 20 copies are known to exist today. GIA’s English language copy is housed in the Cartier Rare Book Repository & Archives and has been scanned for viewing in the library. One plate from this catalog, an imperial diadem, is the centerpiece of this display.