What Country Do My Diamonds and Other Gemstones Come From?

“Since 1931 (GIA’s founding), we have shared everything we have learned with you.”

“It is the best short description of why GIA is here,” said Shigley, who is GIA’s distinguished research fellow and holds a Ph.D. in geology from Stanford University. Shigley proceeded to share everything (or many of the things) he’s learned about gemstone origin in his 37 years working in GIA’s research department. He focused most of his presentation on colored stone origin identification, which is detailed in a special Winter 2019 issue of Gems & Gemology (G&G) on country of origin.

“Country of origin reporting [for colored stones] is probably the most difficult challenge we have in the lab for identifications purposes,” Shigley said.

GIA researchers are uniquely able to offer insight into colored gem origin, he explained, because of the sheer volume of stones they see in the lab and in the field. In the past decade, GIA field researchers have gone on 95 field expeditions to 21 countries and collected more than 22,000 samples totaling more than 1 million carats. GIA also has 60 researchers on staff, including more than 20 with doctoral degrees in fields such as geology, chemistry and material science.

The knowledge gained from these field expeditions is part of the “foundation” of the information GIA can provide to the gem trade in its colored stone report service, Shigley said. The GIA Colored Stone Identification and Origin Report has been around for decades, but the GIA Diamond Origin Report is relatively new. 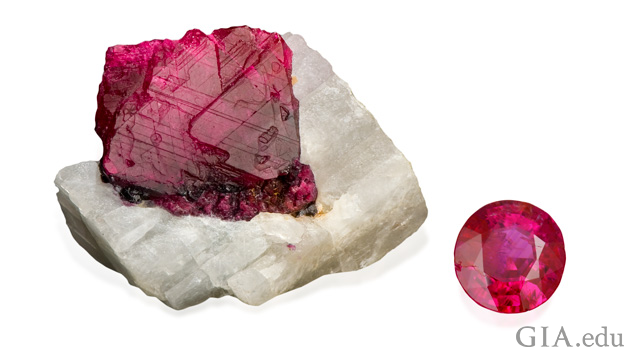 A ruby crystal in calcite, left, and a round cut ruby, both from Myanmar (formerly known as Burma). Specimen courtesy of the Dr. Eduard J. Gübelin collection. Photo by Robert Weldon/GIA

How Does GIA Determine Where Colored Gems are From?

The assumption is that stones from different places should have different gemological properties he said, but it “doesn’t always pan out that way.”

Shigley reviewed some of the challenges of country of origin reporting for colored gemstones:

“What these challenges show,” Shigley said, “is that the geology determines the gemological properties — the inclusions, the chemistry and all of the other properties of the gem material.”

Country or geographic origin reporting began in the 1950s when the famous Swiss gemologist Eduard Gübelin started to provide letters about where the stones his company was selling came from, Shigley said. Gübelin also wrote a series of articles for G&G on how inclusions can help you determine where colored stones come from. 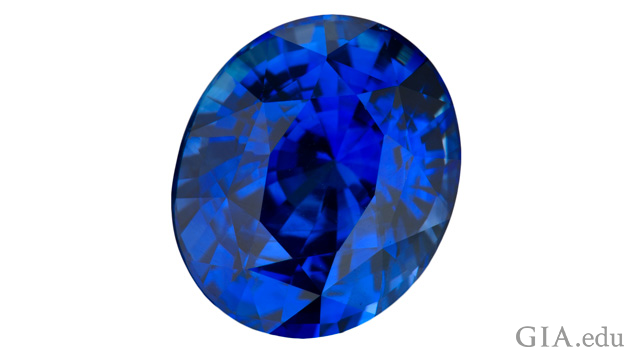 Building on what researchers have learned and documented in the past, GIA created a field gemology program a decade ago to “go to where the gems are,” Shigley said. They are collecting samples to build a reliable database, videotaping and photographing the area and interviewing miners to get a complete picture of what’s going on in that particular time and place. He said this program is the foundation of GIA’s Colored Stone Country of Origin Reports, and it provides valuable information for GIA education courses.

While colored gemstones continue to be found in Australia, Brazil and Columbia, in many cases today they are found in two regions of the world. The first is the arch of countries between the Indian subcontinent and Asia (Iran, Pakistan, Afghanistan, northern India, Myanmar, Cambodia Vietnam and Thailand) that represent the collision zone between India and Asia — this collision zone produced the metamorphic and magmatic conditions necessary to form gem deposits. The second region represented is Eastern Africa (Ethiopia, Somalia, Kenya, Tanzania, Madagascar, Mozambique), as well as Sri Lanka and southern India — another continental collision zone with the right geologic conditions that produce gem deposits. 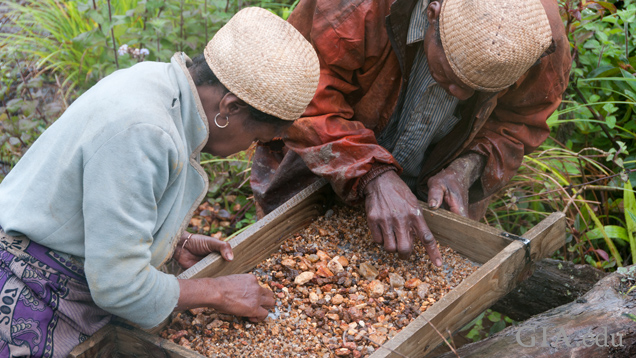 Two Madagascan miners look through river gravel for sapphires. This photo was taken on a GIA Field Expedition to Madagascar in September 2010. Photo by Vincent Pardieu/GIA

GIA field gemologists travel to these countries to collect gem specimens for research. These specimens are classified according to how closely they are collected to the source:

Most of the samples GIA collects are Type D or E, supported by types A, B and C when available. These samples are taken back to the lab so researchers can study their color, fluorescence, inclusions, growth zoning, chemical composition, spectra (visible and infrared), Raman spectroscopy and photoluminescence. These stones are also photographed, often at 100x magnification, so their inclusions and other visual features are recorded. The data collected lets scientists determine the cause of color in the gem material at hand, which helps to determine origin or to classify gemstones into different types. 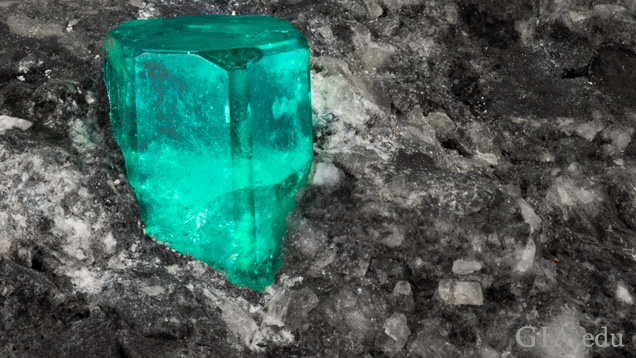 This emerald crystal buried in its host rock was found in Colombia, the world’s largest producer of emeralds. Photo by Orasa Weldon/GIA

The instruments needed to collect all of this data, such as the scanning electron microscope and the laser-ablation mass spectrometer, cost anywhere from $100K to $1 million each. Some of these instruments are able to detect very tiny quantities of trace elements in the parts per billion (PPB), and can pick up elements that are unique to certain countries of the world. The greatest challenge in collecting data on gemstones is using non-destructive ways to analyze gemstones.

Another challenge to gemstone origin determination is that countries are continually being added to the list as gemstones are discovered at new locales, so GIA field researchers are always on the march to document more gemstones. Shigley used ruby as an example of how the discovery of new deposits have increased over the years: in 1950 there were eight known ruby sources in the world, today there are 30.

“They don’t necessarily produce the best quality of material, but material from all of these deposits are in the market and may show up here for an origin report,” he said. “The challenge is the growing number of localities with very different geology — and sometimes with very similar geology.”

“The database is accessible in GIA’s identification laboratories for comparison with client stones for country of origin services. Each expedition expands the database and improves the reliability of the reference collection and GIA’s laboratory services.”

Can GIA Figure Out Where a Diamond is From?

“We cannot tell where a diamond comes from based on the diamond itself,” Shigley said.

Certain mines, however, are associated with a certain size or quality of diamond, e.g. the Cullinan Mine in South Africa, which is renowned for having produced several legendary large, high-clarity diamonds, including the Cullinan, the largest diamond rough ever found. The Argyle Mine in Australia has been the world’s primary producer of pink diamonds for decades.

The 302.37-carat Graff Lesedi La Rona diamond was found in Botswana. The provenance of large, high-quality, record-breaking diamonds tends to be easier to track. Diamond courtesy of Graff and photo by Donald Woodrow

Shigley outlined the main reasons why it is impossible to determine the geographic origins of diamond based on gemological and scientific examination.

Where they form: Diamonds form deep in the Earth, where conditions are more homogenous. Also, there aren’t any distinctive mineral inclusions associated with any particular location.

Diamond structure, chemistry and analytical challenges: Diamonds are made up of carbon and sometimes a small amount of nitrogen and boron, which are next to each other in the periodic table, Shigley said, so the atoms are about the same size and can easily substitute for one another in the diamond structure.

“Diamond is a very close-packed tetrahedral arrangements of carbon atoms that are held together by very strong short, covalent bonds,” he said. “It is hard to get other trace elements into the diamond structure in very much quantity. [If they are there] they are very trace amounts in the parts per billion level.”

Additionally, analysis of trace elements in diamonds requires sophisticated analytical equipment and a method that may destroy part of the diamond sample. Spot analysis can be done using Secondary Ion Mass Spectrometry (SIMS), but this is “probably a million-dollar piece of equipment” usually only found at universities — GIA does not have one, Shigley said 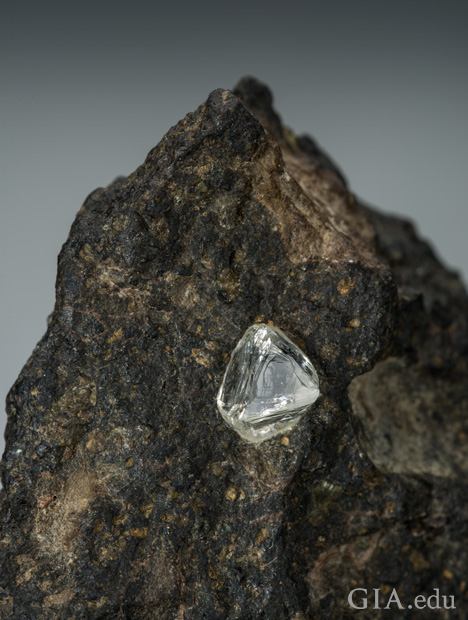 A piece of diamond-bearing kimberlite from South Africa. Photo by Robert Weldon/GIA

Weathering: Some diamond deposits are secondary, where the diamond is recovered from a river or sediment by panning. Diamonds are brought to the Earth’s surface by an explosive eruption that forms a volcanic pipe filled with diamond-bearing igneous rock known as kimberlite. Kimberlite weathers quickly, releasing the diamonds and they go downhill, either by gravity or water, and are then carried by river systems downstream — possibly hundreds of miles away — or incorporated into sedimentary rock.

“The river takes them many miles away from their original pipe location, so we don’t even know where the pipe was,” Shigley said. “And of course, the river crosses many countries. In South Africa, it [the Orange river] transports them all the way to the Atlantic Ocean.”

Lack of a distinctive surface appearance on rough diamonds: Experienced diamond sorters at DeBeers might be able to tell which company mine a rough diamond came from based on its surface features, but this isn’t an exact art and the stones are unrecognizable once surface characteristics are removed in the gem cutting process.

Shigley said the real problem of diamond origin is: Where are you going to get diamonds to study to develop your criteria for country of origin identification?

“There is no database of rough diamonds available to anyone to tell where they are from and I don’t know of any way, scientifically, to tell where a polished diamond comes from,” he said.  “The database of samples, if it existed, would provide a source of information to try and develop ideas for country of origin determination for diamonds,” he said, adding that the lack of diamonds from secondary alluvial deposits “is a particular problem because of the lack of organized mining efforts and the random finding of diamonds.” 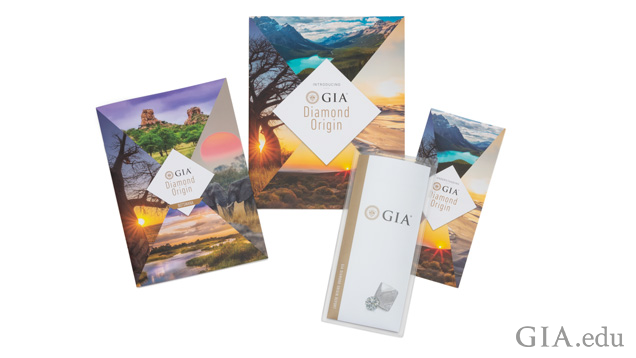 The Diamond Origin Report offers a 4Cs quality analysis as well as confirmation of origin to the gem trade. Pictures of the original rough can be viewed online or on the 4Cs app.

It’s in the leap from rough to polish that GIA breaches the gap. GIA works with diamond mining companies in major diamond-producing countries such as South Africa, Russia, Canada, Namibia, Lesotho and Australia to offer the GIA Diamond Origin Report Program to the gem trade.

“It’s more of a matching service,” Shigley said. GIA takes a rough diamond that comes in a sealed parcel from a client or program participant with its required origin documentation. GIA characterizes it so it is able to later match it to a cut stone submitted for the origin service. The country of origin information confirmed on the report comes directly from the mine.

‘We are saying [on the report] that this is where it is from and we can definitively match it with the original rough diamond,” Shigley said.

GIA matches the gems to their original rough according to their size and color, measurements, gemological observations, absorption and luminescence spectroscopy, fluorescence imaging and information in the GIA database. Each GIA Diamond Origin Report also contains a 4Cs quality analysis in addition to a statement of origin.