The Real Gemology of Ethiopian Opals in ‘Uncut Gems’

The magical quality of opals is the central metaphor of the 2019 movie “Uncut Gems,” starring Adam Sandler. A giant piece of Ethiopian opal, still in its matrix, is smuggled to New York.

“They say you can see the whole universe in opal, that’s how … old they are,” Sandler’s character, Howard Ratner, a jeweler and gem dealer on 47th Street in New York City, tells basketball star Keven Garnett when he shows the opal to him. Garnett is captivated to such an extent that he cannot play well without owning it. 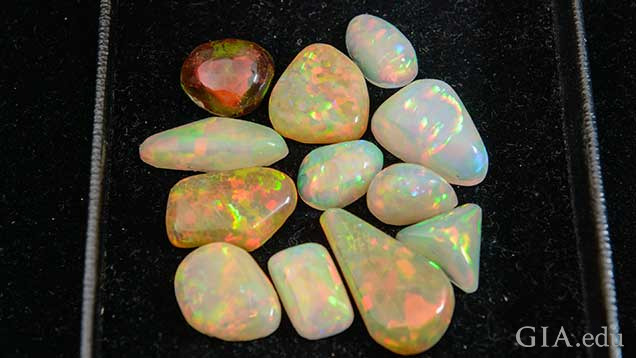 Ethiopian opal ‒ the featured gemstone in the movie “Uncut Gems” ‒ was first discovered in Ethtiopia in 1994. Photo by Eric Welch/GIA

With opals, as with most gemstones, the final polished stones weigh only a fraction of their rough form. The specimen shown in the movie appears to have several opal nodules (though probably not black opal) inside the matrix of host rock, but that host rock appears to account for the majority of its volume. This means that it would be very difficult – in real life – to evaluate the opal and appraise its value until the matrix was removed.

“In real life, the opal nodules must be shaped and polished into gems after removing the valueless matrix, which often results in much more weight loss,” explained Nathan Renfro, GIA Graduate Gemologist® and manager of colored stone identification services at GIA. “Any realistic valuation of rough gem material is based on the potential for yielding polished gems and the risk involved in fashioning finished gemstones.”

Adding to that risk is the fact that, unlike most gems, opals are not stones or minerals.

Opals are formed from centuries upon centuries of seasonal rains that leach microscopic silica particles from sandstone, carrying them deep into underground fissures and cavities. As the deposited materials dry, the microscopic silica spheres become compressed into a closely-packed lattice. As light travels through this microstructure, it creates a dazzling kaleidoscope of flashing rainbow colors, called play-of-color. 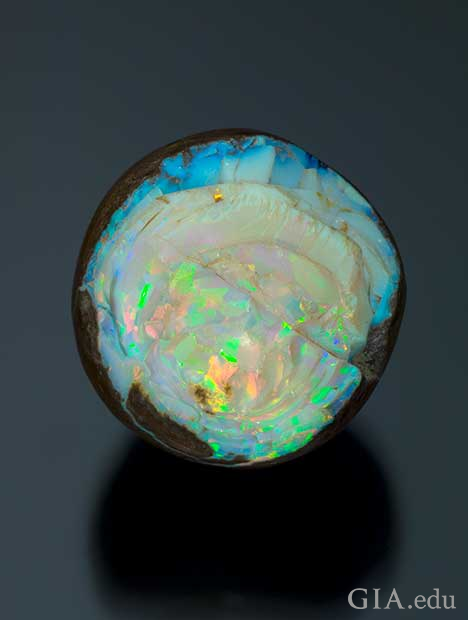 The opal that beguiles the main characters in “Uncut Gems” was still in its matrix, similar to this piece of rough opal in matrix. Photo by Robert Weldon/GIA

The Many Colors and Types of Opal

There are five major types of opals:

Australian opal is best-known and the country remains the most prolific source of opals - mainly white and black. Ethiopia is the newest source, with the first discovery in 1994.

The most prolific source – which was named in the movie – was in found 2008 near a town called Wegal Tena in Wollo Province. This material, mostly white opal, was formed from the silica from ancient volcanic ash. Another deposit, producing black opals about 30 miles to the northwest of the Wollo mine, was discovered in 2013 – a year after 2012, the year in which “Uncut Gems” takes place.

GIA has reported extensively on opals for many years and much research can be found in this Summer 2019 Gems & Gemology chart.

Flashes and Flames in
Ethiopian Opal

Boulder opal is becoming more and more popular. Australia’s central Queensland is the home of more than a dozen of sources of this stone. Come with GIA field gemologists to find out more about this unique gem.

Outlook on Opals from Mexico and Australia

Emil Weis Opals (Idar-Oberstein, Germany) opened its doors in 1905, making it the oldest opal cutting company in the world. Idar-Oberstein was the only global gem cutting center at the time, and opal buyers from all major gem markets had to send rough there for cutting.

Opal from the Shewa Province, Ethiopia