Celebrity jewelry designer Jade Jagger sent many jewelers to their glossaries when she introduced a line of jewels featuring “polki” diamonds a few years ago.

Polki diamonds are, in fact, one of the oldest forms of cut diamonds, originating in India long before Western cutting methods were seen there. They often retain their original rough form and have an unfaceted, polished surface. Although they have remained in use in traditional Indian jewelry designs − mainly fashioned for wedding pieces − Western designers like Jagger, who is based in London, and others have begun to incorporate these classic gems into their pieces.

The appeal, according to another London-based designer Sally Agarwal, “is that they generally are cut to follow the original rough stone so no two are alike and they impart a distinctiveness that makes each piece unique.” There’s another reason she is drawn to these diamonds. “They are very flattering to the wearer because the light they give off is much softer compared to the sparkle of modern cuts.” 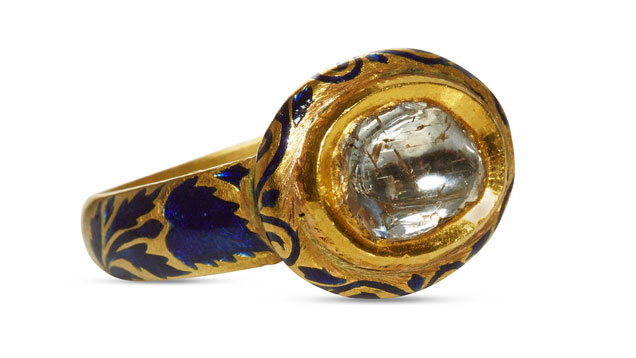 India is the original source of diamonds, with historical accounts of finding the gems dating back 3,000 years. It was the first major culture to value and wear diamonds and many of the world’s legendary diamonds were unearthed there – the Hope Diamond, Koh-i-Noor, Wittelsbach-Graff, Sancy and Regent are the best known.

British jewelry historian Jack Ogden noted that one of the earliest accounts of gem cutting in India was made by the noted Persian scholar al Biruni, who visited India about 1020 CE and wrote that cutters used emery, a dark granular mineral usually composed of powdered corundum, manganite and possibly spinel or hematite, “for cutting, filing and polishing stones.” Of course emery (ranging 7 to 9 on the Mohs scale), could not facet diamonds (10 on the Mohs scale), so cutters used it to polish the surface of the rough stones.

Ogden wrote that it is not entirely clear whether ancient and medieval Indian cutters knew to use diamond powder for cutting, but noted that as much as 700 years later many Indian cutters were still using emery mixed with oil, so cutting techniques had apparently changed little as well. Most diamonds and gemstones were worked on a stone wheel, set vertically. The polisher pushed and pulled on a bow attached to the wheel, turning it back and forth instead of continuously rotating, while holding the stone to be polished with his other hand.

Portuguese explorer Vasco da Gama is usually given credit for leading the first European expedition to establish regular contact with India in 1490. When John Baptiste Tavernier arrived there 200 years later on his famous voyage, he found a flourishing gem trade, including diamonds. By then, some Indian cutters had learned how to cleave diamonds and apply shallow facets using emery and diamond powder on their polishing wheels, according to Tavernier. He called these Mogul cuts, which generally took the form of near-rectangles with beveled edges, lozenge or uneven oval and pear shapes. The latter two had small, angled facets, according to Ogden. A slight adjustment fashioned a faceted crown on top of a flat base and were called polki cuts.

The following centuries saw a growing trade between the West and India; the royalty who ruled the country’s various principalities became regular patrons of the major European master jewelers. The royals purchased many diamonds cut and polished in Europe, which were the forerunners of modern brilliant cuts. 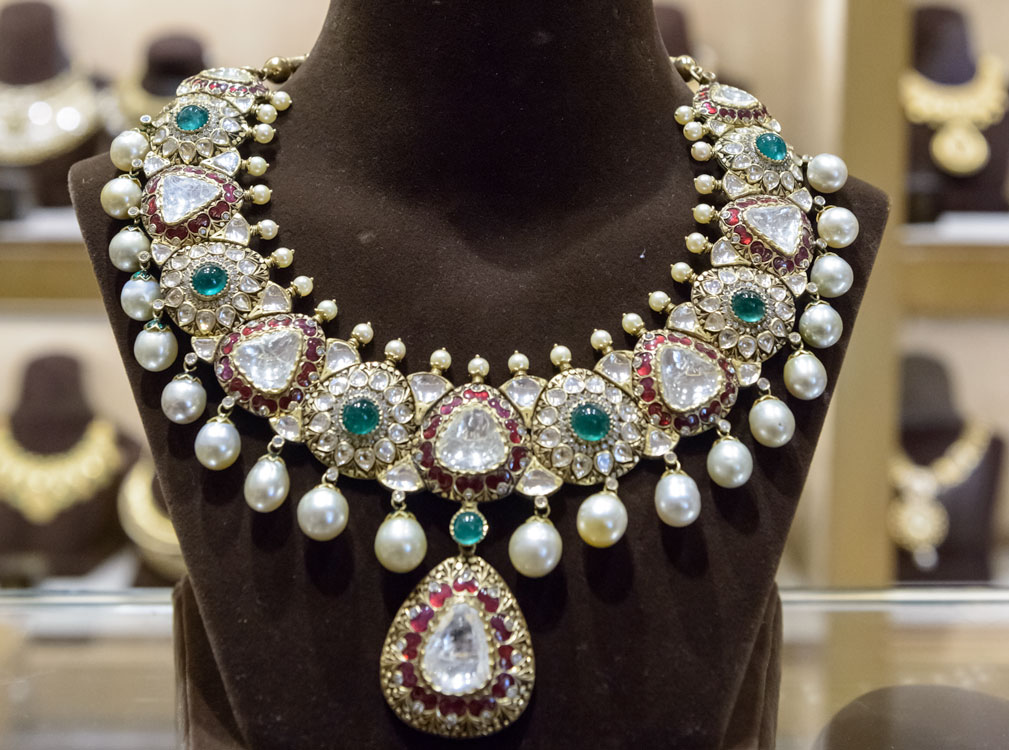 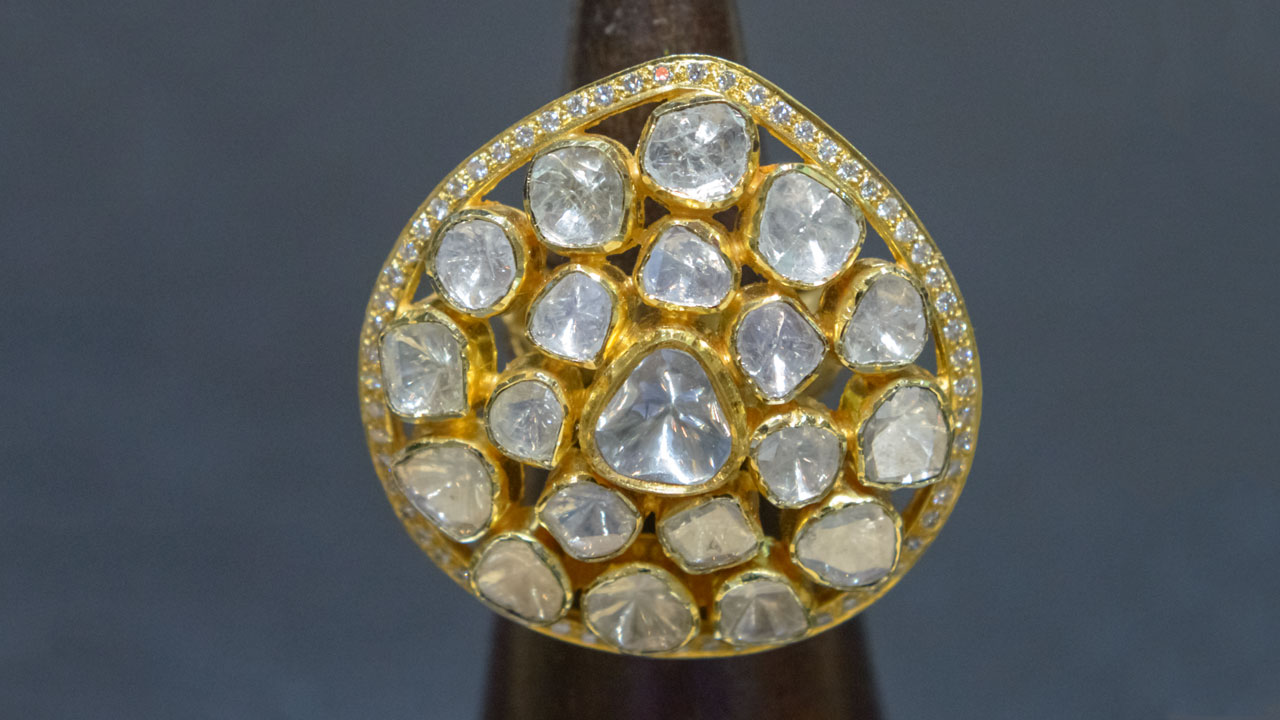 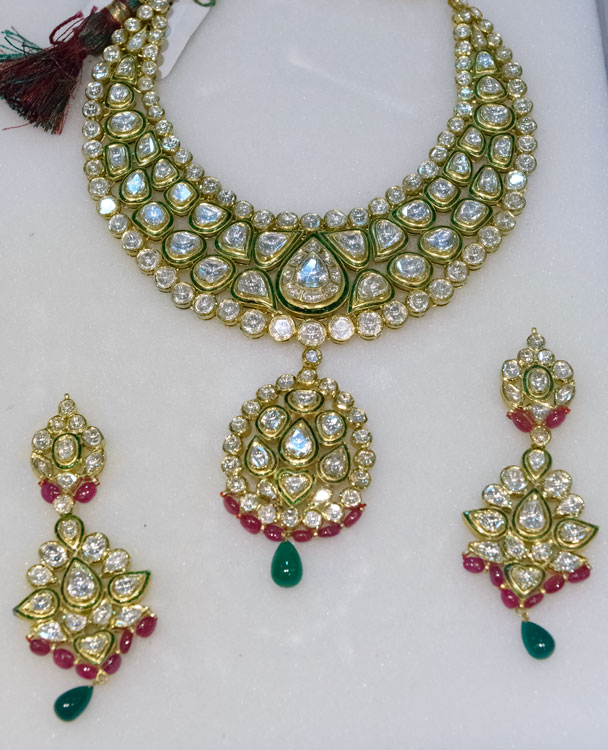 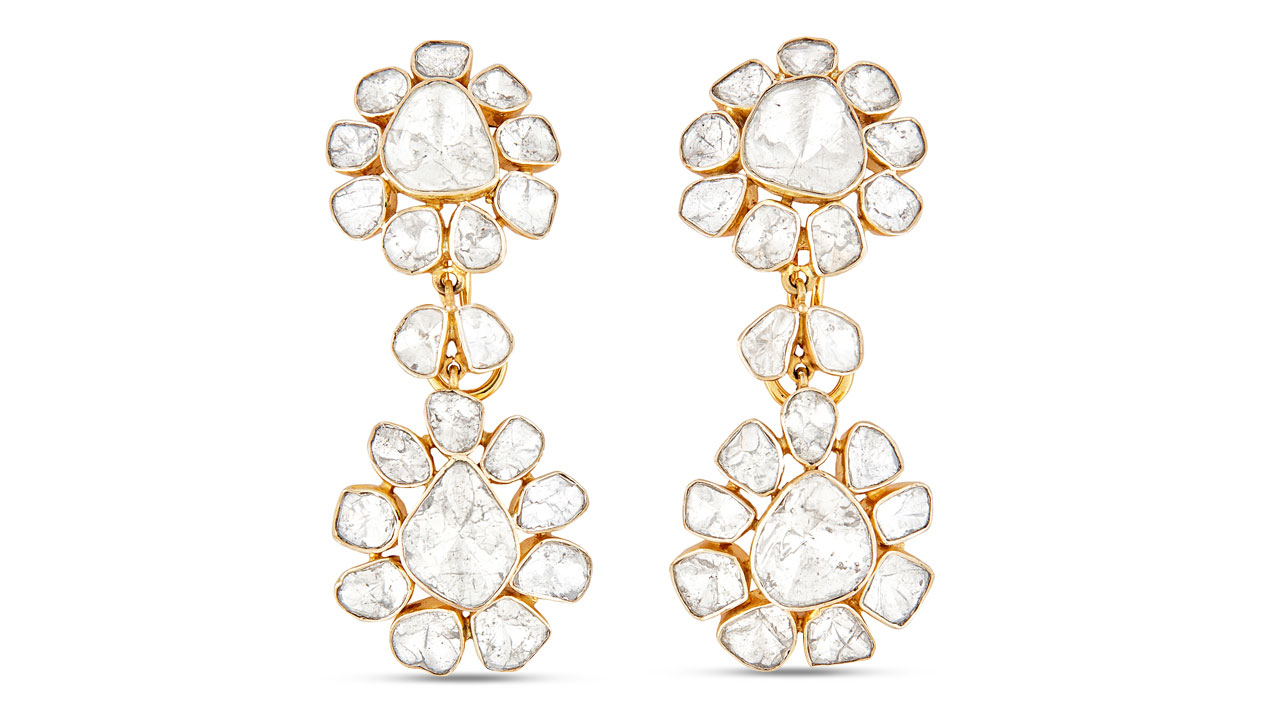 “Mogul cuts are without any particular facet arrangement and have an irregular and asymmetrical form as the cutter was striving for the maximum size possible, but without what they deemed to be flaws,” he said. “Early European styles wanted to follow the design of an octahedron crystal and then slowly moved towards reflecting light back to the viewer as early as the 15th century. This lead to having a large top facet (the table) and various arrangements of facets on the pavilion designed to reflect light back to the observer.”

By the early 19th century, European cutting techniques were adopted by Indian cutters. They remained loyal to cutting diamonds that stayed close to their natural forms, however, because after at least a thousand years, these traditional cutting techniques had become ingrained into the style of Indian jewels. Today, polki is the name applied to a variety of traditional Indian cuts.

“Polki diamonds are still used in most wedding jewels which are still very traditional,” said Siddhartha Sacheti, of Jaipur Gems, a Mumbai-based retailer. “Usually they are backed with silver foil and enameled at the back in the manner of most traditional Indian jewelry.”

Sacheti also explained that while the look remains similar to diamonds cut in centuries past, manufacturing polki diamonds is as up to date as their round brilliant counterparts. “They are all laser-sawn into slices and then polished or lightly faceted by machine,” said Sacheti.

Because they are usually much less expensive than round brilliants or modern fancies, diamond manufacturers use highly included or cloudy rough that still has good color. “The included stones would have a very low yield if they were made into modern cuts,” Sacheti said. 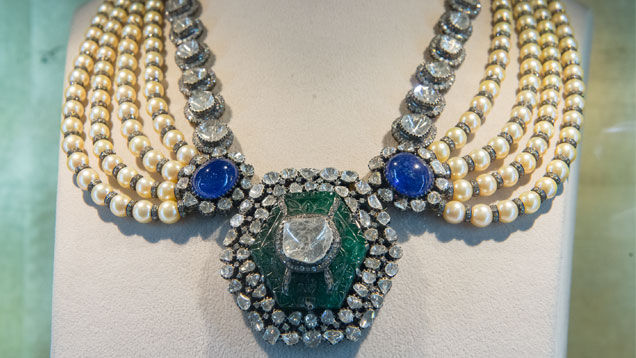 The lower per-carat prices don’t always translate into lower prices at the shop, said Agarwal, who markets her jewels though her own site, boutiques in London and Mumbai, and luxury websites.

“They can be challenging to work with. First, I often have to wait until I find enough stones that will compliment one another in color and shape,” she said. “Second, there are no pre-manufactured settings. Everything has to be done by hand and it is not easy to find people skilled in that kind of work.”

Contemporary polki diamond jewelry is trending back to its roots. Sacheti has begun to make contemporary-looking polki jewels because millennial buyers in India are “looking both East and West.”

Jewelers to the Maharajas of Jaipur and Modern-Day Moguls

See the fantastic works of art made today in the form of enameled Kundan meena jewelry and the regal look of polki diamonds.

Examines a collection of Indian and Indian-inspired jewelry on display at New York's Metropolitan Museum of Art.

Books: Treasures from India: Jewels from the Al-Thani Collection

Review of Treasures from India: Jewels from the Al-Thani Collection by Navina Najat Haidar and Courtney Ann Stewart.

Jaipur, India, is a leading emerald cutting and trading center for the global gem and jewelry industry. See inside the industry with a GIA field team, and learn the intricacies of a business seldom seen by the public or most members of the industry.