Jewels of Hollywood: Accessories and Jewelry that Made the Stars Shine

Our fascination with celebrities – and their glittering jewels, accoutrements and couture clothing – has fed our imaginations since the early days of motion pictures. They represent who we think we could be in our wildest dreams.

Hollywood – and the jewels stars wear – have gone hand-in-hand for many years to attract the attention and imagination of movie-going audiences. The Golden Age of Hollywood, roughly from the end of silent movies through the 1950s and 60s, was flush with funds and a studio system that produced glittering and glamorous stars and moneymaking films. 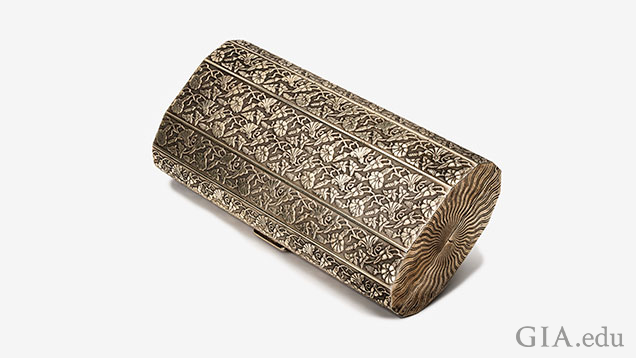 Once a potential leading lady was found, a team set about to transform her into a star, according to “Hollywood Jewels: Movies, Jewelry, Stars,” written by Penny Prodow, Debra Healy and Marion Fasel. This included developing her look, her home and her social life.

“With so much money tied up in a star, decking her out in precious jewelry was considered not an extravagance but part of the investment,” according to the book.

“Jewels of Hollywood,” on loan from the Kazanjian Foundation, showcases some of the pieces associated with Hollywood royalty of decades past. It is a window into the lives and loves of some of the entertainment industry’s most iconic members. 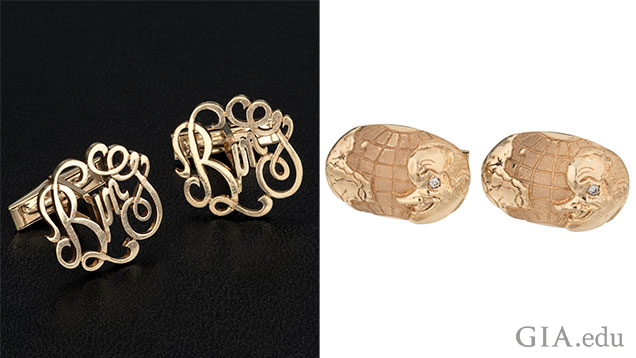 There are several sets of cufflinks on display, including signer/actor Bing Crosby’s, left, and comedian/actor Bob Hope’s. Crosby’s gold cufflinks are lyrically scrolled with his first name. Hope’s 14K yellow gold cufflinks are engraved "TO ROBERT" on one cufflink and "XMAS 1972 BOB HOPE" on the second. Courtesy of the Kazanjian Foundation’s Hollywood Collection. Crosby photo by Orasa Weldon/GIA. Hope photo by Emily Lane/GIA

Arranged by topic, the exhibit cases include jewelry, cufflinks and other accessories, such as watches, compacts, cigarette cases, money clips and mesh handbags. The stars and movie moguls represented include:

What is striking about many of the pieces in this collection is that they were actually picked out and owned by the stars, not selected by stylists, as is common today, says Terri Ottaway, curator of collections for the GIA Museum in Carlsbad, California.

“Jewelry is one of the most sentimental objects we can buy for ourselves or as gifts for others – and movie stars love sentimental gifts just like the rest of us,” she says. “A lot of these pieces have inscriptions that are really endearing.” 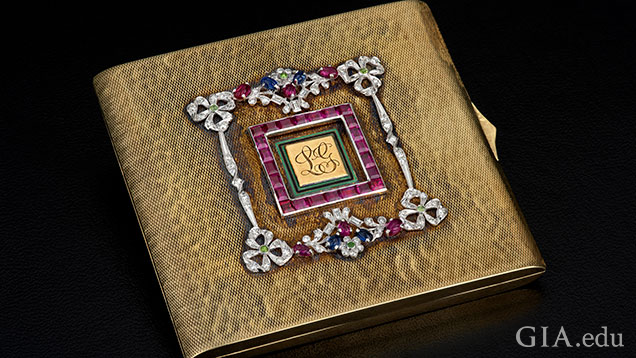 Carole Lombard, for example, gave a beautiful gold cigarette case to her husband Clark Gable with the engraving: “Darling” with love from “Ma,” dated “Xmas 41,” referencing the pet names “Ma” and “Pa” Lombard and Gable called each other.

Also included in the exhibit are some of the compacts and cases stars used to carry makeup and other items. 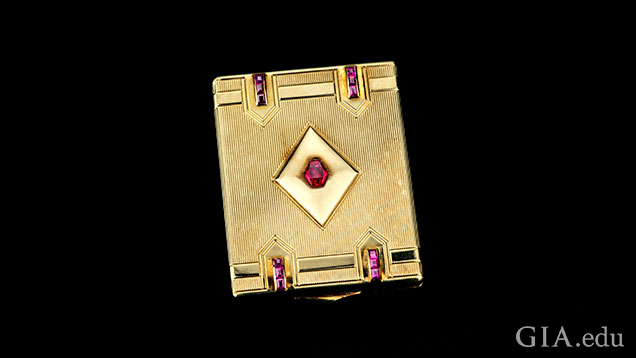 “When the stars used to travel, there wasn’t a traveling jewelry box type of item to keep their baubles and personal items secure, so it wasn’t uncommon to see a grand dame using an old cigar box, or coffee can, or tobacco tin, or something along those lines to hold her jewels and makeup,” says Doug Hall, an instructor at GIA.

Soon, iconic jewelry houses, such as Van Cleef & Arpels, responded by creating elegant compacts to hold these items, he says. The cases could be personalized and embellished with gemstones and motifs. 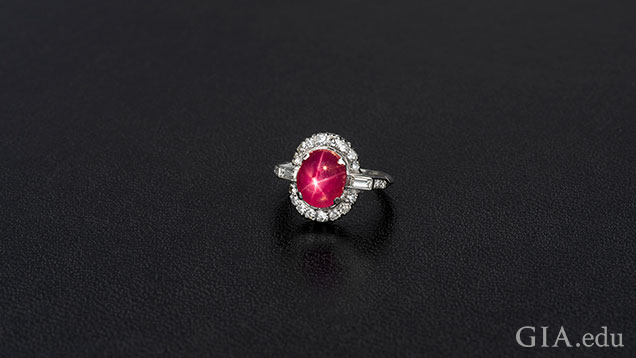 Actress Martha Scott wore this star ruby and diamond ring set in platinum at the premiere of her movie “Hi Diddle Diddle” in 1943. Scott also appeared in such blockbusters as “The Ten Commandments” and “Ben Hur” and received an Academy Award nomination for “Our Town.” Courtesy of the Kazanjian Foundation’s Hollywood Collection. Photo by Orasa Weldon/GIA

Fans of The Golden Age of Hollywood will enjoy seeing “Jewels of Hollywood” as they tour GIA, says Ottaway.

“It’s an extra-special treat for older visitors and fans of old movies,” she says. “There is something wonderful about being able to make a personal connection with the iconic stars you remember seeing on the big screen.”

View the Jewels of Hollywood exhibit in person at GIA's World Headquarters in Carlsbad during GIA's Career Fair and Open House on Friday, October 11, 2019.

Take a Virtual Tour of “More is More”

Erica Courtney has been adorning Hollywood stars for the red carpet for decades. Her eye for color and bringing out a stone’s beauty are immediately apparent.

This exhibit, on loan from the Kazanjian Foundation, showcases some of the jewels associated with Hollywood royalty of decades past. It is a window into the lives and loves of some of the entertainment industry’s most iconic members.

Visitors to the GIA World Headquarters in Carlsbad, California can experience a vast and vibrant world of gems and jewelry. Exhibits showcase the science and beauty of gems and minerals, along with expertly designed and crafted jewelry.
Learn More