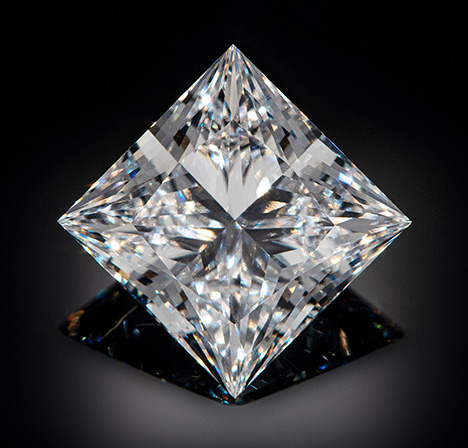 Figure 1. The new record size for CVD laboratory-grown diamond—16.41 ct, with G color and VVS2 clarity—has been achieved by Shanghai Zhengshi Technology Co. Ltd. This is an as-grown diamond; no post-growth treatment was applied for color improvement, either before or after faceting. Photo by Towfiq Ahmed.

Growth technology of single-crystal diamond has advanced significantly in the last two decades, for both the high-pressure, high-temperature (HPHT) and chemical vapor deposition (CVD) methods. In addition to many other applications, laboratory-grown diamonds have become an expanding segment of the jewelry industry. Records for crystal size and quality are frequently broken. In this note, GIA’s New York laboratory reports on a new record for CVD laboratory-grown diamond.

This princess-cut diamond produced by Shanghai Zhengshi Technology Co. Ltd. (figure 1; GIA report number 2225246686) weighed 16.41 ct and measured 13.97 × 13.87 × 9.56 mm, with G color and VVS2 clarity. The strong graining distributed throughout it created a “wavy” appearance (view the video clip below). In addition, a few tiny pinpoints were present. Absorption spectroscopy in the infrared region revealed this was a typical type IIa diamond. Except for absorptions from the diamond itself, no other defect-related absorption was detected in this region. Photoluminescence spectroscopy collected at liquid nitrogen temperature with 514 nm laser excitation (figure 2, left) showed emissions from NV centers with zero-phonon lines (ZPL) at 575.0 nm and 637.0 nm with moderate intensities. Clear emissions from SiV– at 736.6 and 736.9 nm were detected. Weak emissions at 596 and 597 nm, which are specific to CVD diamond and also unstable at high temperature, were recorded overlapping with side bands of the NV0. Photoluminescence spectroscopy with 457 nm laser excitation (figure 2, right) detected weak emissions at 503.5 nm (3H) and 467.6 nm. Similar to the emission at 596 and 597 nm, the 467.6 nm center is CVD-specific and would be annealed out at very high temperature. No emission from the H3 defect was observed. All these spectroscopic features confirmed this was a CVD diamond with no post-growth treatment to improve the color.

Images collected under deep short-wave UV excitation showed strong orange-red fluorescence with banded blue regions (figure 3). The blue “columns” were nearly perpendicular to the table and extended almost continuously to the pavilion and culet. This feature was consistent with both the strong lattice dislocations observed under the microscope with crossed polarizers (figure 4) and its observable graining. Up to seven growth steps were revealed in the fluorescence and cathodoluminescence images (figure 5), with each layer of similar thickness. This princess-cut diamond had been faceted with its table face parallel to these layers for maximum weight retention, while keeping excellent proportions and symmetry. 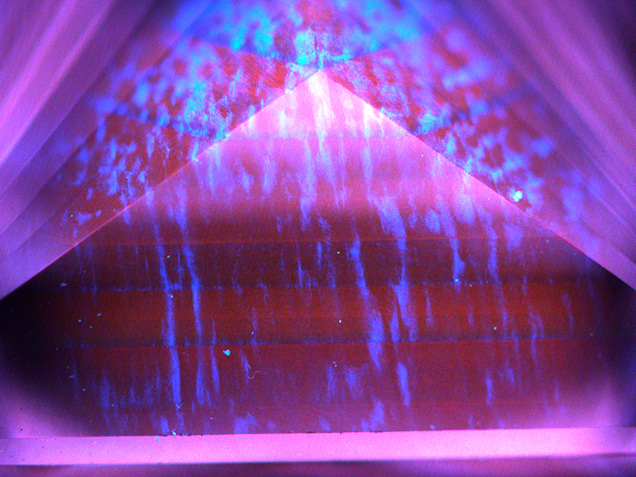 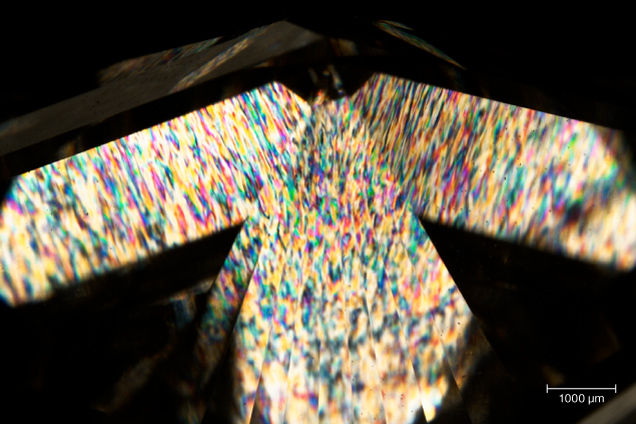 Figure 4. The large CVD diamond showed very strong dislocations under crossed polarizers, the main cause of its wavy appearance. Photo by Stephanie Persaud. 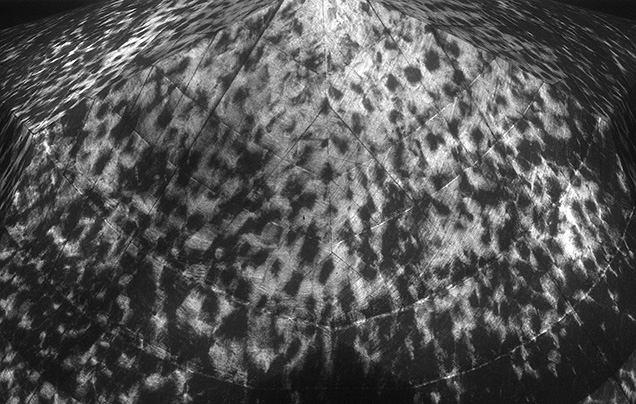 Figure 5. Cathodoluminescence imaging also revealed the seven growth steps. The dark dots in this image are related to the lattice dislocations. Image by Elina Myagkaya.

For CVD growth, this 16.41 ct diamond broke the record previously held by a 14.60 ct diamond (emerald cut, F color, VS2 clarity) produced in India, which surpassed the previous record of 12.75 ct (round brilliant, F color, VVS2 clarity), both reported last year (“IGI certifies world record 14.60 ct lab grown diamond,” IGI GemBlog, August 31, 2021). In comparison, the largest colorless or near-colorless HPHT laboratory-grown diamond is 15.32 ct (cushion cut, H color, I1 clarity), tested by GIA in 2018. The largest laboratory-grown diamond of any kind tested by GIA so far is a fancy-color 20.23 ct cushion cut (Fancy Vivid yellowish orange, VS2) produced using the HPHT method in 2019. GIA will continue to follow the development of laboratory-grown diamonds to ensure that all are properly identified.

Wuyi Wang is director of research and development, and Stephanie Persuad and Elina Myagkaya are research associates, at GIA in New York.

Since the introduction of its new digital Laboratory-Grown Diamond service, GIA has recently seen a vast increase in the number of diamonds grown by chemical vapor deposition.