One year after Chow Tai Fook Jewellery Group and GIA announced a pilot program to give customers who purchase the Chow Tai Fook’s T MARK diamonds blockchain-secured, digital diamond grading reports, the company announced that it will expand the program to additional stores in Hong Kong and mainland China.

“Launching our T MARK diamond brand represented a significant breakthrough as we were the first retailer to share the life journey of a diamond,” said Kent Wong, managing director of Chow Tai Fook Jewellery Group, a Hong Kong-based jewelry retailer that has more than 3,000 outlets globally.

According to Wong, the addition of GIA’s secure digital reports makes the T MARK program truly complete because it documents the diamond journey and grading information in one place.

The pilot program was launched in September 2018 and reached 10 Chow Tai Fook stores in Hong Kong by March 2019. Customers who buy T MARK diamonds can choose to receive a digital GIA grading report through the dedicated T MARK app on their phones instead of the usual printed document. All of the GIA grading report data is secured through blockchain technology using the IBM Blockchain Platform.

“It made perfect sense to add GIA’s secure digital blockchain reports into our T MARK program to add another layer of trust for our customers,” said Chow Tai Fook executive director Bobby Liu.

Chow Tai Fook executives say the blockchain initiative has gone down well with its customers, particularly the younger generation, who are excited about blockchain technology because it aligns with their pursuit of authenticity, higher security and a paperless lifestyle. The company also said customers liked the idea of storing the digital GIA reports in the T MARK app because the diamond grading information is just a few taps away and can be retrieved anytime. 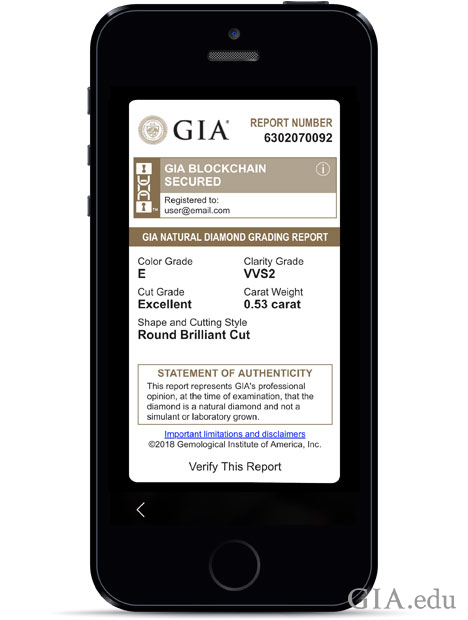 Of course, there is also a great deal of curiosity about the T MARK app because many customers are not familiar with the concept of blockchain. According to Chow Tai Fook, a well-prepared sales staff is the key to making the T MARK program work. Their sales staff are well-trained to explain the benefits of this technology:

Chow Tai Fook sales staff stress to customers that blockchain technology is already used to protect high-value assets such as in fine wines, works of art and other luxury products, and critical data in other industries. Chow Tai Fook and GIA are the first to offer this technology to diamond purchasers. Chow Tai Fook also notes that once a record is added to the blockchain database, it is permanent and cannot be changed, ensuring the security of the data.

Most importantly, though, the retailer tells all of its customers that blockchain technology is simply a tool that helps to enhance what they have already come to expect from Chow Tai Fook and GIA.

Education is Key to Explaining the Benefits of Digital Diamond Information

Chow Tai Fook acknowledges that not every T MARK customer is ready to go without the printed reports. There is a period of transition, and as with any new product or service, its executives said, education is a key factor during this time.

Indeed, just as when companies like Apple or Nike introduced digital receipts and warranties, there were some customers who were early adopters and some who preferred paper. In the initial stages of the project, the company plans to give customers both options.

The company will make a continuous effort to adopt digital reports as the norm, especially after it expands the offering to Chinese consumers in mainland China in the coming months.

As Chow Tai Fook expands beyond its pilot blockchain program, it believes there is ample room for growth, especially as it adds more stores, trains more front-line staff and works with GIA to closely monitor the program.