Gemfields, the publicly listed gemstone mining company, is undertaking a major expansion of the Montepuez ruby mine that it commissioned two years ago in Mozambique.

Gemfields reports that since coming online in mid-2012, the mine has produced eight million carats of corundum: 60% light or pink colored corundum; 20 to 25% lower quality ruby; 10-12% medium quality ruby; and approximately 8% fine material. It has been mining much faster than its gravel washing and sorting operations could handle, so it plans to double its washing plant throughput from 120 to 250 metric tons per year.

The company has become a major supplier of corundum to a market starved for fine qualities of the red gemstone since the 2008 passage of the JADE Act, a U.S. ban on the importation of ruby and jadeite jade from Myanmar (Burma), which remains in force. 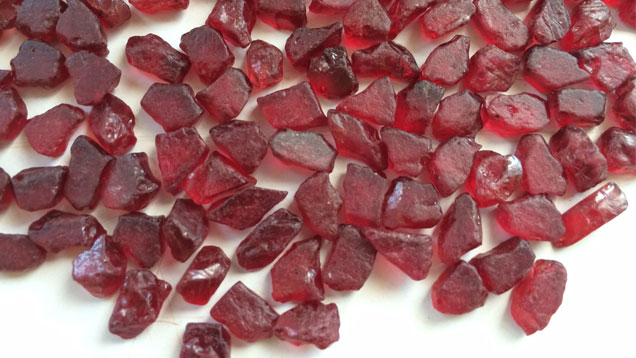 A group of top grade Montepuez rubies at the company sorting house are very homogenous in color and size, weighing between 2 and 2.5 carats. Photo by Russell Shor/GIA
Gemfields also plans to increase mining operations at a deposit called Mugloto, which is a secondary source several kilometers from the main mining site. Mugloto, while not nearly as rich as the main area, called Maninge Nice, is the source of much of the higher quality material.

The production of medium and better quality ruby at Mugloto is remarkably homogenous, with many crystals having very similar color, shape and size. The grade is about two to three carats per metric ton of ore against the Maninge deposit, which produces 162 carats of all grades of corundum per metric ton, according to the company.

Gemfields held the first auction of its production in June and is planning a second sale later this year. 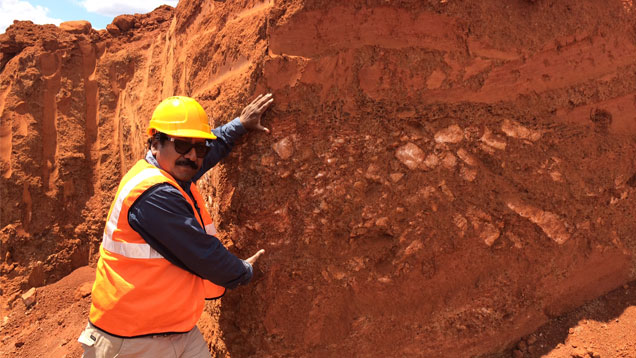 Montepuez chief geologist Ashim Roy points out the ruby-bearing sedimentary rock belt at the Mugloto deposit in northern Mozambique. Photo by Russell Shor/GIA
DIAMONDS: The diamond industry is closely watching the Hong Kong Watch and Jewellery Show for signs that demand will pick up during the final quarter of the year.

De Beers held the line on rough prices at the Aug 18-22 sight, which totaled $735 million. Liquidity issues remained at the forefront, however, as polished prices remained soft in the wake of lackluster demand worldwide. In addition, polished inventories have been climbing, forcing manufacturers to pay carrying charges on goods for which there is no ready market.

In general, prices remained stable in the August sight, though there were apparently some minor declines for commercial quality and high clarity stones polishing out to a carat or larger. Still, some sightholders rejected allotments they considered too expensive for the market, despite the fact that De Beers’ executives will be taking such rejections into account when selecting clients for the new sight term that begins in January. Rough dealers found little profit in sight boxes, selling most goods at cost.

Alrosa, which had been very restrained in its sales, announced it had raised prices 7% during the course of the year and would be selling larger quantities of rough in September. De Beers does not schedule a sight in September. The company also announced it would be reviewing its client list starting next year, using similar criteria as De Beers, including clients’ purchase record during the 2008-9 crisis and 2012 correction. The company will continue to sell the vast majority of its production at set prices through its sight system, instead of moving toward tender/auction sales.

Russia’s newest producer LUKoil, the majority owner of the Grib deposit in the western part of the country (near the border with Finland) has hired several executives from BHP’s former diamond operations and will market its production exclusively by auction sales.

The outlook for diamond manufacturing remains unclear as the summer ends. Retail sales have remained relatively static, albeit at a decent level. But price caution at the wholesale and retail levels keeps profits extremely low, and banks have continued their tight credit policies. In addition, there is evidence that polished inventories are much higher than the market can absorb for most sizes and qualities.

CONSUMER CONFIDENCE: One bright spot is that the Conference Board survey of consumer confidence in the U.S. has reached its highest point since October 2007, well before the economic crisis hit in earnest.
About the Authors

Russell Shor is senior industry analyst and Robert Weldon is manager of photography and visual communications at GIA in Carlsbad, California.

Assessment of authenticity and quality for diamonds in the D-to-Z color range from GIA, creator of the 4Cs