Standard gemological testing revealed a single refractive index of 1.50 and a hydrostatic specific gravity of 2.43. Both stones fluoresced weak green to long-wave UV light and weak to medium green to short-wave UV light. Although the six-sided, trigonal prisms had well-formed “crystal-like” shapes resembling tourmaline, the refractive index ruled out that material.

Microscopic examination with fiber-optic lighting showed trapped gas bubbles, flow structure, and a distinct boundary where two types of glasses, with and without metallic inclusions, were fused together. Areas of encapsulated glass exhibited a light yellow bodycolor and contained geometric metallic crystals and gas bubbles (figure 2). Due to the mixture of the fused glasses, it was obvious that the prisms were manmade. 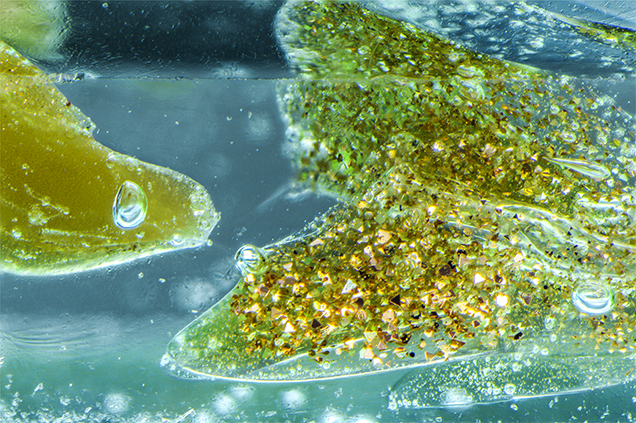 Infrared spectroscopy confirmed our identification of manmade glass. The FTIR spectrum for manmade glass is very different than that of tourmaline (see figure 3). Further testing with EDXRF showed the presence of Cu, consistent with the copper color of the minute metallic crystal inclusions.

The rough “crystal-like” shape and fusion of two glass types, one with metallic inclusions and one without, present a more complicated type of manmade glass product. This sort of glass imitation using copper platelets to simulate a natural stone has been documented (see E.J. Gübelin and J.I. Koivula, Photoatlas of Inclusions in Gemstones, Vol. 1, 2005, Opinio Publishers, Basel, Switzerland, p. 433). The polish lines seen on the surfaces of both glasses clearly indicate that these were faceted to resemble a natural rough stone, and the trigonal outline and elongate shape suggest the goal was to imitate tourmaline, which has a similar appearance. The copper inclusions and neon bluish green color would further indicate that the manufacturer intended to imitate Paraíba-type tourmaline.

During this same time these glass imitations were examined, a natural copper-bearing tourmaline (figure 4) from Brazil was also submitted for a colored stone identification and origin service. This stone was notable because it had rare natural dendritic copper inclusions (figure 5) that the submitted glass imitation attempted to mimic. 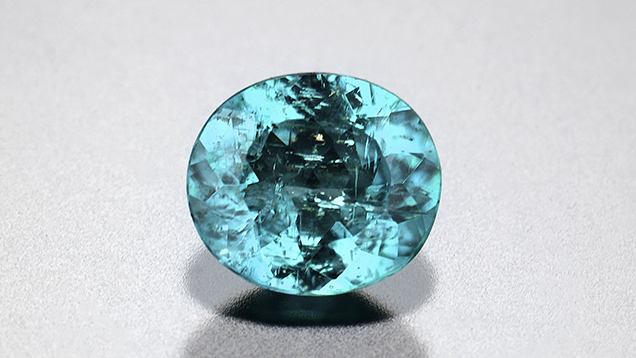 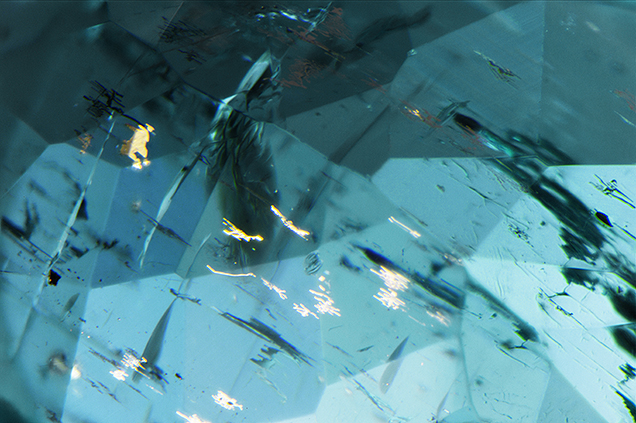 It is unusual to see manmade glass cut to imitate a natural rough crystal with eye-visible inclusions. Paraíba tourmaline is one of the most expensive varieties of tourmaline and well sought after since its discovery in the 1980s. These pieces of manmade glass were certainly interesting from a gemological perspective to demonstrate the variety of creative ways imitation gems are produced.

Gem silica, also known as “chrysocolla chalcedony,” is considered the most valuable variety of chalcedony.

Artificial glass, a low-cost material, is capable of simulating any gemstone owing to its range of appearances (bodycolor, transparency, and phenomena).

Assemblages of various materials have long been used as imitations of precious stones, with records dating back to Pliny the Elder’s Natural History (79 AD).