Figure 1. Structures and principles of operation for an II (left) and an FPD (right). Modified after Ide et al. (2015).

Over the past ten years, gemological laboratories have been replacing film-based microradiography with real-time X-ray microradiography (RTX). This paper compares the output quality and resolution provided by two RTX units fitted with different detectors: an image intensifier (II) and a flat panel detector (FPD) using the same type of X-ray generating tube. Although the II is faster and less expensive, the images acquired with the FPD show greater detail of the pearl’s internal growth structures, making interpretation and consequent conclusions easier to validate.

With film-based microradiography, pearls are sometimes placed in direct contact with a high-resolution film cassette or immersed in a scatter-reducing liquid (e.g., lead nitrate solution or carbon tetrachloride, both of which are hazardous). X-ray scattering may also be reduced by simply surrounding individual pearls with a thin lead sheet or film. R

egardless of the technique, a darkroom and a series of chemicals are necessary for film processing. It takes approximately 20 minutes to select the film and secure the pearls to the film cassette. At the same time, the exposure must be determined assuming an average-sized sample and keeping in mind that pearls in a strand are often graduated in size and that spheres require longer exposure times through the centers than the edges. Next, the film must be developed, fixed, and dried. All told, it is a time-consuming process.

The last 20 years have seen RTX steadily replace film-based radiography in the medical sector, and over the last decade most gemological laboratories have followed this trend by partially or fully adopting RTX. This method has several important advantages. No hazardous liquids are needed, and it gives immediate or nearly immediate results, which are easier to store and share among a team of technicians or in publications and presentations. RTX microradiography also requires a lower total amount of radiation than film-based microradiography, though similar X-ray generating tubes may be used without a need to reduce X-ray scattering. Some gemological laboratories initially employed RTX units with image intensifier (II) technology generally associated with digital cameras to acquire RTX microradiographs. More recent units have employed flat panel detectors (FPD), which can be of larger dimension with high resolution. However, FPD costs approximately US$25,000, about 40% more than II units and cameras.

An II is a vacuum tube device that converts invisible X-rays transmitted through the sample into visible light by a cesium iodide (CsI) scintillator. The visible light is then converted into electrons at the photoelectric surface and emitted inside the vacuum tube. The emitted electrons are accelerated and focused by electrodes, which act as an electron lens, onto the output screen and converted into bright visible light that is captured by a digital camera (figure 1, left; Ide et al., 2015). On the other hand, an FPD is a thin, flat solid sensor where invisible X-rays transmitted through the sample are converted into visible light, also by a CsI scintillator. The visible light is converted into an electric charge stored in each photo­diode (PD). The signals are read by a thin-film transistor (TFT) switch provided for each pixel and amplified by a low-noise amplifier, undergoing analog-digital conversion to become digital video signals (figure 1, right; Ide et al., 2015). 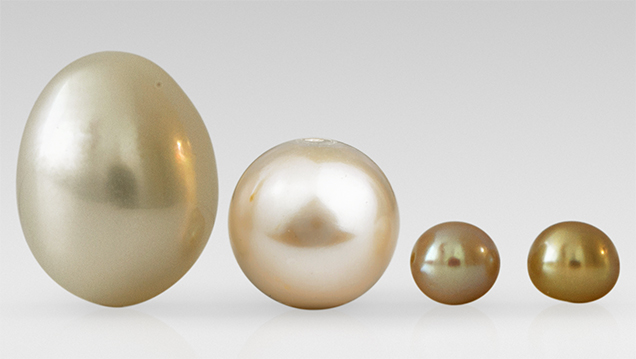 Figure 2. The four samples from this study. Left to right: three cultured pearls (sample numbers 19, 21, and 8) and a natural pearl (sample number 1). The largest sample is 15.65 mm tall. Photo by Ghadeer Abdali, © DANAT.

The quality of the RTX microradiographs depends on the system’s resolution (usually given in line pairs per millimeter, or LP/mm), the magnification, and the exported image size. The images are processed and initially viewed with software linked to the instrument or, more commonly, third-party software such as Fiji (ImageJ) or Adobe Photoshop. To view the microradiographs, a relatively large high-resolution screen (>20 inch) should be used. For this study, RTX microradiographs were acquired for the same set of samples (figure 2 and table 1) using the two different systems described above.

Microradiographs were acquired at the Bahrain Institute for Pearls and Gemstones (DANAT) using two RTX units: a FocalSpot (San Diego, California) Verifier HR FSX-090 and a Pacific X-Ray Imaging (PXI, San Diego, California) GenX-90. The electronics and imaging systems of both units were provided by PXI. Microradiographic images were collected in the same direction for each sample. Both instruments have the same tube type, a Thermo Scientific PXS5-928 with a spot size of <9 microns. The FocalSpot unit has a Toshiba E5877J-P1 image intensifier (two-inch and four-inch options) with >40 LP/mm resolution at high magnification and a camera with 0.5 MB resolution. Due to the instrument’s size and the X-ray tube collimator to minimize distortion, the maximum sensitive area is 33 × 33 mm2 (with some areas at the corners not active, as an II initial field of view is round). The PXI unit has a Perkin Elmer Dexela 1512 flat panel detector with >40 LP/mm resolution at high magnification, a pixel size of 75 microns, 3072 × 1944 resolution, and a sensitive area of 33 × 33 mm2, reduced from 49 × 56 mm2 due to the X-ray tube filter. The maximum frame averaging used to decrease noise was 256 frames for the II and 128 frames for the FPD. X-radiation of 70–90 kV accelerating voltage and 70–90 µA current were used in both instruments with an exposure time of 100–250 milliseconds per frame. The acquisition times for each microradiographic image were approximately 10 seconds for the II and 100 seconds for the FPD. The images were exported as TIF files, with a maximum resolution of 300 KB/8-bit grayscale and 6 MB/16-bit grayscale, respectively. For each sample, microradiographs were taken from three directions perpendicular to each other. The images were manipulated with Fiji (ImageJ) version 1.0 using Java 6, an open-source software.

Selected radiographs of all four samples are shown in figures 3–6. Microradiographs acquired with the FPD are provided on the left, while images collected using the II system are on the right. All images are grayscale; lighter tones indicate materials with higher density such as calcium carbonate (usually aragonite for most gem-quality pearls, as in this study), while darker tones represent lower-density materials (usually organic matter, cracks, or cavities/voids). To view the raw original images, see supplementary items S3–S6. Figure 3 presents the microradiographs of a bead-cultured saltwater pearl from Pinctada fucata. The implanted bead, which presents no structure and is almost centered, is clearly indicated by a dark growth line running inside the edge of the sample and roughly parallel with this edge in both microradiographs. This line, made up mostly of organic material, separates the bead from the nacre overgrowth (Scarratt et al., 2000). The microradiographs acquired with an II appear less clear than those produced with the FPD, which allow the growth line surrounding the bead to be clearly viewed. This feature appears less clear in the II along several parts of the growth line.

Figure 3. Microradiographs of sample 8, a bead-cultured saltwater pearl from Pinctada fucata, produced with an FPD (left) and an II (right). The diameter of the bead is about 4.5 mm.

Figure 4. Microradiographs of the center of sample 19 (a non-bead-cultured saltwater pearl from Pinctada maxima), produced with an FPD (left) and an II (right); fields of view approximately 7 mm.

Figure 4 presents the magnified microradiographs of the central part of a non-bead-cultured saltwater pearl from Pinctada maxima. A large irregular dark gray area that allows this sample to be identified is clearly observed in both microradiographs (Krzemnicki et al., 2010). However, the microradiograph acquired with an FPD reveals additional information in the form of light lines within the dark gray center and growth lines around it.

Figure 5. Microradio­graphs of sample 1 (a natural saltwater pearl from Pinctada radiata), produced with an FPD (left) and an II (right); fields of view approximately 3.5 mm.

Figure 5 presents magnified microradiographs of the central part of a natural saltwater pearl from Pinctada radiata. Both images reveal an “onion-like” structure with a darker color and a dark spot in the center, a characteristic of natural pearls (Scarratt et al., 2000; Karampelas et al., 2010; Krzemnicki et al., 2010). Additionally, some dark areas and lines are observed toward the outer part of the sample. In the microradiograph acquired with the II, the dark center and the various growth lines are barely visible. It is very noisy, and thus further information cannot be revealed. In the microradiograph produced with an FPD, several additional lines are observed as well as some radial structures in the darker part of the sample. These structures, which likely result from the radial calcite, appear darker due to the enrichment of organic matter that is observed in the center of some natural pearls (Krzemnicki et al., 2010).

Figure 6. Microradiographs of sample 21 (a non-bead-cultured freshwater pearl from Hyriopsis species), produced with an FPD (left) and an II (right); fields of view approximately 9 mm.

RTX microradiography is widely used today by gemological laboratories to separate natural and cultured pearls. Both II and FPD detectors are used for this purpose. An II detector produces faster results than an FPD, and at present the overall cost of an II-based unit is less. On the other hand, FPD images are less noisy and provide greater detail of the internal structures in both natural and cultured pearls, making them more suitable for pearl identification. However, an II could be appropriate for other industries, where the balance between cost and performance is important or when quick response is essential.

Dr. Karampelas is research director, Ms. Al-Alawi is executive director, and Mr. Al-Attawi is pearl testing manager at the Bahrain Institute of Pearls and Gemstones (DANAT), based in Manama.

The authors thank the gemological team of DANAT for their help with the microradiographs and macro image acquisition. John Donaldson from Pacific X-Ray (PXI) is thanked for the numerous fruitful discussions regarding the specifications sheets of each instrument.

The distinction of natural from cultured pearls traditionally has been based on X-radiography.

There has been considerable debate in the gem trade concerning the nucleation procedures being used to grow large round Chinese freshwater cultured pearls (FWCPs).