Nephrite’s internal structure typically appears fibrous, with an intricately woven microstructure of thin tremolite filaments and microtubules that form kidney-like shapes. The name “nephrite” thus derives from the Greek word for kidney (Łoboś et al., 2008). It is characterized by a high degree of compactness and coherence as well as extreme compressive strength. One nephrite from British Columbia, Canada, exhibited a fracture strength of about 200 MN m–2 (Makepeace and Simandl, 2001). By contrast, nephrite has a hardness of approximately 6.5 on the Mohs scale. The specific gravity of nephrite usually ranges between 2.90 and 3.06 (Żaba, 2006). The main global economic deposits of nephrite jade occur in Canada, Russia, China, the United States, South Korea, New Zealand, Australia, Poland, Italy, and Switzerland. These are usually classified as:

This study measured the radioactivity concentration of 40K, 232Th, and 238U in ortho-nephrite samples from five known nephrite deposits using gamma-ray spectrometry. A major goal of this research was to ascertain whether, as valued decorative stones and gemstones, nephrite may pose a radiological risk to those who handle them, such as artisans or collectors. The authors also sought to compare Th/U ratios of ortho- and para-nephrite. As a secondary goal, the research sought evidence that Th/U concentration ratios vary with the geographic origin of nephrite. The results were compared with limited data available from previous studies on samples from the same localities. Previously published data consist primarily of potassium concentrations but also include thorium and uranium concentrations reported for para-nephrite and obtained by other analytical methods (Leaming, 1978; Łoboś et al., 2008; Grapes and Yun, 2010; Burtseva et al., 2015; Gil et al., 2015).

Dolomite-related nephrite forms at the contact between dolomite marble and a granitic intrusion or siliceous metasediments (Nichol, 2000; Yui and Kwon, 2002; Gil et al., 2015). Different formation processes cause ortho-nephrite and para-nephrite to vary in terms of their concentrations of transition metals and trace elements. Due primarily to lower iron and chromium concentrations, para-nephrite displays lighter colors ranging from white to light green (Luo et al., 2015). Ratios of iron to magnesium and concentrations of chromium, nickel, cobalt, and manganese distinguish para-nephrite from ortho-nephrite. Along with trace element concentrations, hydrogen and oxygen stable isotopic ratios have been used to determine the geographic origin of select dolomite-related nephrite deposits (Gao et al., 2020). As many concentrations of minor elements overlap for both types of nephrite, expanding the range of trace element determinations and overall geochemical datasets could refine models and criteria for distinguishing dolomite-related and serpentinite-related nephrite. Expanded geochemical datasets also offer greater accuracy and precision to studies of nephrite provenance.

Consensus holds that ortho-nephrite forms due to initial rodingitization and subsequent serpentinite transformation under the influence of gabbroic or acid magma injection (Gil et al., 2015). Genetic relations between these phases and associated rock types thus warranted investigation of both serpentinite and rodingite that co-occur at the Nasławice locality.

Raw jade samples referred to as JR1, JR2, and JR3 (table 1 and figure 1, D–F) belong to the collection of M. Sachanbiński and come from the historic jade quarry in Jordanów (Prichystal, 2013). Nephrite in Nasławice and nearby Jordanów occurs in serpentinite of the Gogołów-Jordanów Massif (GJM), which forms part of the Ślęża Ophiolite, itself part of the Mid-Sudetic Ophiolite (Gil, 2013; Gil et al., 2020). These nephrites occur as irregular bodies within the so-called black wall, a chlorite body within a contact zone of rodingite dikes and serpentinite. The serpentinites in Jordanów and Nasławice host completely transformed gabbro and plagiogranites as well as partially rodingitized leucogranites. Nephrite from Jordanów and Nasławice is considered of high gemological quality and usually appears green but without uniform coloration. Varied shades of green create unique patterns on the material’s surface. Actinolite represents the main mineral comprising nephrite, and secondary minerals include chlorite, antigorite, grossular, chromite, and iron oxides.

Russian nephrite samples SB1, SB2, and SB3 (table 1 and figure 1, G–I) belong to the collection of M. Sachanbiński. These were donated by a Russian geologist during the International Mineralogical Association conference in Novosibirsk, Russia, in September 1978. The samples come from the Ospa deposit located in the East Sayan nephrite-bearing area (southern folded periphery of the Siberian craton). This deposit represents an apo-ultrabasic nephrite (Burtseva et al., 2015). Nephrite from the deposit appears greenish blue in color and exhibits different degrees of saturation (Suturin et al., 1980). Mineral compositions consist primarily of actinolite and tremolite fibers, pyroxene, diopside, serpentine, talc, chromite, graphite, and fuchsite. Accessory mineral content ranges from 0.5 to 1.5%. All of the above-mentioned nephrite samples from Nasławice and Jordanów (Poland) and Siberia (Russia) will be donated to the Mineralogical Museum of the University of Wrocław (Poland).

Canadian sample CN1 is a dark green nephrite carved in the form of a small bear (table 1 and figure 1J). This carving also belongs to the collection of M. Sachanbiński and was purchased during the 17th General Meeting of the IMA in Toronto in August 1998. It was made by a First Nations artisan using material from British Columbia, where more than 50 nephrite occurrences have been reported. These consist of individual blocks, talus blocks, boulder fields, and in situ bodies that occur primarily at contacts between serpentinite and cherts, or other metasedimentary and igneous rocks formed in submarine environments. Secondary minerals in the nephrite include spinel, diopside, uvarovite, titanite, chlorite, and talc (Leaming, 1978; Makepeace and Simandl, 2001).

Nephrite sample NZ1 from the South Island of New Zealand exhibits a waxy luster and blackish green color (table 1, figure 1K). This sample was donated to the Mineralogical Museum at the Institute of Earth Sciences, University of Silesia by L. Sajkowski, a Polish geologist living and working in New Zealand. Grapes and Yun (2010) describe this nephrite from northern Westland as occurring as rare pebbles and boulders weighing up to several tons, found in glacial outwash gravels and till. They also appear in streams and rivers that drain the nephrite source area of the pounamu ultramafic rocks located in the northern part of the Southern Alps (Ireland et al., 1984; Cooper, 1995).

Sample SRN (table 1, figure 2D) belongs to the collection of M. Sachanbiński and represents a typical serpentinite from the deposit in Nasławice. Serpentinites occurring there formed as a result of complex, long-term transformation of harzburgite and lherzolite (Dubińska and Gunia, 1997). These belong to the Gogołów-Jordanów Serpentinite Massif of the Ślęża Ophiolite and probably formed at around 400 Ma (million years ago) (Gil et al., 2015). The serpentinite from Nasławice appears dark green in color and consists primarily of antigorite and sometimes contains olivine, bronzite, diallage, diopside, and hornblende. They sometimes resemble nephrite or are nephritized to varying degrees. Subordinate minerals include magnesite, braunite, chromite, apatite, garnet, and others. Macroscopically, these minerals are prized for their decorative value. The use of serpentinite as tools or decorative objects dates back to the Neolithic (around 3000 BCE) in Lower Silesia. The stone was originally used in tools and weapons (e.g., axes, knives, and hoes) and is used today in ornamental objects (see box A).

Correlations Between Th and U Concentrations. As seen in figure 9, 232Th and 238U concentrations correlate strongly in ortho-nephrites analyzed and give a correlation coefficient of 0.98. A fitted line shows samples NS1 and NZ1 deviate slightly from this trend. Figure 9 shows that Jordanów samples (JR1–JR3) form a distinct data cluster with uranium concentrations ranging from 1.3 to 1.7 ppm and thorium concentrations from 1.0 to 1.2 ppm. All other ortho-nephrite samples range from about 0.1 to 0.6 ppm in terms of both uranium and thorium concentrations. A gap of 0.7 to 1.3 ppm for uranium and 0.6 to 1.0 for thorium thus exists between the Jordanów samples and others. Excluding the CN1 sample, other samples also show strong K-Th and K-U correlations (table 1).

Th/U Concentration Ratios. As shown in figure 11, Th/U ratios for the serpentinite-related nephrites vary from 0.70 to 3.51 with an average value of 1.30. The average Th/U concentration ratios were 1.11 ± 0.12, 0.73 ± 0.02, and 0.95 ± 0.05 for nephrite from Nasławice, Jordanów, and Siberia, respectively. Nephrite from these locations can be differentiated within standard deviations based on their Th/U ratio (figure 11). Despite its higher thorium and uranium concentrations, sample NS3 gave a Th/U ratio similar to that of samples NS1 and NS2. Samples CN1 and NZ1 gave relatively higher Th/U ratios of 2.03 ± 0.14 and 3.51 ± 0.25, respectively.

The data presented by Luo et al. (2015) indicates a calculated mean Th/U value of 0.5 for dolomite-related nephrite. This value falls below the value of 1.3 estimated for serpentinite-related nephrite by the present study (figure 11). The calculated values of 1.3 and 0.5 for serpentinite- and dolomite-related nephrite (respectively) resemble Th/U concentration ratios in the host rocks. Serpentinites and their peridotite protoliths both exhibit a Th/U ratio of approximately 2 (Van Schmus, 1995; Pasquale et al., 2001). As listed in table 1, the serpentinite from Nasławice (SN1) gave a ratio of 1.9, which approaches the mean value estimated for ortho-nephrite. Previous studies of dolomite and dolomite marble using gamma-ray spectrometry show that the average Th/U ratio for these rocks is about 0.5 (Chiozzi et al., 2002; Malczewski et al., 2005; Malczewski and Żaba, 2012; Moska, 2019). Generally, carbonate rocks have a mean Th/U value of 0.8 (Van Schmus, 1995). Again, the average value of the Th/U ratio calculated for the para-nephrites based on the results obtained by Luo et al. (2015) agrees well with those reported for carbonate rocks and especially dolomites. 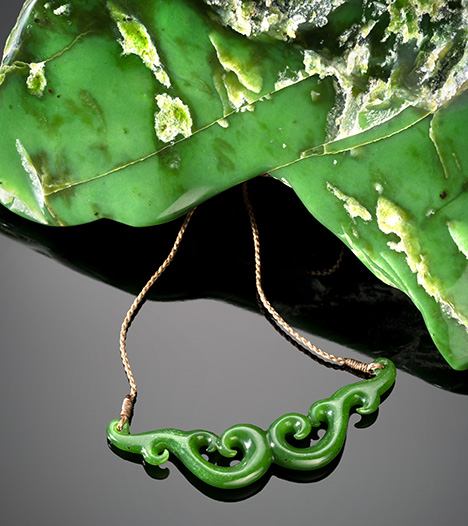 Figure 12. This 90 × 20 mm nephrite carving is from the Kutcho Jade mine in northwest British Columbia, Canada. Photo by Robert Weldon; courtesy of Jade West Group.
About the Authors

Heflik W., Natkaniec-Nowak L., Dumańska-Słowik A. (2014) Rodingite from Nasławice and the other occurrences of these rocks in Lower Silesia (SW Poland). Geological Quarterly, Vol. 58, No. 1, pp. 31–40.

Moska A. (2019) Natural and anthropogenic radioactivity of the Opava Mountains and their western foreland. PhD thesis. University of Silesia, Katowice, Poland (in Polish with English abstract).

Examines the effectiveness of hydrogen and oxygen isotopes in discriminating dolomite-related nephrites from the four most important occurrences worldwide.

Green nephrite deposits are found at many locations around the globe, with British Columbia, Siberia, and northwestern China as the leading producers.