Red calcareous coral is very popular in the Taiwanese market and has become far more expensive over the decades due to limited production and increasing demand. Red calcareous coral is usually cut into polished branches, beads, carvings, or cabochons. Recently, a bangle was submitted as calcareous coral to Taiwan Union Lab of Gem Research (TULAB) for identification service. It had a typical coral-red color (figure 1), though it was unusual to see a carved bangle due to the sizes of natural coral specimens that are found. 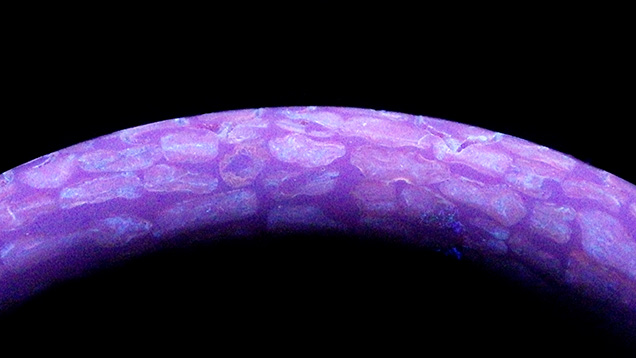 Standard gemological testing revealed that the refractive indices of this bangle were consistent with calcareous coral, at 1.48–1.65. However, its specific gravity of 2.27 was less than that of calcareous coral (2.6–2.7). Moreover, the short-wave ultraviolet fluorescence of this bangle presented a unique pattern of patches with chalky white to orange fluorescence next to each other (figure 2). Microscopic observations indicated that the patch-like fluorescence seemed to correspond to fragments of red calcareous coral, while the fragments were bonded with red material in which few bubble inclusions were found (figure 3). 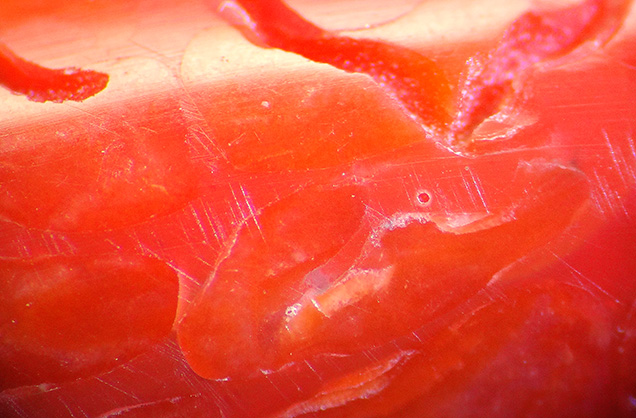 Figure 3. The microscopic image of the carved bangle indicated that the fluorescing patches seemed to be fragments of red calcareous coral, while the gaps between the fragments were filled with red foreign material with few bubble inclusions. Photomicrograph by Yu-Shan Chou; field of view 5.46 mm.

To further confirm the identity of this bangle, the patches and the bonding material in between them were analyzed by Raman spectroscopy, and the resulting spectra were then compared with those of epoxy and red calcareous coral reported in the literature (figure 4; see K.E. Chike et al., “Raman and near-infrared studies of an epoxy resin,” Applied Spectroscopy, Vol. 47, No. 10, 1993, pp. 1631–1635; S. Karampelas et al., “Identification of the endangered pink-to-red Stylaster corals by Raman spectroscopy,” Spring 2009 G&G, pp. 48–52). The results showed that the fluorescing patches were natural calcareous coral, while the bonding material in between was epoxy resin.

This kind of composite product was likely made by bonding the stacked coral fragments with red epoxy resin to form a bulk material, which was then processed into carvings, cabochons, or even bangles. Although the coral-epoxy composite product looked similar to natural calcareous coral, it could be accurately distinguished through specific gravity, ultraviolet fluorescence reaction, microscopic observation, and Raman spectroscopy.

Shu-Hong Lin, Kai-Yun Huang, and Yu-Shan Chou are affiliated with the Taiwan Union Lab of Gem Research in Taipei.

An orangy red plastic bead is revealed to be a composite when white coral fragments are identified by spectroscopy and gemological properties.

Items presented as red coral are revealed by testing to be composite coral veneers over an artificial matrix.