Composites assembled from opaque-to-translucent and transparent gem materials such as turquoise, chalcedony, opal, chrysocolla, tourmaline, and peridot have become popular over the past few years, as evidenced by the number of samples received for identification at the Gem Testing Laboratory in Jaipur, India. Recently, we examined an orangy red bead of plastic (figure 1) with embedded fragments of coral.

The round bead weighed 37.50 ct and measured 20.62 × 20.57 × 14.02 mm. The bead was represented as coral, but its smooth texture along with the luster was sufficient enough to rule out that possibility. A few spots of lighter color (again, see figure 1), visible to the unaided eye, made it more interesting. Under strong fiber-optic light, minute transparency was observed, while microscopic examination revealed numerous gas bubbles scattered throughout the bead. Sharp boundaries between the lighter spots and the host bead suggested that these spots of lighter color were actually fragments of some other material. These randomly oriented fragments also displayed some concentric radiating structures (figure 2, left), typically seen in carbonate-type corals. Some chips also showed elongated sections (figure 2, right), along with some whitish to faintly colored areas.

Figure 2. Some of the fragments embedded in the plastic bead displayed concentric radiating structures (left), typically seen in carbonate-type coral, while others show elongated sections (right). Also note the sharp edges and whitish to faintly colored areas of the fragments. Photomicrographs by Gagan Choudhary; field of view 5.08 mm.

Although the bead was obviously an artificial product, its major component was still to be identified. A spot refractive index of approximately 1.53 and hydrostatic specific gravity of 1.97 were obtained. Under UV light, the bead fluoresced orange, with a stronger reaction to short wave than long wave; a desk-model spectroscope revealed a broad absorption band from the violet to yellow-orange region. Raman spectroscopy (figure 3) confirmed the major component of the bead as plastic, while the grains were identified as carbonate. We did not detect any carotenoid-related peaks, which have been suggested as the cause of color in pink-to red-coral (C.P. Smith et al., “Pink-to-red coral: A guide to determining origin of color,” Spring 2007 G&G, pp. 4–15). On the basis of Raman spectra and concentric radiating structure, the sharp fragments were identified as white coral. 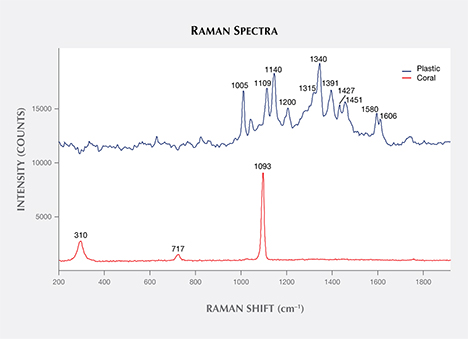 Figure 3. Raman spectra using 785 nm laser confirm that the major component of the bead is plastic (blue trace), while the grains are a carbonate such as calcite (red trace). The lack of carotenoid-related peaks suggests the use of white coral fragments.

Coral-plastic composites have been reported previously (e.g., Fall 2008 Lab Notes, p. 253). Further, orange-red plastics have also been known as coral imitations for decades. This specimen turned out to be notable because of the use of coral fragments as inclusions; however, we could not clearly understand its purpose.

Gagan Choudhary is the deputy director at the Gem Testing Laboratory in Jaipur, India.