GIA’s Tokyo laboratory recently examined a 34 ct oval cabochon of unique appearance. This cabochon consisted of a transparent yellow pseudohexagonal core in an opaque metallic-looking area (figure 1). Spot refractive indices (RIs) on both areas were 1.76, and specific gravity (SG) was 4.04. This appearance of a transparent yellow window with an opaque metallic surrounding area is reminiscent of pallasitic peridot, an olivine nodule enclosed in nickel-ion alloy of stony-iron meteorites (see J. Sinkankas et al., “Peridot as an interplanetary gemstone,” Spring 1992 G&G, pp. 43–51). However, no surface discontinuity between these two parts can be found with close observation under reflected light. Furthermore, this metallic-looking area exhibited six-rayed asterism. Under the microscope, negative crystals in a plane and healed fissures were found in the transparent area; densely packed needle-like inclusions, some crystals, and stained fissures were seen in the opaque area (figure 2). In addition to the microscopic observations, advanced testing of the yellow part revealed that this specimen was a natural corundum. The metallic appearance and asterism were caused by the strong reflection from the dense needle-like inclusions (figure 2), some of which were flat. These needles were identified as hematite and ilmenite by Raman spectroscopy. The slightly elevated SG of this specimen might have been caused by the abundance of these inclusions, since the SGs of both hematite and ilmenite are higher than that of corundum. 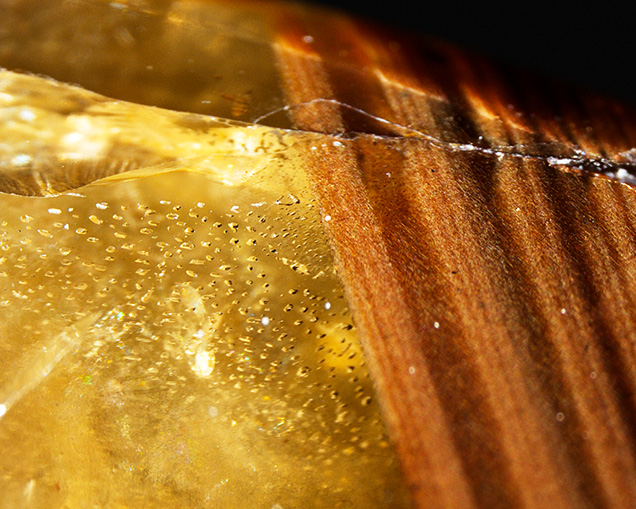 As previously documented (e.g. T.N. Bui et al., “From exsolution to ‘gold sheen’: A new variety of corundum,” Journal of Gemmology, Vol. 34, No. 8, 2015, pp. 678–691; N. Narudeesombat et al., “Golden sheen and non-sheen sapphires from Kenya,” Gem and Jewelry Institute of Thailand, July-August 2016, pp. 282–288; Winter 2016 Lab Notes, pp. 413–414), sapphires with golden shimmer caused by hematite needles are known as “golden sheen” or “Zawadi” sapphires in the trade. As with rutile needles in common star sapphires, hematite needles intersecting at 60 degrees can cause six-rayed asterism. Golden sheen sapphires sometimes have densely included parts, but such a distinct zoning of transparent and densely included parts has not been documented. This unique appearance may indicate a certain crystallizing condition of sapphires.

Yusuke Katsurada is a staff gemologist at GIA in Tokyo.

The chemical composition and spectroscopic characteristics of 14 gold sheen sapphires are examined.