Ethiopia has become a significant producer of opal, sapphire, and emerald in recent years. In addition, reports of gem-quality green garnets have started to emerge (B. Williams et al., “Tsavorite reportedly from Ethiopia,” Journal of Gemmology, Vol. 35, No. 8, 2017, pp. 702–704).

Todd Wacks (Tucson Todd’s Gems, Tucson, Arizona, and Vista, California) recently submitted three rough and one faceted garnet (figure 1, stones 1, 2, 3, and 4) to GIA in Carlsbad for scientific examination. He purchased the garnets from Inna Gem, which reported that the garnet mine is located near the town of Wbi and the new Dubuluk emerald deposit (Spring 2017 GNI, pp. 114–116). The stones showed obvious color change from yellow-green under daylight-equivalent lighting to orange-brown under incandescent illumination. This is similar to the color-change behavior reported for some color-change garnets from Sri Lanka (Spring 2017 GNI, pp. 137–138).

Figure 3. The color panels of four garnets (stones 3, 4, 5, and 6) under CIE A (incandescent) and CIE D65 (daylight-equivalent) illumination are quantitatively reproduced. The garnets’ colors are shown at different light path lengths (defined by stone thickness). For each sample, the top and bottom rows represent the color under incandescent light (A) and daylight-equivalent light (D65), respectively. For calculation methods, please see Sun et al. (2017).

UV-Vis-NIR spectra (figure 2) were collected and corrected for reflection loss. These spectra were then used to quantitatively calculate the color of the garnets at a wide range of path lengths and under different lighting conditions. In addition to two of the Ethiopian grossular garnets, UV-Vis spectra were also collected on the non-Ethiopian tsavorite (stone 5) and the non-Ethiopian demantoid (stone 6) for comparison. The chemistry of stones 5 and 6 is also reported; see the supplementary table S1. 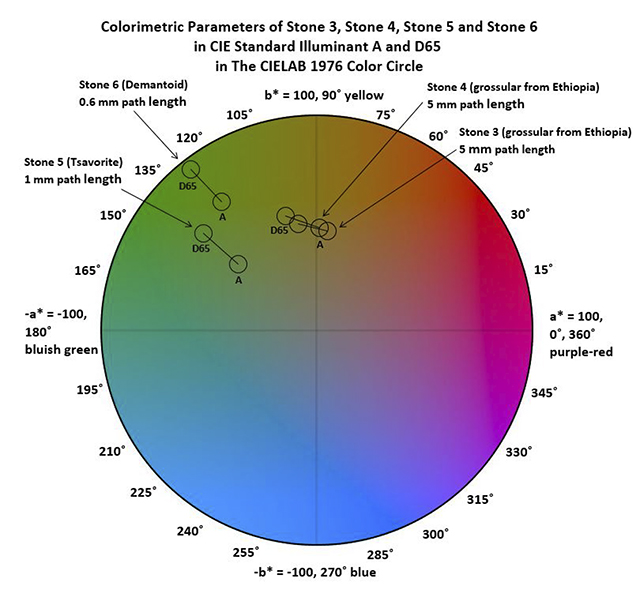 One way to judge the quality of a color-change stone is to plot the color panel pair in the CIE 1976 color circle. Good color-change pairings show a large hue angle difference, a small chroma difference, and large chroma values (Z. Sun et al., “How to facet gem-quality chrysoberyl: Clues from the relationship between color and pleochroism, with spectroscopic analysis and colorimetric parameters,” American Mineralogist, Vol. 102, No. 8, 2017, pp. 1747–1758). The color coordinates of the four stones in daylight-equivalent (D65) and incandescent (A) illumination were plotted in the CIE 1976 color circle (figure 4). Ethiopian grossular stone 4 had the largest hue angle difference among the four stones and a relatively small chroma difference. The non-Ethiopian tsavorite and demantoid both had a very small hue angle difference that was close to zero but with large chroma difference.

One interesting observation is that the Cr3+ absorption band shifted significantly from 627 in demantoid (stone 6) to 599 in the Ethiopian grossulars (stones 3 and 4; all stone samples contained little V). This shift opens a transmission window B in the red region shown in figure 2. To our knowledge, color-change behavior has not been reported in tsavorite or demantoid. This is because the absorption bands of V3+ at the 610 region in tsavorites (green grossular) or of Cr3+ at the 627 nm region are dominated by Cr3+ in demantoids and prevent the transmission of red light in these stones. In other words, there is no transmission window in the red for tsavorite or demantoid. However, these Ethiopian grossulars have little V3+, and the Cr3+ absorption is shifted away from the red region, which allows for significant transmission of red light through these stones. This creates a transmission window that produces significantly different color for the Ethiopian grossular in incandescent illumination versus daylight. To the authors’ knowledge this was the first group of color-change gem-quality chrome grossular garnet reported.

A report on a new Ethiopian source of high-quality emerald.

A color change in rough garnet is observed and plotted in GIA’s Carlsbad lab.