During the 2016 Tucson Gem and Mineral Show, Jeff Aylor provided several transparent rough garnets, reportedly from Sri Lanka, to GIA for scientific examination. We noticed that the rough garnets showed obvious color change from yellow-green under daylight equivalent lighting to orange under incandescent illumination. Three rough garnets were polished into wafers and analyzed to fully understand the chemistry and color behavior of the material.

Standard gemological testing of three garnet wafers .revealed a refractive index (RI) from 1.76 to 1.77; hydrostatic specific gravity (SG) ranged from 3.93 to 4.00. Fluorescence was inert to long-wave and short-wave UV light. The stones did not show any pleochroism when utilizing the dichroscope. Using a handheld spectroscope, absorption lines in the blue and violet section, and very weak absorption bands at 520 and 573 nm, were observed. Microscopic examination showed intersecting long and short needles throughout. Graphite and quartz inclusions were also observed. All of these properties are consistent with garnet.

The color of the three wafers was quantitatively calculated by using the visible spectra (Z. Sun et al., “Vanadium and chromium bearing pink pyrope garnet: characterization and quantitative colorimetric analysis,” Winter 2015 G&G, pp. 348–369). The color of each wafer can be presented by using CIE L*a*b* and RGB color coordinates, as seen in table 2. The calculated color panels of three wafers under daylight-equivalent lighting (CIE D65 illumination) and incandescent lighting (CIE A illumination) are shown in the bottom row of the figure above. The three wafers were also photographed under both fluorescent light and incandescent light to compare with the panels in the top row.

One way to judge the quality of a color-change stone is to plot the color pair in the CIE 1976 color circle. Good color-change pairings show a large hue angle difference, small chroma difference, and large chroma values (see table 2). The color coordinates of the three wafers were plotted in the CIE 1976 color circle (see below). The color change of this material is not very significant, but is definitely observable. 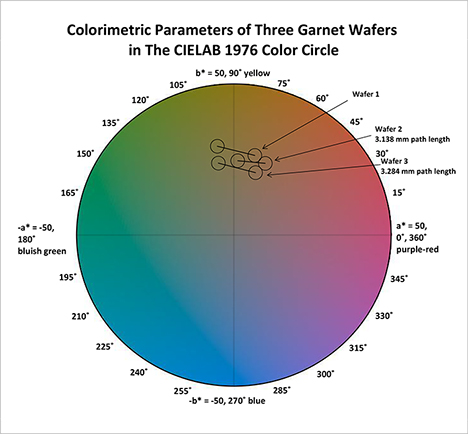 Eight garnet species are defined and methods of identification are described.