“Beeswax” amber, a common trade name used in the Chinese gem market, refers to yellow amber that has a semitranslucent, opalescent, milky appearance with greasy luster. Among the beeswax ambers, “chicken-fat yellow beeswax” is very popular for its bright color. Global production is limited, and the material is in high demand in the Chinese amber market. Therefore, many methods to enhance the color of beeswax amber have been attempted. In March 2016, the Guangzhou laboratory of the Gem Testing Center, China University of Geosciences (Wuhan) received four pieces of chicken-fat yellow beeswax amber samples from two different clients (figure 1); two more pieces were received in May from an unrelated owner (figure 2).

Figure 2. The two bright yellow beads in the center, 8 mm and 9 mm in diameter, were treated by steam dyeing, while the bracelet contains natural-color amber. Photo by Jiewan Huang.

Infrared spectroscopy showed all ambers with typical “Baltic shoulder” patterns in the 1100–1300 cm–1 range, with low and broad bands in higher frequencies and a high, sharp peak at 1160 cm–1. Instead of the whitish yellow of natural Baltic ambers, we saw either bright yellow or orange hues, both of which are unusual. Under strong transmitted light, the yellow color of the round bead in figure 1 (left) showed a mottled distribution, which was proof of uneven dyeing (figure 3); however, microscopic examination revealed small squashed bubbles caused by “steam treatment.” Further, red color filaments unrelated to the cracks among the bubbles near the surface were traces of residual dyes (figure 4, left). 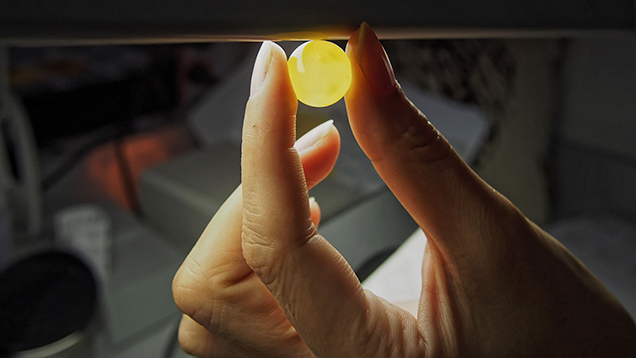 Figure 3. The darker mottled color patches in this sample indicate that the bead was unevenly dyed. Photo by Fen Liu.

The color of the pear-shaped samples appeared to be darker than the yellow associated with chicken-fat amber (again, see figure 1, right). This darker color faded slightly when the surface was swabbed with alcohol. Under 40× magnification, the bubbles appear to have yellow meniscuses. The bubble-rich regions were darker than the portions with fewer bubbles. In some areas among the bubbles, an abnormal dark orange color zone appeared to be induced by residual color matter (figure 4, right). All these observations indicated the amber pieces underwent some artificial treatment. The clients admitted that these beeswax ambers were treated by a new treatment method, called “steam dyeing,” which delivers gas bubbles from colored water into the amber structure at pressure and temperature conditions close to those of saturated water vapors.

Steam dyeing treatment is easy to miss. The rapid development in amber treatment methods means that consumers and laboratories must be cautious when dealing with these “chicken-fat yellow beeswax” ambers.

Amber samples were heat-treated, using various procedures and parameters, in an effort to reproduce materials found in the jewelry market.