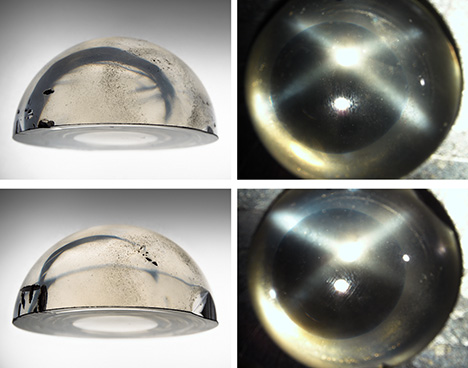 The New York laboratory received two cabochon diamonds from Hong Kong, both displaying asterism. Gemologists initially questioned whether these stones were in fact diamond because of the cabochon cutting style and the white four-rayed “stars” observed using fiber-optic illumination. The polished cabochon is a popular cutting style in colored stones but rarely attempted with diamond due to its hardness. This cutting and polishing technique yielded two semitransparent to translucent round cabochon diamonds with a very light yellow color, weighing approximately 6.29 ct and 6.07 ct (figure 1). 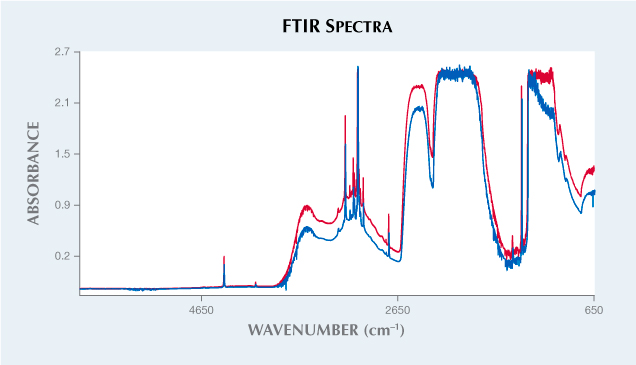 Figure 2. FTIR spectra reveal natural type Ia diamonds with strong hydrogen concentrations in the 3000–4000 cm–1 region and aggregated nitrogen in the one-phonon region at 1400–800 cm–1. The 6.29 ct diamond cabochon spectrum is denoted in red and the 6.07 ct diamond in blue.

Mid-infrared spectroscopy revealed strong hydrogen-related absorption bands (e.g., 3107 cm–1) and those attributed to aggregated nitrogen in the one-phonon region, evidence of natural type Ia diamonds (figure 2). Microscopic observation from the base of the cabochons revealed prevalent clouds distributed throughout the diamonds. The clouds were composed of small whitish pinpoints, and when aligned linearly formed small needle-like internal inclusions (figure 3).

Fluorescence images collected using the DiamondView revealed yellowish green fluorescence in the sectors with clouds. The cloud-free sectors were inert to UV radiation. Symmetrical fluorescence patterns were observed in both stones with nearly mirror images (figure 4).

Figure 4. DiamondView images of the very light yellow round cabochon diamonds reveal the location of asterism using ultra-short-wave illumination, approximately 225 nm. The top view is shown on the left in each pair of images, the bottom view on the right. Images by Christopher Vendrell and Kyaw Soe Moe.

Gemological and spectroscopic features strongly indicated that these diamonds were cut from the same large rough diamond crystal. The crystal was very likely cut through the center along the (100) plane and then polished into two relatively large cabochon diamonds. Taking advantage of the widespread needle-like inclusions in this otherwise well-included large diamond crystal was a clever design choice to produce two cabochons displaying the rare asterism phenomena.

Erica A. Watts is a gemologist trainee at GIA in New York.

Lotus Gemology receives submissions of star stones on a regular basis, so when we first saw the specimen shown here, it appeared to be one among many of our usual stones to test.

Stars Are Out in Paraíba Tourmaline

Elise A. Skalwold and Nathan Renfro

An opal featuring a rare six-rayed star is examined in GIA's Bangkok lab.