Fossils are the remains or impressions of prehistoric organisms preserved from past geological ages. Some of the most common fossils are shells of various marine mollusks and, occasionally, their associated pearls (Winter 2015 Lab Notes, pp. 432–434). Recently two interesting fossilized specimens were studied by staff of GIA’s New York laboratory. One resembled a shell blister and the other a blister pearl, both with associated shell (figure 1).

The smaller sample appeared to be a shell fragment measuring approximately 24.4 × 18.6 × 6.5 mm and weighing 12.62 ct. The back of the shell showed even striations and a cellular crystal growth pattern, while the cross section showed a columnar structure (figure 2). A shallow “bump” noted on the face side could be best described as a shell blister, according to a recent study (“Natural shell blisters and blister pearls: What’s the difference?” GIA Research News, https://www.gia.edu/gia-news-research/natural-shell-blisters-and-blister-pearls). No additional information was provided about this specimen. 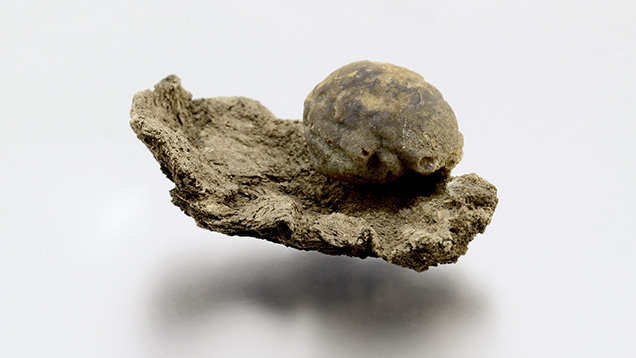 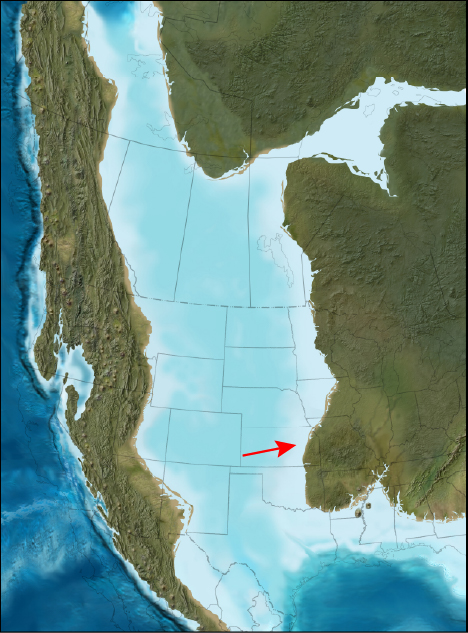 The second sample measured approximately 37 × 25 mm and weighed 32.63 ct. Its form resembled a concave shell fragment, and a near-round blister pearl was clearly attached to its inner surface (figure 3). According to our source, this specimen was found in Ellis County, Kansas, and formed within an Inoceramus mollusk genus (an extinct marine bivalve resembling the related winged pearly oysters of the extant genus Pteria). Fossils of the Inoceramus are commonly found in the Pierre Shale of the Western Interior Seaway in North America, where the state of Kansas lies today (figure 4). The specimen is reportedly estimated to be as much as 86 million years old.

EDXRF analysis detected low concentrations of manganese and high concentrations of strontium, typical of marine mollusks. Iron was also detected in both specimens, probably introduced through infiltration from the surrounding environment over millions of years. Microradiography did not reveal any clear internal growth structures. These two intriguing specimens created by Mother Nature and preserved by her until their discovery provide unique insights into ancient mollusks and their associated pearl or pearl-like companions.

Chunhui Zhou is manager of pearl identification at GIA in New York. Tao Z. Hsu is a technical editor of Gems & Gemology at GIA in Carlsbad, California.

Two blister pearls attached to a host shell believed to have fossilized during the later Pleistocene period and discovered in southeastern Kenya are studied.