Fossil pearls, first mentioned in 1723 in John Woodward’s “An essay towards a natural history of the earth and terrestrial bodies,” were described in greater detail by R. Bullen Newton in 1908 (“Fossil pearl-growths,” Journal of Molluscan Studies, Vol. 8, pp. 318–320). It is a rare occurrence to receive such pearls at GIA, which is why two large fossil blister pearls recently submitted to the New York laboratory immediately caught our attention.

According to the client, the pair of fossil blister pearls were found near Lunga Lunga, a region in southeastern Kenya bordering Tanzania. They were found attached to a fossilized giant clam shell that weighed approximately 297 kg and was discovered 4.3 meters below ground (figure 1) along with some fossilized corals. The shell, along with the attached pearls, was presented to the client as a gift from a local Digo tribe. It took a month to remove the entire shell from the ground. Similar fossilized giant clam shells have been recovered from areas along the Kenyan coastline (G. Accordi et al., “The raised coral reef complex of the Kenyan coast: Tridacna gigas U-series dates and geological implications,” Journal of African Earth Sciences, Vol. 58, No. 10, 2010, pp. 97–114). These two blister pearls were subsequently removed from the shell and submitted to GIA for identification after cleaning and removing the outermost fossilized debris. 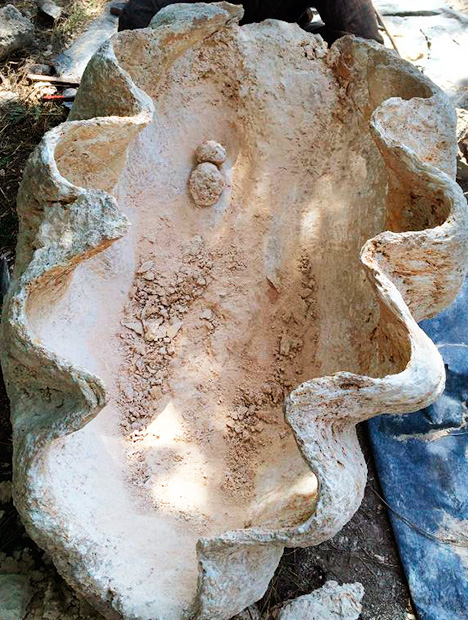 The blister pearls measured approximately 58 × 47 × 45 mm and 85 × 70 × 46 mm and weighed 758 ct and 1256 ct, respectively. The faces of these pearls had a porcelaneous appearance and were smoother than the bases, which were attached to the clam shell. These bases showed chalky rough surfaces and flared forms (figure 2). Numerous natural indentations and cavities were present on their surfaces. In some areas, subtle flame-like structures were also observed at 10× magnification with the use of fiber-optic lighting (figure 3).

Microradiography was not helpful owing to the specimens’ sizes, but Raman spectroscopy was able to detect calcite on both specimens and aragonite on the larger pearl, although it is possible there was aragonite in untested areas on the small pearl. The presence of aragonite in the larger pearl indicates that some of those structures had been replaced by calcite during fossilization.

Figure 2. The two natural fossil blister pearls after removal from the giant clam shell. The left image shows the face-up view, while the right image shows the base of the pearls, where the clam shell was previously attached. Photos by Sood Oil (Judy) Chia. 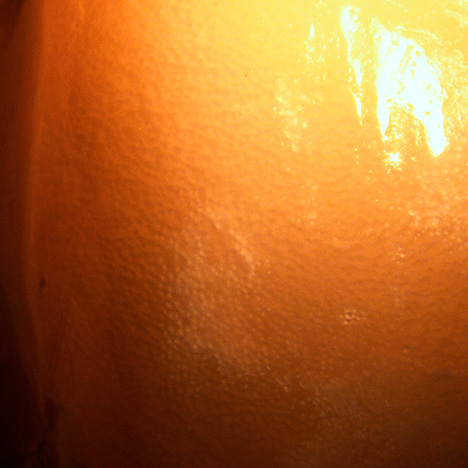 Figure 3. Porcelaneous and flame-like structures, seen here on the surface of the larger fossil blister pearl, were observed in some areas under fiber-optic lighting. Photo by Joyce Wing Yan Ho; field of view 15 mm.

According to the client, the shell in figure 1 was found in the upper layers of secondary fossil reef build-up, suggesting that it lived there during the later Pleistocene period. To the authors, the shell looks similar to that of the present-day Tridacna gigas giant clam, but the client stated that the clam was a precursor called Tridacna gigantea. The large size of these fossil blister pearls, their unique appearance, and the story behind their discovery proved fascinating, and offered valuable gemological and scientific information for future reference.

Chunhui Zhou is research scientist and supervisor of pearl identification, and Joyce Wing Yan Ho is a gemologist, at GIA in New York.