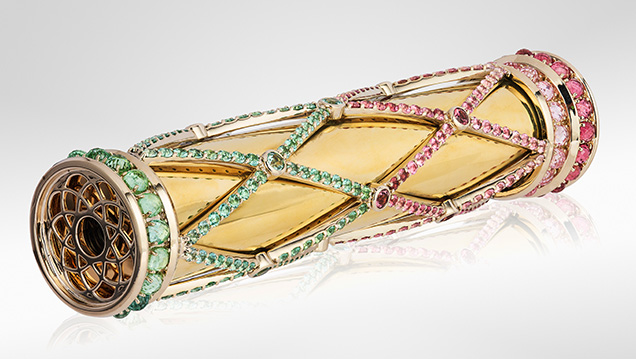 Derek Katzenbach, winner of multiple AGTA Spectrum Awards, was once a marine biology student visiting a local gem show. Until then, the thought of working in a creative industry had never crossed his mind. He spent much of his savings at that show, leaving with a bag full of stones but no idea what to do with them. He decided to take jewelry manufacturing classes and learn more as an apprentice in a jewelry store. The owner convinced Katzenbach to attend GIA, where he completed the Graduate Gemologist and Graduate Jeweler programs. There he honed his skills and learned new techniques.

He also saw a lot of gems, triggering an interest in lapidary and how brilliance and scintillation can influence appearance. A friend taught Katzenbach the basics of faceting, and he kept practicing and experimenting with different patterns. He started working with concave faceting, inspired by the work of Dalan Hargrave and Richard Homer. Eventually he spent a week with them to refine his technique. After graduating from GIA, he went back to work at the same store for five years before starting his own business.

In his experience, gem cutters and metalworkers look at stones very differently. Having a background in both fields gave him a unique advantage in pushing boundaries and experimenting even further.

One of Katzenbach’s most celebrated pieces is a kaleidoscope, shown in figure 1, called “Colors of Maine.” For this he chose Maine tourmaline (the official gem of his home state) and Maine quartz. Most of the gems in the kaleidoscope come from Plumbago Mountain, where about a ton of gem tourmaline was recovered between 1972 and 1974. The green tourmalines are from the Havey mine. Apart from the cutting of melee and very small stones, Katzenbach did most of the work himself. 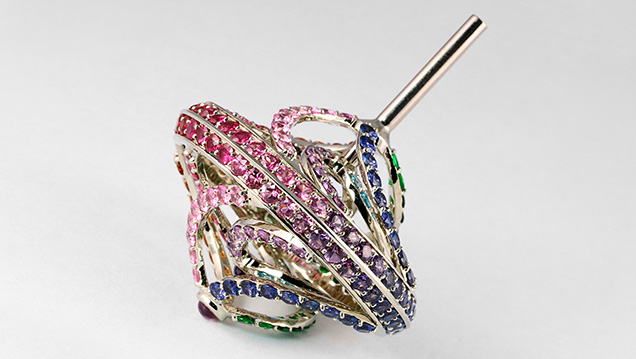 “Colors of Maine” won first place in the Objects of Art category at the 2017 AGTA Spectrum Awards. Afterward, the piece was bought and donated to GIA, where it is on display at the Carlsbad campus with other Maine tourmalines. Creating the kaleidoscope sparked Katzenbach’s interest in objets d’art. He had always been fascinated by such pieces but found most of them boring and restricted because you cannot touch them. Katzenbach wanted to do something different. This gave him the idea to create a spinning top (figure 2) reminiscent of a rainbow. He used a variety of gemstones—including sapphire, alexandrite, tourmaline, tsavorite, and other garnets—to create this 18K gold toy that no one can resist spinning. The top can be seen in motion at https://www.gia.edu/gems-gemology/spring-2019-gemnews-derek-katzenbach. 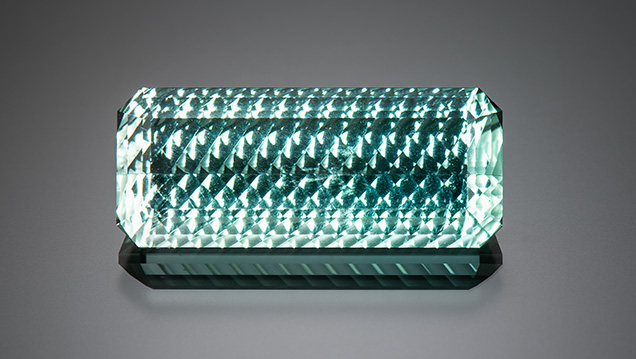 Katzenbach also creates traditional jewelry. He has always been drawn to a mix of modern pieces with micro-pavé and the lacy textures of Victorian and Edwardian jewelry, but he loves to add color to them. He works mostly with locally sourced Maine minerals, which he finds through miners, collectors, and even museums. Tourmaline (figure 3) is the most common, but he also uses garnet, aquamarine, smoky quartz, and rare minerals. He occasionally sources internationally, but his favorite gems are Oregon sunstone and Montana sapphire.

Katzenbach would like to get back into engraving, something he enjoyed during his time as a gemology student. He feels that many great gemstone and jewelry artists, including carvers, metalsmiths, and gem setters, are embracing each other’s work and actively looking for collaborations. This will inevitably lead to new and exciting jewelry creations in the coming years.

Wim Vertriest is supervisor of field gemology at GIA in Bangkok.

Watch custom jeweler Derek Katzenbach's interview on the creation of his incredible 18k gold kaleidoscope with 71.74 ct of Maine tourmaline and 60.05 ct of Maine quartz, on exhibit at GIA's museum in Carlsbad.
Learn More