Negative crystals, or cavities within a crystal, and fluid inclusions occur in almost every mineral. They are generally too small to notice without high magnification, but these modest features hold great beauty and scientific value. These microscopic features are valuable to understanding the growth of continents, the rise of mountains, and the formation of gems. The following photos show beautiful examples of such inclusions in sapphires from the Baw Mar mining area in Mogok, Myanmar. Some of these fluid inclusions are arranged in a “rosette” pattern consisting of a large flattened negative crystal surrounded by smaller ones. This structure is always seen perpendicular to the c-axis (figure 1). The larger primary inclusions like those seen in figure 2 are characterized by their high relief and may display triangular growth markings as well as beautiful iridescence under oblique fiber-optic illumination. Other negative crystals associated with healed fissures are observed in random orientation. The smaller, more delicate fluid inclusions in these structures have a smoother outline, while the fingerprints themselves are often associated with the primary negative crystals. 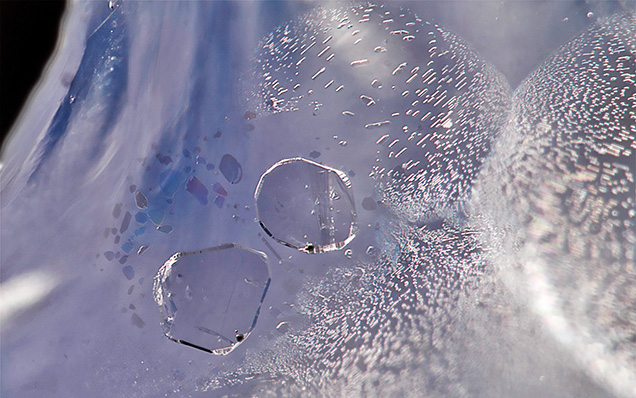 Figure 2. These two large primary fluid inclusions containing a black solid phase are associated with fingerprints that have a variable orientation. The photo was taken along the c-axis in darkfield illumination. Photomicrograph by Victoria Raynaud; field of view 1.07 mm.

The multiphase inclusion in figure 3 contains a gas, a liquid, and at least one solid. When the specimen was gently heated by the microscope’s well light, the gas and the liquid homogenized. Raman spectroscopy identified the gas phase as pure CO2 and the opaque solid as marcasite. Using the same method, we also identified diaspore fibers, seen as faint lines in the inclusions, and a miniscule siderite crystal. Although fluid inclusions are common in most blue sapphires, the examples from Baw Mar reveal these fascinating inclusions in an appealing way.

Figure 3. Left: A large fluid inclusion containing a CO2 gas bubble and a marcasite crystal. The primary inclusion is surrounded by smaller inclusions that make up a healed fissure. Right: When the sample was gently heated, the gas bubble disappeared as the gas and liquid homogenized. The sample is illuminated using diffused backlighting. Photomicrographs by Victoria Raynaud; field of view 1.20 mm.

These photos were taken as part of a research project to document the blue sapphires from the Baw Mar mine. The complete report of this study can be found at https://www.gia.edu/gia-news-research/blue-sapphires-baw-mar-mine-mogok-myanmar.

Victoria Raynaud is a trainee analyst, and Wim Vertriest is a trainee in the field gemology department, at GIA in Bangkok.

Phase changes illustrate the temperature and pressure conditions in the fluid inclusion system of a Sri Lankan sapphire.

Nathan Renfro, John I. Koivula, and Elise A. Skalwold