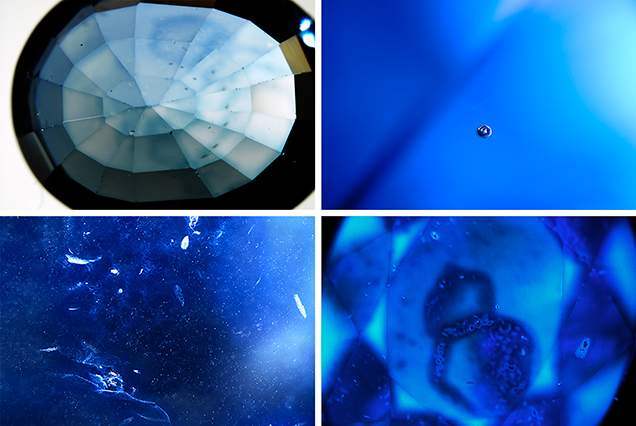 Figure 1. Top left: Color concentration was seen along the pavilion facet junctions of the synthetic sapphire, and blue halos were shown on the table facet. Top right: A spherical gas bubble was observed. Bottom left: Numerous clouds were visible throughout the stone. Some formed fingerprint-like patterns. Bottom right: Under the DiamondView's short-wave UV radiation, blue fluorescence was absent where there were concentrations of the diffusion color in the stone. Photos by Jonathan Muyal (top and bottom left) and Nicole Ahline (bottom right). Fields of view: 9.61 mm (top left), 1.25 mm (top right), 2.9 mm (bottom left), and 8.58 mm (bottom right).

GIA’s Carlsbad laboratory examined a 4.21 ct faceted blue oval. Standard gemological testing determined that the stone was uniaxial negative and had a refractive index of nε = 1.759 and nω = 1.769, with a corresponding birefringence of 0.010. Hydrostatic specific gravity was measured as 4.00. The stone was inert to long-wave UV and showed medium chalky blue color to short-wave UV. These properties were consistent with heated sapphire, either natural or synthetic. Under magnification and diffused transmitted lighting, a blue color concentration was observed along the facet junctions on both the pavilion and crown facets, along with a few large blue halos on the table facet (figure 1, top left), which indicated that the stone had been titanium diffused (R.E. Kane et al., “The identification of blue diffusion-treated sapphire,” Summer 1990 G&G, pp. 115–133; Summer 2015 GNI, pp. 203–205). Under darkfield lighting, individual large spherical gas bubbles were present (figure 1, top right). Numerous clouds observed throughout much of the stone could have easily been mistaken for natural clouds. Some of them grouped to form natural-looking fingerprint-like inclusions (figure 1, bottom left). The stone’s internal characteristics indicated a melt-grown synthetic origin. However, when immersing in methylene iodide under crossed polarizers and viewing down the optic axis, no Plato lines were observed (see W. Plato, “Oriented lines in synthetic corundum,” Fall 1952 G&G, pp. 223–224). The absence of Plato lines does not rule out flame-fusion growth. The heat from diffusion treatment can reduce the visibility of Plato lines (S. Elen and E. Fritsch, “The separation of natural from synthetic colorless sapphire,” Spring 1999 G&G, pp. 30–41). More advanced testing is needed to reveal all the physical and chemical properties of this unique stone.

Laser ablation–inductively coupled plasma–mass spectrometry (LA-ICP-MS) analysis was performed on the girdle of the stone. Three laser ablation spots were drilled six times down into the stone. The concentration vs. depth profile is shown in figure 2. From the surface of the stone to around 180 µm depth, the Be concentration decreased from 76.8 to 13.9 ppma, Mg from 7.8 to 0.8 ppma, Ti from 580 to 391 ppma, Fe from 390 to 83.4 ppma, and Ga from 6.12 to 1.36 ppma. The results confirmed diffusion treatment, not only by Ti and Fe but also by Be, Mg, and Ga. The presence of Mo provided some indication of synthetic origin. In a GIA identification report, the stone was described as titanium and beryllium diffused. It is the first time GIA has examined a multi-elemental diffused and melt-grown synthetic sapphire.

Figure 2. The synthetic sapphire’s concentration vs. depth profile revealed that concentrations of Be, Mg, Ti, Fe, and Ga decreased significantly when the laser ablation spots went deeper into the stone.
About the Authors

A hexagonal boundary, usually found in natural material, is observed in a synthetic star sapphire.

The Separation of Natural from Synthetic Colorless Sapphire

Greater amounts of colorless sapphire—promoted primarily as diamond substitutes, but also as natural gemstones—have been seen in the gem market during the past decade.

The Identification of Blue Diffusion-Treated Sapphires