Recently, an 8.975 ct blue oval cabochon exhibiting asterism (figure 1) was submitted to the Indian Gemological Institute – Gem Testing Laboratory in Delhi for identification. Standard gemological testing revealed a spot RI of 1.76 and hydrostatic SG of 4.00. These properties were consistent with sapphire. 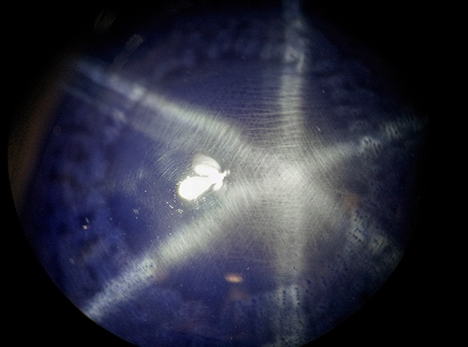 Microscopic examination at 25× magnification showed three-directional “needles” intersecting at 60°/120° angles (figure 2). Under 60× magnification, the three-directional needles appeared as a series of dots. The expected solid rutile needles were not resolved at the magnification used. These three-directional needles were further surrounded by a coarse hexagonal boundary (again, see figure 2) made up of gas bubbles (figure 3, left). The presence of the hexagonal boundary initially led to an impression of natural origin, but the presence of gas bubbles and chalky blue fluorescence under SWUV confirmed a synthetic origin. These three-directional needles (series of dots intersecting at 60°/120° angles) with possibly unresolved rutile needles are responsible for the six-rayed asterism. When the stone was checked in the DiamondView, it showed a dark blue ring around the gas bubbles (figure 3, right). This was the first time this author had seen such a reaction to gas bubbles in a synthetic material in the DiamondView.

Figure 3. Left: Gas bubbles appearing as whitish dots under 50× magnification. Right: DiamondView imaging of the gas bubbles. Notice the dark blue areas visible around the gas bubbles, which were inert to UV. This may indicate compositional variation where the whitish and dark areas are visible in the left-hand image. Photomicrograph and DiamondView image by Pragati Verma.

The three-directional intersecting needles that give rise to asterism in synthetic sapphire are a by-product of the titanium oxide added in the feed material for crystal growth. As mentioned above, the three-directional needles observed here were actually resolved microscopically as a series of dots, and the expected rutile needles were not observed. After growth, the boule was likely reheated, causing the previously disseminated titanium oxide to precipitate out as needles of rutile (R. Webster, Gems: Their Sources, Descriptions and Identification, 5th ed., rev. by P.G. Read, Butterworth-Heinemann, Oxford, UK).

When the sample was viewed in transmitted light, it appeared transparent in the center but translucent from the sides, resembling an eye (figure 4). No gas bubbles were visible in the center of the cabochon, but there were increasingly higher concentrations of gas bubbles toward the edges. Under SWUV, this material showed chalky blue fluorescence confined to the central transparent part. Such hexagonal patterns were previously reported in synthetic sapphire in G&G (Summer 2007 GNI, pp. 177–178). While observing any stone, one must not consider a single inclusion or characteristic, such as the hexagonal boundary observed here, as an indicator of natural or synthetic origin. There must be a thorough examination of all inclusions and properties (in this case, gas bubbles and chalky blue fluorescence under SWUV) to conclude the origin of a material. 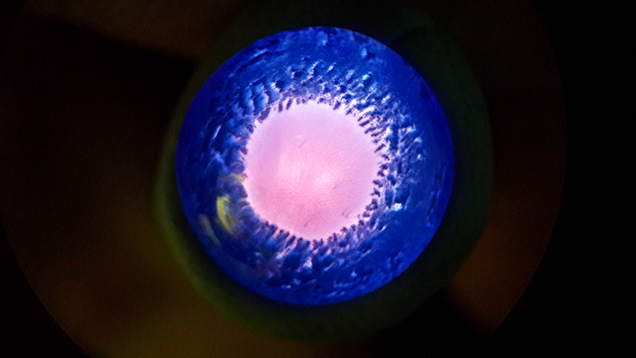 Figure 4. Under fiber-optic light, the material showed an eye-like pattern, with a pink and transparent center and blue and translucent sides. Also notice the hexagonal boundary made from the gas bubbles. Photomicrograph by Pragati Verma; field of view 22.94 mm.
About the Author

Pragati Verma is an executive gemologist with the Indian Gemological Institute – Gem Testing Laboratory in Delhi.

Diffusion treatment is used to induce color and asterism in a colorless synthetic sapphire.