Analysis of Yellow Diamond Melee for Color Treatment and Synthetics

Due to the size and quantity of diamond melee in a parcel, gemological analysis is usually not performed on each specimen. As a result, treated and synthetic diamonds are sometimes mixed with natural diamond melee in parcels (Winter 2014 Lab Notes, pp. 293–294).

Some gemological laboratories are able to properly identify treated and synthetic diamond melee with a combination of infrared absorption spectroscopy, photoluminescence (PL) spectroscopy, and DiamondView fluorescence imaging. GIA’s New York laboratory recently tested two parcels of yellow diamond melee submitted for this screening. The results of their examination highlight the importance of laboratory analysis to correctly establishing the nature and color origin of diamond melee.

A parcel of six yellow melee (figure 1), each weighing approximately 0.12 ct, was submitted to GIA for testing. Examination confirmed that all six were natural diamonds treated by HPHT (high-pressure, high-temperature) processing. A combination of mid-infrared absorption spectroscopy (4000–400 cm–1) and PL spectroscopy with 633 nm laser excitation was used to detect this HPHT treatment. Spectroscopic analysis in the mid-IR range revealed the presence of isolated single nitrogen impurities. Four stones contained both A- and B-aggregated nitrogen where the B-aggregate was dominant, while the remaining two contained B-aggregated nitrogen; all six contained isolated single nitrogen. PL spectroscopy revealed features that confirmed these were HPHT-treated diamonds.

Another parcel of 20 yellow diamond melee (figure 2), each weighing between 0.01 and 0.02 ct, was submitted for testing. Mid-IR absorption spectroscopy and DiamondView imaging revealed that three were untreated natural diamonds and one was an HPHT-treated natural diamond; the rest were HPHT synthetics (figure 3). Mid-IR spectroscopy also revealed that 17 of the melee were dominated by A-aggregated nitrogen, three contained both A- and B-aggregated nitrogen, and all 20 contained isolated single nitrogen. The DiamondView images revealed characteristic growth features that helped separate the HPHT synthetic and HPHT-treated material from the natural stones. The HPHT synthetics contained typical cuboctahedral growth patterns, while growth patterns associated with natural diamond formation were observed in the natural diamonds, both untreated and HPHT-treated. 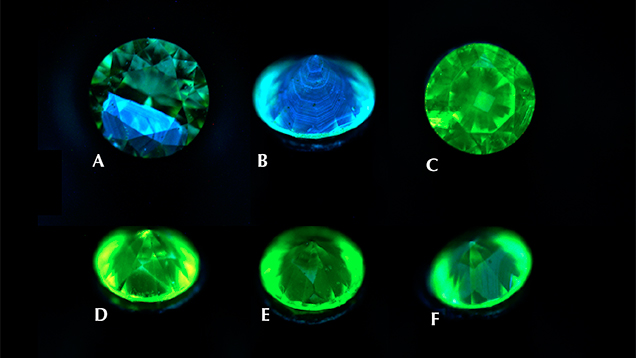 This analysis highlights the importance of laboratory testing to correctly identifying the nature and color origin of diamond melee, and to minimizing the risk of mixing treated and synthetic diamonds with natural melee in the marketplace.

Screening of Small Yellow Diamond Melee for Treatment and Synthetics