Eternity Natural Emerald (Ridgewood, New Jersey) exhibited a number of fascinating stones at the AGTA show. The emerald melee from Afghanistan (figure 1) immediately caught our attention. One of the authors was present in Afghanistan when Eternity’s Arthur Groom examined the original material (called “pencil rough” for its long and thin shape). The color was retained even when cut into small stones.

This rough is typically not treated, but a consistent supply of Afghan emerald is difficult to obtain. Prices are high, and negotiating is complex. Security concerns make it difficult to move rough in the country, and material is often smuggled to Dubai for the international market. To purchase the material, the company makes four to six buying trips a year, with permanent buyers located in Kabul and the Panjshir Valley. Much of the rough consists of the pencil crystals used for cutting precision melee. Once the pencil rough is sawn and preformed, the stones are cut for maximum brightness and the tightest measurement tolerances possible. All melee is cut in Sri Lanka.

The emeralds were displayed in a variety of cuts and sizes. Most of the production is between 2 and 4 mm; they try to cut the melee within 0.05 mm tolerance. Mr. Groom expects to unveil 10,000–15,000 carats at the 2016 JCK show in Las Vegas. Eternity Emerald is also purchasing rough from Zambia and Brazil to ensure a continuous supply of melee.

We also saw a 12.52 ct cushion-cut emerald (figure 2) that came from a 60 ct Afghan rough. The stone was difficult to cut because the rough was highly fractured and color zoned. Also from the 15,000-carat parcel purchased this year were four stones that did not require enhancement, the largest of which weighed 4.61 ct. Mr. Groom estimated that, given the same size and quality, the value difference between treated and untreated emerald ranges from 20% to 100%. 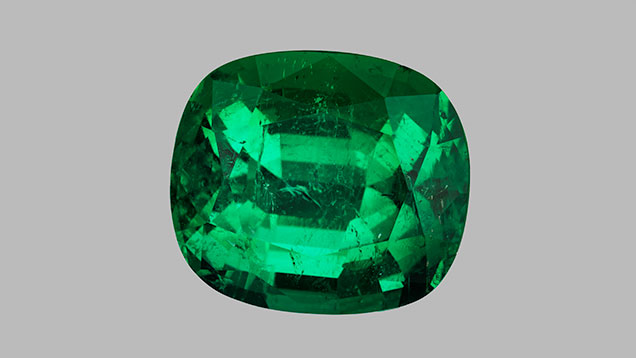 Also on display was a 17.14 ct ruby that had the intense red color of marble-hosted material and a slightly sleepy transparency. The untreated ruby was cut from a 45.37 ct rough, part of a parcel of more than 1,000 carats, purchased directly from Tajik miners in May 2015. While this rough is available within Tajikistan, Mr. Groom said the material is not easily found on the global market. The asking prices for the rough were high and firm. The parcel was much more difficult to evaluate than ruby from Myanmar or Mozambique, as the rough was highly fractured. This is not uncommon for Tajik ruby, and it makes determining the yield and quality of the finished stones problematic. Due to the fracturing of the rough, heat treatment may not be a viable option for color improvement. The parcel yielded a total of nine faceted stones, none of which were heat treated. The largest, a 21.17 ct stone, was cut from the original 45.37 ct rough. A large black inclusion was still visible after cutting. After being shown to several potential buyers, the ruby was recut to 17.14 ct. The inclusion was less visible in the resulting gem (figure 3), and the color and brightness were also improved. Mr. Groom said recutting increased the ruby’s overall value more than 30%. 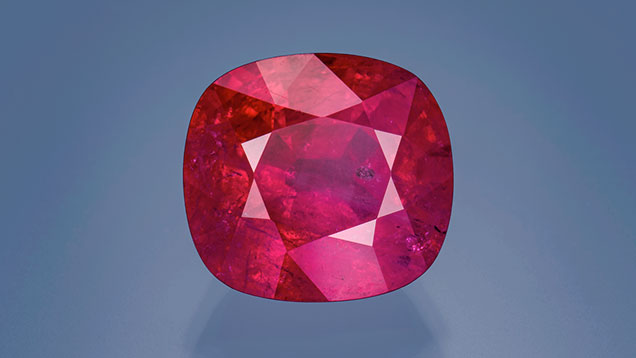 At the booth, we also saw photos of their clarity-enhanced tourmalines. Clarity Enhancement Laboratories (CEL) performs the filling of the surface-reaching fractures. Mr. Groom pointed out that fracture filling of tourmaline is nothing new. Most of the material he has seen in the market has been filled with oils and resins, often without disclosure, since the trade has not traditionally thought of fracture filling as a way to improve tourmaline’s apparent clarity. In August 2015, CEL announced tourmaline clarity enhancement service. The process, which is similar to its ExCel method for filling emerald fractures, is offered in their New York City laboratory for all colors and varieties of finished tourmaline. This treatment is not available for rough material. 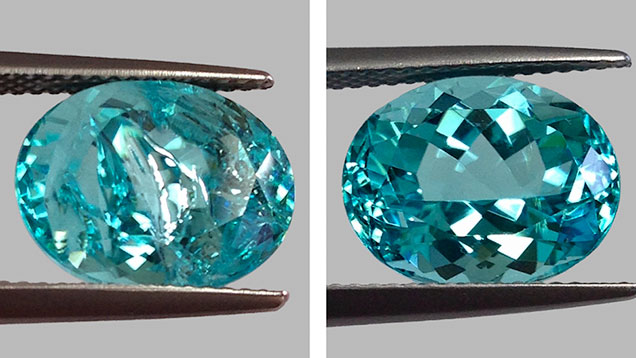 Figure 5. Prior to treatment, the highly visible fissure detracted from the rubellite’s clarity (left). After treatment, the fissures were less visible, and the stone had a more uniform clarity (right). Photos courtesy of Eternity Natural Emerald.

Although they will fill any variety and color of tourmaline, CEL has mostly received Paraíba (figure 4), rubellite (figure 5), and bicolor material. Mr. Groom attributes this to the intrinsically higher values for these varieties. These color varieties often have surface-reaching fractures, and the filling process makes the material much more marketable. Since there is a high demand for these types of tourmaline, treated goods are still of value to dealers. Mr. Groom hopes to promote CEL’s clarity enhancement method as a positive thing that will be fully disclosed through the value chain.