From time to time in the laboratory, we run into problems that we just cannot resolve. Just such a situation was recently encountered when we examined a very unusual 10.82 ct transparent euhedral crystal of orange-pink euclase measuring 14.71 mm wide, pictured in figure 1. We knew from experience that the natural surface striations on this transparent crystal would make conclusive identification of the inclusions difficult at best. The euclase crystal, recently recovered during limited mining in Livramento de Nossa Senhora in Bahia, Brazil, was acquired from Luciana Barbosa of the Gemological Center in Asheville, North Carolina. The cause of the unusual padparadscha-like orange-pink color of this euclase production was determined to result from impurities of Mn3+ (L. Gilles-Guéry et al., “Mn3+ and the pink color of gem-quality euclase from northeast Brazil,” accepted by American Mineralogist, 2021). 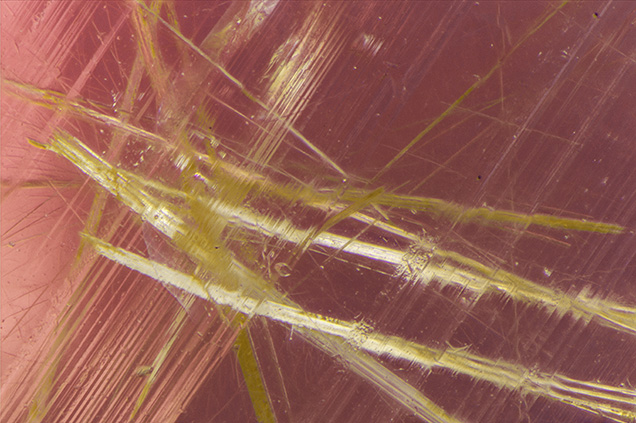 On examination with a gemological microscope, we observed fine branching fibers and rods of white to red-brown color suspended in the euclase (figure 2). The red-brown color of some of the inclusions suggested epigenetic alteration at some point. 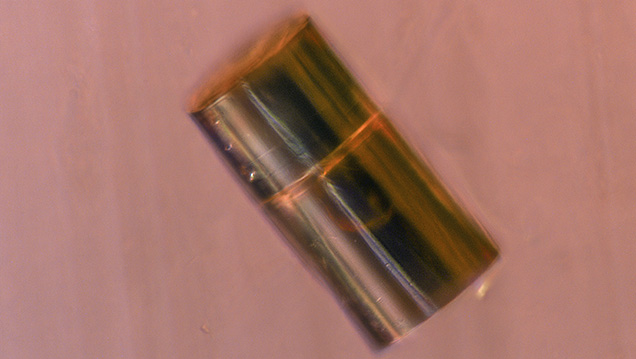 Figure 3. With a dark brown fluid and a moving bubble, this tiny cylindrical void was a surprising discovery. Photomicrograph by Nathan Renfro; field of view 0.288 mm.

As shown in the photomicrograph in figure 3, we observed a tiny hollow cylindrical void containing a dark brown fluid and a mobile gas bubble. The color of the fluid made it difficult to clearly see the gas bubble, unless it was moving.

As we suspected, laser Raman microspectrometry could not pin down the identification of the inclusions. Raman testing only showed the peaks for the euclase host. We also tried energy-dispersive X-ray fluorescence (EDXRF) to pick up any hints of unusual chemistry, but again useful information eluded us. After several tries at both Raman and EDXRF, we finally realized that destructive analysis would be needed for a clear identification of the inclusions. Since this well-formed euclase crystal has a very rare and unusual color, we decided not to use destructive analysis. We would keep the euclase intact, to be enjoyed as a gem mineral specimen.

John Koivula is analytical microscopist, and Nathan Renfro is manager of colored stone identification, at GIA in Carlsbad, California. Ian Nicastro is manager of the Pasquinelli Lab at University of California San Diego.

The very lightly etched green fluorite crystals that come from the Rogerley mine, located in Rogerley Quarry, Weardale, County Durham, England, are well known for the beautiful bright fluorescence they display.