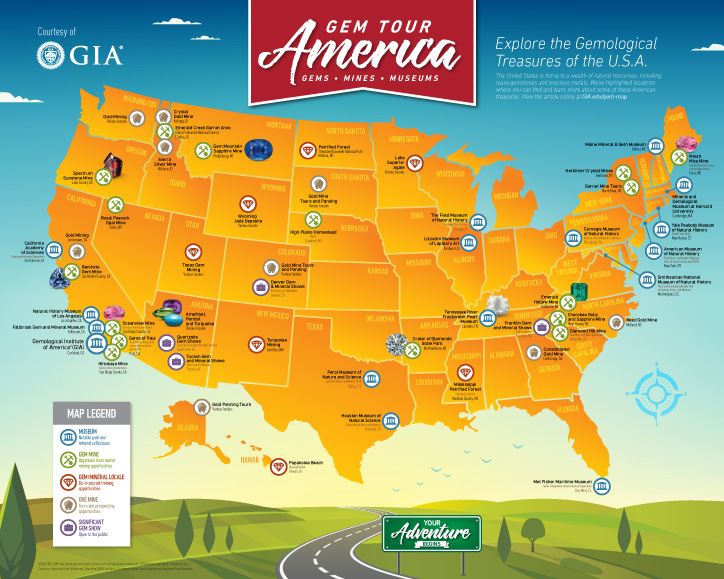 Explore the Gemological Treasures of the U.S.A.

The United States is home to a wealth of natural resources, including many gemstones and precious metals. We’ve highlighted locations where you can find and learn more about some of these American treasures. 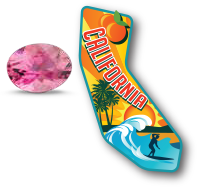 Tourmalines make up a group of closely related mineral species that share the same crystal structure but have dierent chemical and physical properties. They share the elements silicon, aluminum, and boron, but contain a complex mixture of other elements such as sodium, lithium, calcium, magnesium, manganese, iron, chromium, vanadium, fluorine and sometimes copper. Very few gems match tourmaline’s dazzling range of colors.

LORE – Ancient Egyptians thought that tourmaline gathered all the colors while traveling along the rainbow. Its name means “a gem of the rainbow”.

Blue sapphire belongs to the mineral species corundum, and ranges in color from pure blue, to greenish blue to violetish blue. The interaction between impurities of iron and titanium cause its color. The name “sapphire” applies to any corundum that’s not red and doesn’t qualify as ruby, another corundum variety. The most preferred and valuable sapphires are deep color saturations known in the trade as “Royal Blue” and the soft velvety blue called “Cornflower Blue.”

LORE – Sapphire has traditionally symbolized sincerity, truth, faithfulness and nobility. It was also reputed to cure plague boils, diseases of the eye and be an antidote to poison.

Coveted by Spanish conquistadors, Inca kings, Mughals and pharaohs, emerald is the bluish green to green variety of beryl. Trace elements that cause emerald’s color include chromium and vanadium. As a general rule, the higher the chromium, or vanadium content, the more intense the green. The most desirable emerald colors are bluish green to pure green with strong to vivid color saturation and medium to medium-dark tone.

Diamond is the only gem made of a single element – typically about 99.95 percent carbon. The other 0.05 percent can include one or more trace elements, which can influence its color or crystal shape. Diamond forms under high temperature and pressure that exists only within a specific depth range (about 100 miles or 160 kilometers) beneath the earth’s surface.

LORE – Known as one of the universal symbols of love, diamond is cherished around the world.

Turquoise is found in only a few places on Earth, typically in dry and barren regions. It is formed where acidic, copper-rich groundwater seeps downward through deeply altered or broken rocks where it reacts with minerals that contain phosphorus and aluminum. The result of this process is a porous, semi-translucent to opaque hydrous phosphate of copper and aluminum.

LORE – The Apache thought turquoise could be found by following a rainbow to its end. The Pueblo believed that turquoise got its color from the sky, while the Hopi thought the gem was produced by lizards scurrying over the earth.

Sunstone, a member of the feldspar group, can be an orthoclase feldspar or a plagioclase feldspar, depending on chemistr y. Both can show aventurescence – a sparkly, metallic-looking luster caused by flat, reflective inclusions. Although most sunstones have yellow, orange or brown bodycolor, not all sunstones are aventurescent.

LORE – According to Native American legend, a great warrior was wounded by an arrow and bled on a stone. The blood permeated the stone with his spirit, causing sunstone’s color and giving it sacred power.

Called “the king of precious stones,” ruby is the red variety of the mineral corundum. Its color is caused by traces of chromium. The most sought-after color by collectors is a deep red with a hint of purple, called “pigeon’s blood” by those in the gem and jewelry industry. Myanmar (formerly Burma) is home to the most famous ruby mines. Other major sources include Vietnam, Madagascar, Mozambique, Kenya, Tajikistan, Afghanistan and Pakistan.

LORE – Early cultures valued rubies for their similarity to the redness of blood, and believed it held the power of life. Many medieval Europeans wore rubies to guarantee health, wealth, wisdom and success in life.

Coveted for thousands of years as symbols of wealth and status, pearl s are formed when a microscopic irritant enters the bodies of certain species of mollusks. There are two t ypes of pearls: natural (formed without human inter vention); and cultured (the product of human intervention). Natural pearls are exceptionally rare. There are four types of cultured pearls: akoya, Tahitian, South Sea and freshwater.

LORE – Ancients from the Middle East believed that pearls were teardrops fallen from heaven. Christopher Columbus and his contemporaries thought that mollusks formed pearls from dew drops.

The Field Museum of Natural History, Chicago, Illinois
Magnificent gemstones, minerals and jewelry from around the world will delight you at the Field Museum. The exhibits in the Grainger Hall of Gems show the transformation of gemstone rough into jewelry.
fieldmuseum.org
T +1 312 922 9410

Smithsonian Natural Museum of History, Washington, D.C.
Waiting for you is the Hope Diamond and the 10,363 carat Dom Pedro aquamarine. After viewing those wonders, you can wander around over 20,000 square feet of the Janet Annenberg Hooker Hall of Geology, Gems, and Minerals permanent exhibit.
naturalhistory.si.edu
T +1 202 633 1000
E info@si.edu

Gemological Institute of America® (GIA), Carlsbad, California
GIA® in Carlsbad is one of the world’s great gemological research facilities and grading centers – and it’s also a stunning gem and jewelry museum. Exhibits include Riches in the Rocks, trilliant-cut gems and Symphony in Gemstones. Check the website for special exhibits including Centuries of Opulence: Jewels of India through October 2018. Call 24 hours in advance to schedule a tour.
GIA.edu
T +1 800 421 7250, ext. 4116
E guestservices@gia.edu

Mineral & Gemological Collection at Harvard University Cambridge, Massachusetts
Harvard’s museum is home to more than 3,000 specimens. The collection has 1,200 gems from New England allowing you to take a gemological tour of the region within their galleries.
mgmh.fas.harvard.edu
T +1 617 495 3045
E hmnh@hmnh.harvard.edu

Perot Museum of Nature and Science, Dallas, Texas
A museum you and your children will be sure to love. In the Lyda Hill Gems and Minerals Hall, you’ll find The Eye of Africa, (a spectacularly vivid fluorite crystal from Nambia) and a five-foot-tall amethyst geode. The entire family can participate in a scavenger hunt.
perotmuseum.org
T +1 214 428 5555 E info@perotmuseum.org

The Amber Room by Steve Barry – A room with amber walls disappears when the Allies start bombing Nazi Germany. This historical event serves as the setting for a riveting detective novel. Will Rachel Cutler rediscover one of the world’s great lost treasures?
Adult Mystery/Historical (Fiction)

Priceless by Marne Davis Kellogg – Kick Keswick runs a prestigious auction house and is a master jewel thief. She changes her ways after a marriage to a Scotland Yard detective, only to discover that a new thief has stolen her signature techniques.
Adult Suspense/Mystery (Fiction)

Straight by Dick Francis – What happens when a jockey inherits his brother’s jewelry business…and enemies? Award-winning novelist Dick Francis spins a page-turning tale that you won’t be able to put down.
Adult Mystery/Thriller (Fiction)

Star Sapphire and Land of Gems series by Anthony Pardoe – Star Sapphire (a courageous 10-year-old girl) and Jasper Pebble (a talking gem) make their way through a fantastical universe of gems bubbling with personalities – and agendas. The award-winning novels entertain, educate and evoke comparisons to Alice in Wonderland.
Children 8-12 years (Fiction)

Smithsonian Handbooks: Gemstones by Cally Hall – An encyclopedia, Gemstones is packed with essential information and stunning photography on 130+ varieties. Comprehensive descriptions of a gem’s distinguishing characteristics and quick reference guides make this a handy resource.
All Ages – Beginners to serious enthusiasts (Non-Fiction)

Oceanview Mine
San Diego County, California
Screen for tourmaline, kunzite, morganite and other gems and minerals by sifting through material from the mine’s commercial operation. Jeep tours of active mining areas are also available. You can even take home a five-gallon bucket of rocks to screen at home. Reservations required.
oceanviewmine.com
T +1 760 415 9143
E digforgems@gmail.com

Royal Peacock Opal Mine
Denio, Nevada
Nevada is known as a significant source of black opals, and the Royal Peacock mine is a large producer of the gem. Guests can sift through unearthed materials (tailings) or dig into the undisturbed hillside. Tool rental is available. Open seasonally.
royalpeacock.com
T +1 773 941 0374
E autumn@royalpeacock.com

Crater of Diamonds State Park
Murfreesboro, Arkansas
Hunt for diamonds over the eroded surface of a diamond-bearing volcanic crater. There are three ways to search: surface searching (walking and looking); shallow digging; and digging deep holes and hand-sorting the gravel. Bring your own tools or rent them on-site. You might get lucky: 7.44 carat and 2.78 carat diamonds were unearthed in 2017. You might also find amethyst, garnet,jasper, agate and quartz.
craterofdiamondsstatepark.com
T +1 888 287 2757
E info@ArkansasStateParks.com

Emerald Hollow Mine
Hiddenite, North Carolina
The Emerald Hollow Mine states it’s the world’s only emerald mine open for public prospecting. Gems found at the site include emerald, aquamarine, sapphire, garnet, topaz, amethyst, citrine, rutile and tourmaline. Prices depend on the type of digging you want to do.
emeraldhollowmine.com
T +1 828 635 1126
E info@emeraldhollowmine.com

This information is provided for educational purposes only. Please do your own research and contact businesses before visiting. Gemstone images are for illustrative purposes and may not originate in the state where they are shown. GIA makes no claims as to the completeness, accuracy, validity or content of any data presented here and makes no endorsements, recommendations, representations or warranties, express or implied, including without limitation the warranties of merchantability, non-infringement or fitness for a particular purpose.

John Woodmark provides an update on the Ponderosa sunstone mine in Oregon.
Read More

A look at the 2016 sapphire production from Montana’s Rock Creek deposit.
Read More