John Woodmark, president of Desert Sun Mining & Gems (Depoe Bay, Oregon), provided an update on the Ponderosa mine. According to Woodmark, the mine is Oregon’s most prolific sunstone source, producing about 95% of all material currently on the market. He explained that the mine’s operations have changed to compensate for the characteristically short May-to-October mining season at the Ponderosa, which is at an elevation of 6,000 feet. In September 2015, Woodmark contracted with a sand and gravel company to bring a much larger excavator on site along with a high-capacity screen. This allowed the operators to stockpile a large enough volume of concentrate to sustain production through the entire following season.

News from the Ponderosa Mine
John Woodmark provides a status report of activities at Oregon’s Ponderosa mine.

In years past, even though the miners had access to the site as soon as the snow cleared in mid-May, they had to wait for the ground to dry out before they could mine. Now they can process the prior year’s stockpiled concentrate through a wet trammel—which removes some of the volcanic crust on the rough feldspar—and pickers can start work immediately. The new process ensures more production: During the five-month 2017 season, Ponderosa produced 4,400 kg of rough labradorite feldspar.

In September 2017, the combination of the bigger excavator and the high-capacity screen produced approximately 5,000 cubic yards of concentrate in just under a month. Woodmark estimated that the concentrate contains 5 kg of Oregon sunstone per cubic yard, and the new process has dramatically increased production of Ponderosa sunstone. 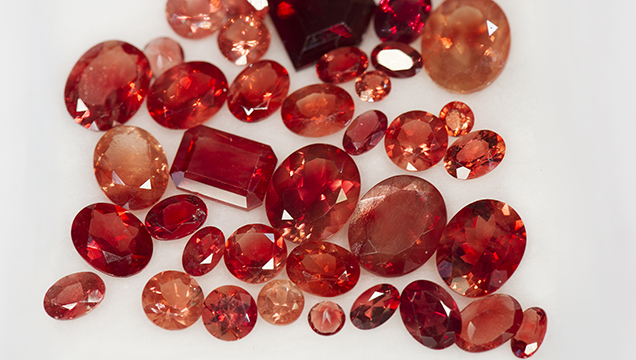 Another development has been extensive test digging to determine gem potential over Desert Sun’s existing 60-acre claim. Woodmark explained that these test digs located a promising area of approximately one quarter of an acre, which has been developed into an open pit about 50 feet deep. Woodmark’s miners are finding larger stones as they go deeper, including one that weighed approximately 1,800 ct (figure 1). In addition, many of these larger gems are red/green dichroic stones, along with approximately 18 kg of extremely rare fine red and orangy red material (figure 2).

Woodmark has streamlined the company’s operations in other ways. He now contracts with a cutting house in India that grades the rough gems into categories. This frees Woodmark’s team from having to grade and allows them to focus on mining and production. It also allows the cutting company to respond more quickly to customers’ requests for a particular color or grade of finished gems. According to Woodmark, this development helps manufacturers use sunstone more effectively. He mentioned that sales have increased year-on-year since the andesine controversy earlier in the decade as trust in the natural-color Oregon gem has increased. He noted that 2017 was the company’s most successful year to date.

Woodmark noted that sustained production has been a major factor in this renewed confidence. He also told us that recent interest in North American gemstones, especially among TV merchandisers, has driven sales. He says that when clients see the quality of an untreated red Oregon sunstone and compare the pricing for a one-carat stone to that of an equivalent-color ruby or spinel, they realize the $150-per-carat price tag is an absolute bargain.

Woodmark added that consumer concern about the integrity of the gem supply chain has fostered interest in domestic gems. People are looking for gems that can be followed “from the dirt to the finger." 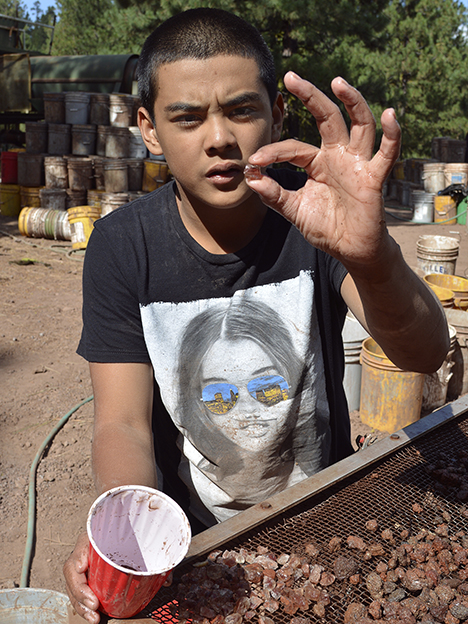 Desert Sun Mining & Gems hires local Native American teenagers to help pick the sunstones from the processed ore (figure 3), which helps the local community. Woodmark explained that each picker can typically produce between 10 and 11 kg per day, but some might pick as much as 17 kg. He mentioned that the company had recently raised the pickers’ hourly wage by 20%, citing the community unemployment rate of 87%. He told us, “They’re always available…and they’re good kids.”

Woodmark told us the operation had recently hosted a PhD geoscience student from Washington State University who was studying the volcanism of the area. The student determined that the flow that hosts the sunstone at Ponderosa is approximately 18 million years old, and that the mine sits atop a vent, which is why those searching for similar deposits nearby have yet to find anything. As Woodmark said, “It just came up, and we’re right on it.” He added that the deposit “looks inexhaustible. From the bores that we’ve done, we have over a trillion carats.”

An review of the Oregon sunstone seen at the Tucson gem shows.