The name of this, the traditional October birthstone, is believed to have originated in India (the source of the first opals brought to the Western world), where in Sanskrit it was called upala, a “precious stone." .” In ancient Rome, this became opalus. Most opals are valued for their shifting colors in rainbow hues – a phenomenon known as “play-of-color.”

The October birthstone’s dramatic play-of-color has inspired writers to compare it to fireworks, galaxies and volcanoes. Bedouins  once believed opal held lightning and fell from the sky during thunderstorms. Ancient Greeks thought opals bestowed the gift of prophesy and protection from disease. Europeans long maintained opal to be a symbol of purity, hope and truth. Hundreds of years ago, opal was believed to embody the virtues and powers of all colored stones.

Opal is also the stone given to celebrate the 14th wedding anniversary. 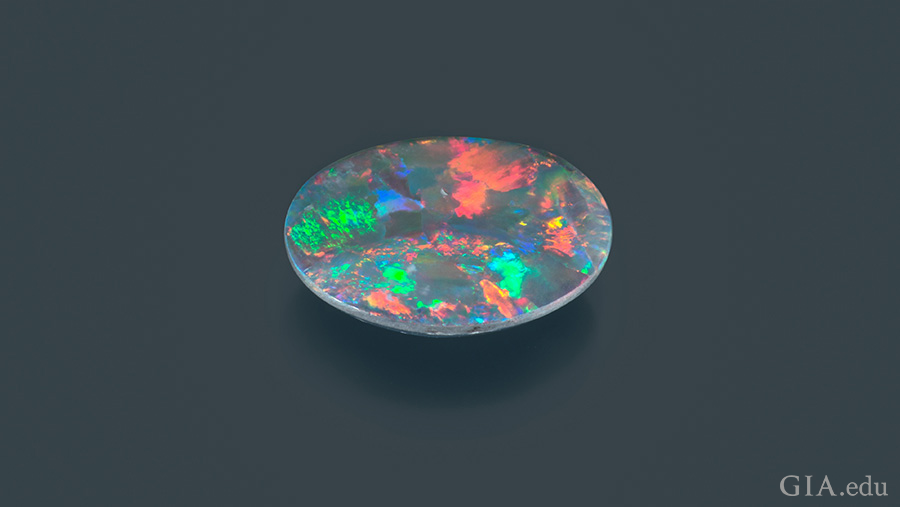 A breathtaking sunset seems to dance on the surface of this 1.72 carat (ct) opal. Photo: Dr. Edward J. Gübelin/GIA

Where Is Opal Found?

The opal birthstone can be found in many places. The fields of Australia are the most productive in the world for the October birthstone. Ethiopia, Mexico and Brazil are also important sources. Additional deposits have been found in Central Europe, Honduras, Indonesia, Madagascar, Peru, Turkey and the United States.

Lightning Ridge, a small town in New South Wales, Australia, is famed for producing prized black opal. A dry and rocky region softened only by small trees and scrub brush, Lightning Ridge gets little rain and bakes in the scorching summer temperatures. The climate is so unforgiving that miners often live underground to find respite from the punishing heat. 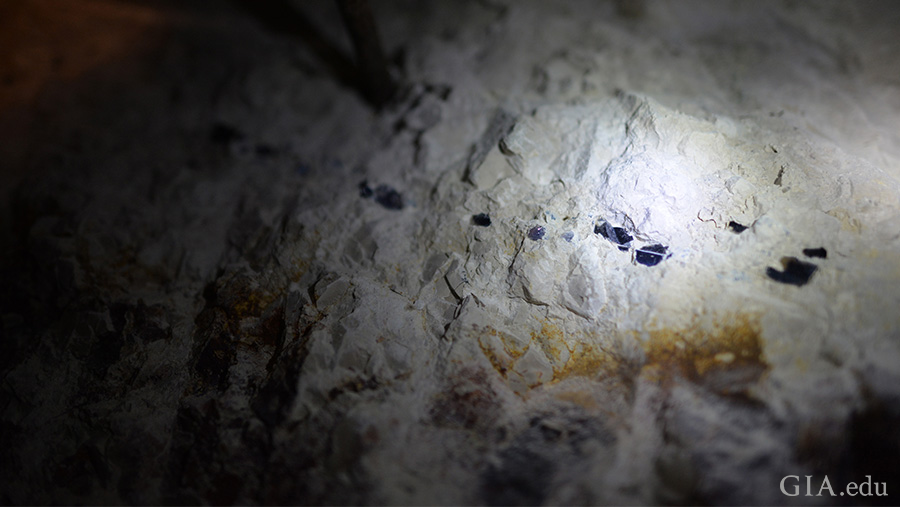 Black opal nodules are sometimes found in a line, as you can see in this photo from the Lightning Ridge mine. Photo: Vincent Pardieu

Australia is also a source of other types of the October birthstone. White opal is found in the White Cliffs area of New South Wales, as well as in Mintabie, Andamooka and Coober Pedy in South Australia. Boulder opal, which comes from only one location in the world, is mined in Queensland. 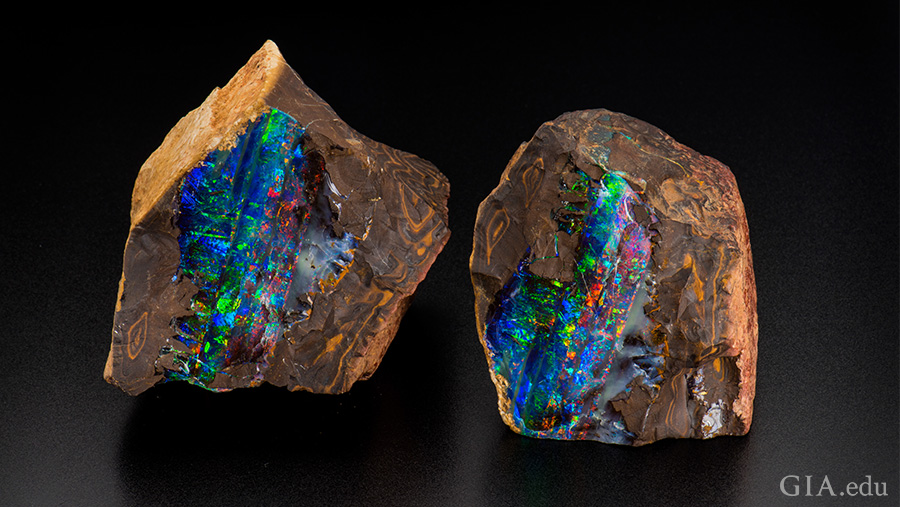 Two pieces of boulder opal that is found only in Queensland. Photo: Robert Weldon/GIA

In Ethiopia, the October birthstone is found near the village of Wegel Tena, in Wollo Province. Travel 340 miles (about 550 kilometers) north of the capital Addis Ababa and up 8,000 feet (2,400 meters), where miners pry opal from shafts dug into the side of a plateau. Gems unearthed here range in body color from white, yellow, orange and brownish red to “chocolate” brown. Some of the opals show play-of-color. Another mine, in Ethiopia’s Shewa Province, yields the coveted black opal, as well as orange, white and crystal opal. Its treasures are buried in steep cliffs that tower over the landscape.

Querétero, a state in Mexico, is known for producing fire opal in yellow, orange and reddish orange to red, some with good play-of-color. The mines are a tourist destination, and getting to them requires taking a dirt road through dense forests of pine and oak, past scrubby plateaus of cacti and shrubs, and up winding mountain roads.

Opal may be treated by impregnation with oil, wax or plastic. Opal doublets or triplets are fine slices of opal glued to a base material and covered with a thin dome of clear quartz. The safest way to clean this October birthstone is with warm, soapy water. Other cleaning methods might damage the opal or filler material. Note that prolonged exposure to water may weaken the adhesive in opal doublets and triplets. Even natural opal can fracture if exposed to high heat or sudden temperature changes.

This October birthstone ranges from 5 to 6.5 on the Mohs scale of hardness. To prevent jewelry set with harder gems from scratching opal, store it by itself. Diamonds, rubies, sapphires, and emeralds are just a few of the gems that can scratch the October birthstone. 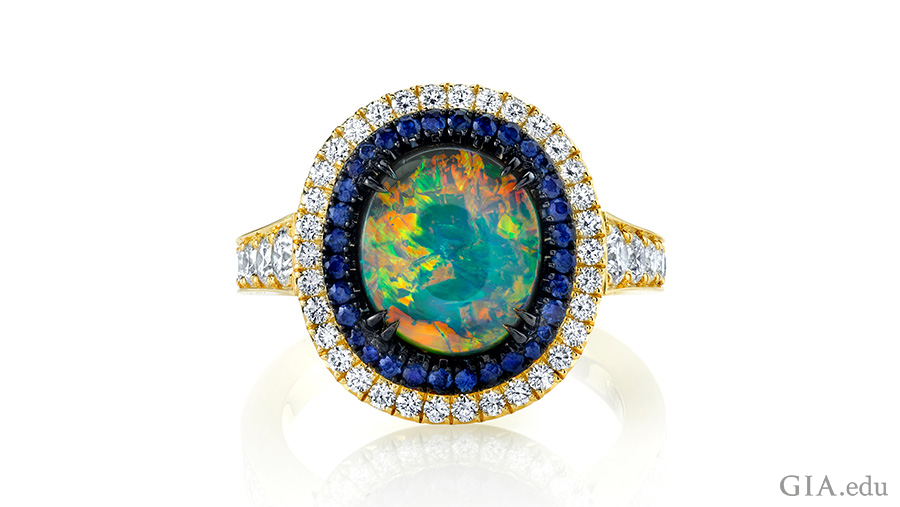 Tourmaline is the newer October birthstone. The name comes from the Sinhalese word toramalli, which means “stone with mixed colors,” because it often has multiple colors in one crystal. Very few gems match tourmaline’s dazzling array of colors. Perhaps this is why ancient mystics believed this October birthstone could inspire artistic expression – it has a color palette for every mood. Among the most popular are the pink and red rubellites, the emerald green “chrome” tourmalines, and the neon green and blue-to-violet “paraíba” tourmalines.

Because of its vast range of colors, tourmaline was often mistaken for other gemstones  One of the “rubies” in the Russian crown jewels, the “Caesar’s Ruby” pendant, is actually red (rubellite) tourmaline. A Spanish conquistador found green tourmaline crystals in Brazil in the 1500s and confused the stones with emerald. These and other cases of mistaken identity continued for centuries until scientists recognized tourmaline as a distinct mineral species in the 1800s. 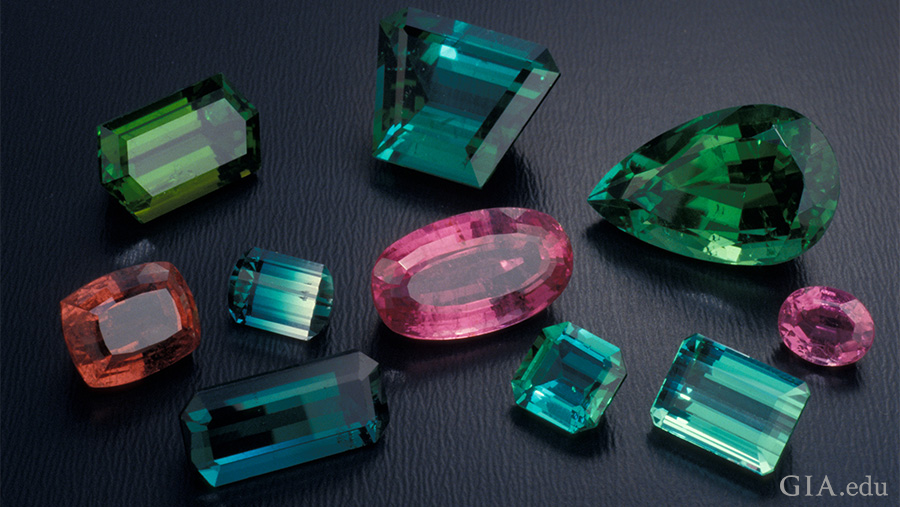 Different colors of tourmaline are thought to have their own healing properties. Black tourmaline is believed to protect the wearer and give a sense of self-confidence. Pink tourmaline embodies love and is associated with compassion and gentleness. Green tourmaline promotes courage, strength and stamina. Tourmaline is given to celebrate the eighth wedding anniversary.

Where Is Tourmaline Found?

This October birthstone is most commonly found in Brazil, but it is also mined in Afghanistan, Pakistan, Kenya, Madagascar and Mozambique (among other countries in Africa). California and Maine are historically important producers of fine tourmaline in the United States. 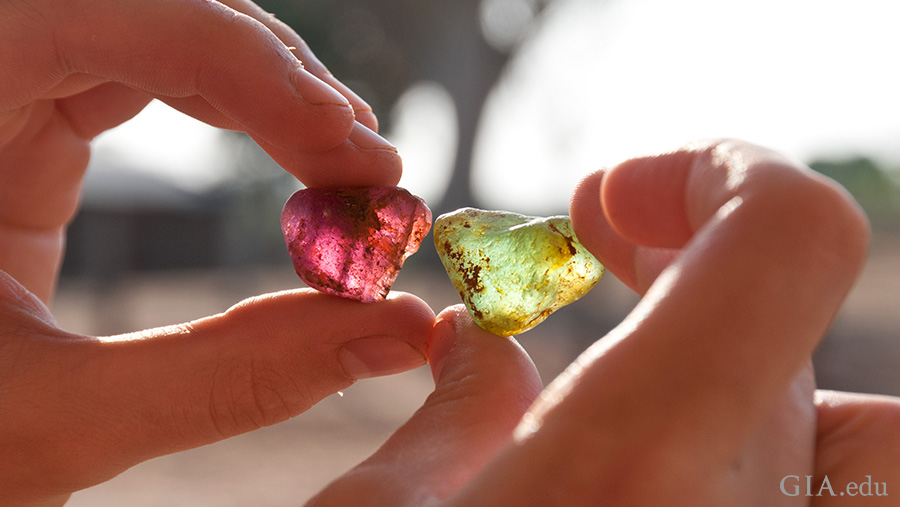 Examining purple and green tourmaline rough while visiting the tourmaline deposit near Mavuco village on a field expedition to Mozambique. Photo: Vincent Pardieu

Most of the tourmaline mined in Brazil over the centuries comes from pegmatites in the state of Minas Gerais. These subterranean intrusions of magma are the source of a virtual kaleidoscope of gem minerals. In the late 1980s, however, electric green, blue and violet tourmalines entered the gem market from pegmatites in Brazil’s Paraíba State. Scientists found that the intense colors were caused by trace amounts of copper, which had previously not been recorded as a coloring agent in any other tourmaline. In the early 2000s, Paraíba-type copper-bearing tourmalines were also discovered in Mozambique and Nigeria. Overall, prices for the best Paraíba and Paraíba-type tourmalines easily surpass other tourmalines due to their vivid hues, higher color saturation and greater rarity. 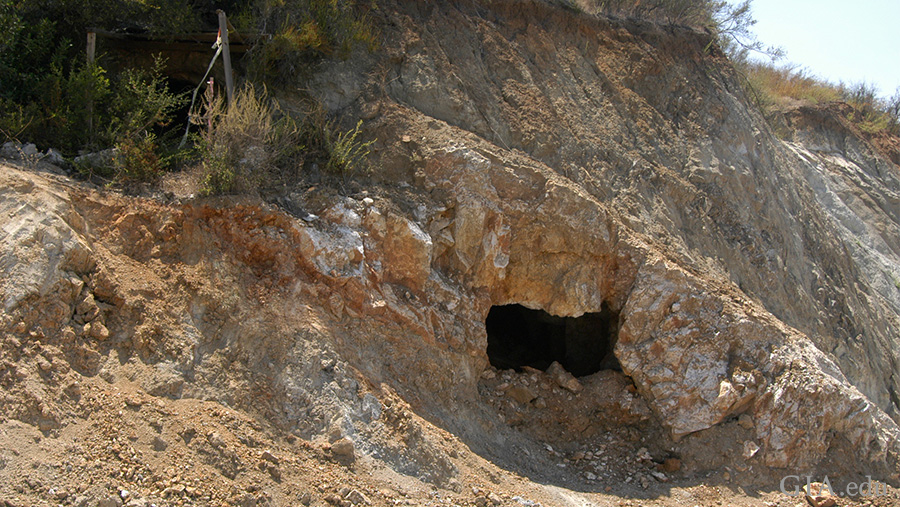 In the United States, both Southern California and Maine host several pegmatite districts. For more than a century, they have sporadically yielded large quantities of tourmaline.

Maine’s first major tourmaline deposit was discovered in 1820 at Mount Mica in Paris, by two young boys exploring the local area. Even today, a quarry at Mount Mica intermittently produces various colors of gem tourmaline. The Dunton mine, near Plumbago Mountain, is the most prolific producer of tourmaline in Maine.

In 1898, California’s first commercial tourmaline mine opened at the Himalaya pegmatite in the Mesa Grande district – famed for the production of fine rubellite. To feed Empress Dowager Cixi’s obsession with the vibrant color, San Diego mines sent 120 tons of gem rubellite to Imperial China between 1902 and 1910. With the death of Cixi in 1908 and the subsequent overthrow of the Qing dynasty, the heyday of tourmaline mining in California ended. Today, only a few mines in San Diego County occasionally produce gem-quality tourmaline.

The tourmaline birthstone is rated 7 to 7.5 on the Mohs scale of hardness and is generally suitable for everyday wear. These colorful gems are usually stable enough to withstand light and most chemicals, but heat can be damaging. This October birthstone is best cleaned with warm, soapy water and a soft brush The use of ultrasonic and steam cleaners is not recommended. 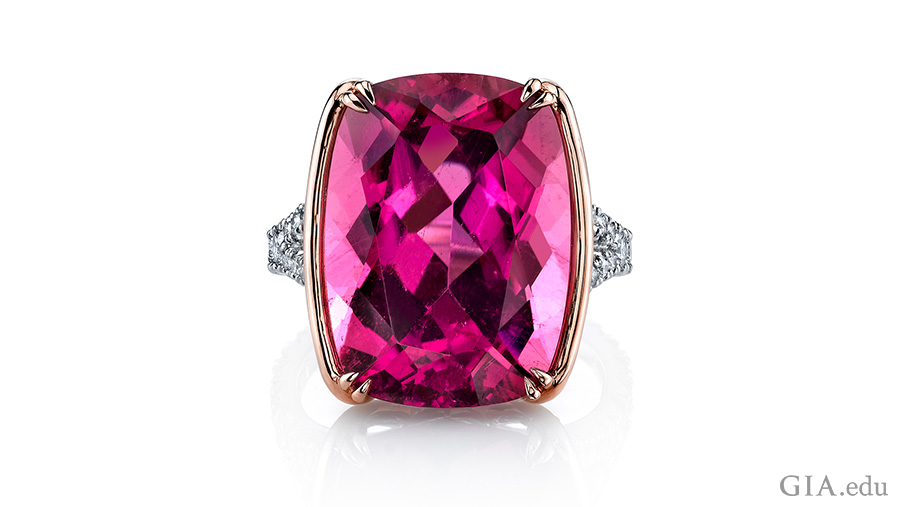