The diamond industry experienced a slow-growth economic recovery in 2016 and the coloured gemstone trade received a welcome shot in the arm − despite a politically turbulent year.

Luxury brands worldwide experienced a second slow year in a row and, in the U.S., the world’s largest market, jewellery demand fluctuated between anaemic growth and slight declines as the fractious presidential election took its toll on the national mood. Consumers in China, the world’s second-largest retail market, continued to cut back on luxuries, sending the country’s major jewellers into a second year of double-digit sales declines. Currency chaos in India sapped demand at the year’s end.

These mixed signals leave no clear indicators for the state of business in 2017.

The diamond industry was in chaos coming into 2016. The sharp cut-back in rough sales by De Beers, Alrosa and other producers in 2015 helped to reduce an estimated eight-month stock overhang that weakened prices and sapped profits. Rough prices were well above comparable polished prices in most cases and diamond manufacturers, who saw their credit lines slashed by 30% or more, refused most of their allocations from De Beers and Alrosa.

Both De Beers and Alrosa trimmed the prices of their contracted sales (an average of 5% and 15%, respectively) at the beginning of the year and other producers followed suit. The recovery was surprisingly swift and manufacturing became profitable again for many firms.

By the end of 2016, the major mining companies were turning in good numbers. De Beers was estimated to close the year with rough sales estimated between $5.6 billion (£4.6 billion) and $5.8 billion (£4.8 billion), representing a nearly 30-35% increase from a turbulent 2015, despite lowering its rough prices. Alrosa’s sales climbed 48% (to $3.98 billion/£3.27 billion) during the first three quarters of 2016 and were expected to keep that pace until the end of the year. Rio Tinto’s sales were expected to be 3-5% ahead of 2015.

These numbers, however, were not good enough to save De Beers’ Snap Lake mine in Northern Canada, which the company plans to flood this year after several years of unprofitable operation. In addition, Rio Tinto walked away from the promising Bunder diamond mining project in India before development began.

Banks continued to tighten credit terms on the diamond industry in 2016, with the result that some large operations were placed on financial life support. Credit will remain difficult to acquire going into 2017 and is likely remain so for the foreseeable future.

Dramatic increases in rough sales were not fully matched by rising demand, so stock levels began to climb after the spring season, prompting leading lender ABN AMRO to issue a warning that they may reach unsustainable heights. As a result, De Beers and Alrosa will probably remain cautious in their sales during the first quarter.

After a five-year hiatus, generic diamond advertising was revived in the U.S. The Diamond Producers Association, a group of the world’s seven largest diamond-mining companies, which included De Beers, launched the $12 million (£10 million) programme in October using the slogan “Real is Rare”.

The campaign, which was presented on various social media channels and TV, shows young couples in clubs and resorts, continuing the relationship-oriented campaigns of the De Beers “Forever” advertising of the past. There are differences between the old and new campaigns, however. The old De Beers ads specifically targeted engagements and wedding anniversaries. The “Real is Rare” campaign is less about formality and traditional rules in today’s relationships and adds the implication that natural diamonds will remain more desirable than synthetics.

Synthetic diamonds broke into the news early in the year with the creation of the Diamond Foundry, a new venture funded in part by actor Leonard Di Caprio. The start-up began test-marketing its lab-grown diamonds through four distributors and is working on a production facility it plans to open at the end of 2017.

While colourless synthetic diamonds remained a small part of diamond sales in 2016, producers and sellers of those goods are increasing their marketing efforts and sales channels, so sales will probably grow in 2017. 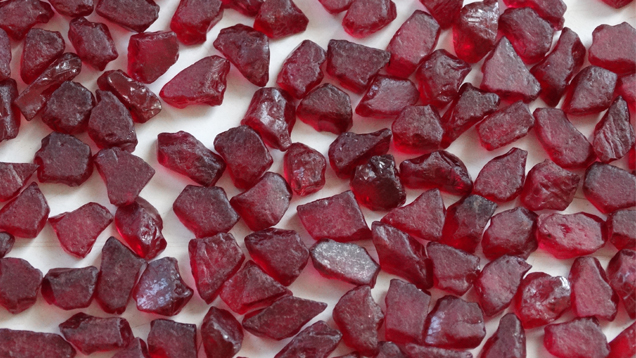 President Obama removed the eight-year-old sanctions on Myanmar in the autumn, allowing rubies from that country – the world’s major source – to legally be traded again. While some retailers and wholesalers ignored the sanctions, most U.S. major retailers did not carry ruby pieces while they were in place. Although Mozambique ruby had helped to fill the supply gap over the past two years, some retailers and jewellery designers had worried that a cloud of suspicion hung over the gem, regardless of its source, because of its association with Myanmar.

The ban was less effective at the top end of the market, where dealers at U.S. trade shows continued to openly display and promote “pigeon blood” Burmese rubies.

The effect of the sanctions being lifted may not be felt in consumer markets until later this year because gem dealers need time to re-establish supply lines.

The Responsible Jewellery Council (RJC) announced in March that it will begin to certify coloured stone producers in 2017. The move came after five years of discussions with various players in the trade. The RJC has 900 member firms in the diamond, jewellery and watch sectors of the industry.

The retail optimism spurred by the growing U.S. economy did not translate into a sharp upturn in diamond demand through the year. Major retail chains reported uneven sales throughout the year, with slight declines going into the fourth quarter. Most U.S. major retailers will report their seasonal numbers in late January.

Surveys of independent jewellers showed more positive growth, with the majority enjoying sales increases of 5% or more, especially in the upper market.

In China, the largest retail jewellers reported continued double-digit sales declines as the market continues to cool. In Hong Kong, retail sales of jewellery and watches fell 19% through the first 11 months of the year, according to the Hong Kong Census and Statistics Department. Officials in China remain hopeful that 2017 may bring an improvement because the government, recognising the need to spur the economy, is adopting measures to encourage consumer spending.

India’s retail jewellery sales took an immediate hit in November after its government banned 500 rupee bills (worth approximately $7.50/£6) and 1,000 rupee bills (worth about $15/£12) from cash transactions. The goal was to direct more commerce through banks so that the government can keep track of it and reduce the opportunity for corruption, money laundering and tax evasion. A large portion of the population is paid in cash with such notes, however, and does not have bank accounts. Economists estimate that the move will result in sharp cuts in retail sales, including in jewellery, and reduce economic growth by one or two points.

Worldwide luxury sales slumped this year with the slowdown in China and a continued move away from the “bling” look of the past decade.

Exports of Swiss luxury watches declined 11% in the first 11 months of 2016, with the decline accelerating in the autumn. The conditions caused hundreds of layoffs throughout the industry. Executives said they are continuing to adjust to a “new reality” of changing tastes and markets.

The spring 2016 auction season was one for the record books, achieving nearly $800 million (£660 million) in sales between March and July, and featuring the costliest gemstone ever to go under the hammer at a public sale.

Christie’s and Sotheby’s, who control more than 90% of top-end gem and jewellery sales worldwide, broke last year’s record by more than $140 million (£115 million), aided by the Oppenheimer Blue, a GIA-graded Fancy Vivid blue diamond that sold for $57.1 million (£47 million).

The first major stone to sell last year was the 10.10 carat (ct) Fancy Vivid blue De Beers Millennial 4 diamond. The stone was part of De Beers’ famed diamond collection of 10 blue diamonds exhibited at the London Millennium Dome in 2000 that was the target of a bold, but unsuccessful robbery attempt.

The autumn season began slowly with several important diamonds and gemstones going unsold. It was ultimately successful, however, with a number of multi-million-dollar fancy-colour diamonds changing hands, even if the prices did not set records.

The most publicised auction of the year was the 29 June auction of the 1,109 ct Lesedi la Rona diamond, the second largest gem rough ever found. The mining company that found the diamond, Lucara Diamond, offered it in a public sale through Sotheby’s, but it failed to meet its reserve, reportedly set at $82 million (£67 million).

The company said it will offer the diamond for sale again this year in a trade-only transaction that presumably would not include a 12% buyer’s premium.

Is Another 1,000 Carat Diamond Around the Corner?