To find out what it takes to make an NBA championship ring, we interviewed executives at Jostens and Jason of Beverly Hills. Both companies have designed and manufactured these ultimate status symbols for professional players.

The Miami HEAT ring posed a unique design challenge. Recreating the logo – a 0.5 carat diamond basketball swooshing through a net – was particularly difficult, according to Jostens. The ring also had a secret message on the side panel. Underneath the Larry O’Brien trophy are 16 lines made of 14K gold. Head coach Erik Spoelstra brought a trophy into the locker room when the team made the playoffs. He told the players that they needed 16 games to become champions, and each time the team won a game, he put a notch in the trophy. 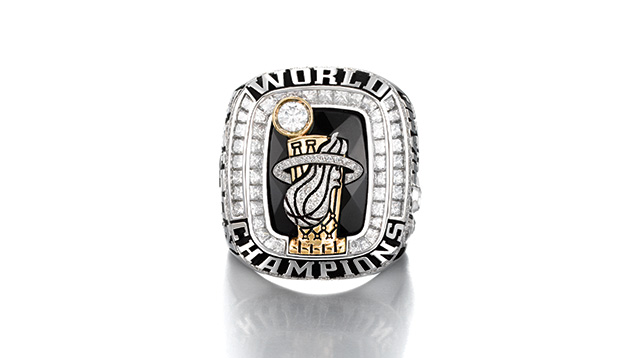 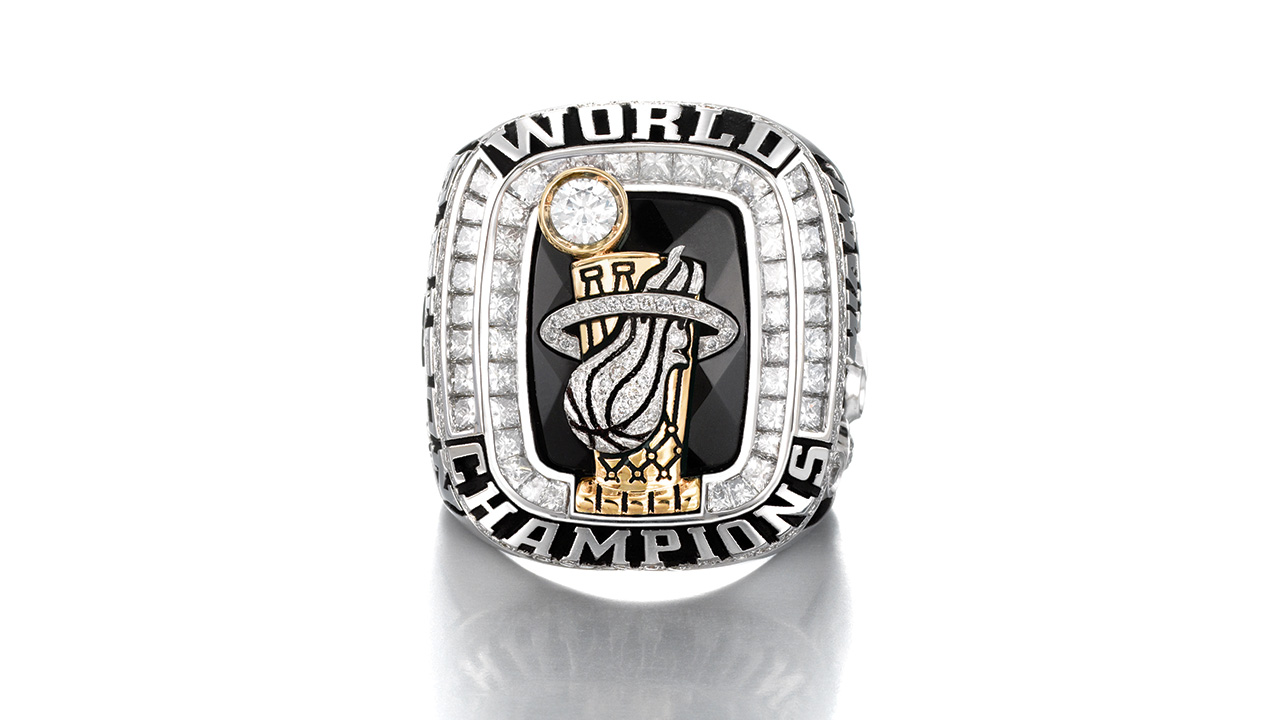 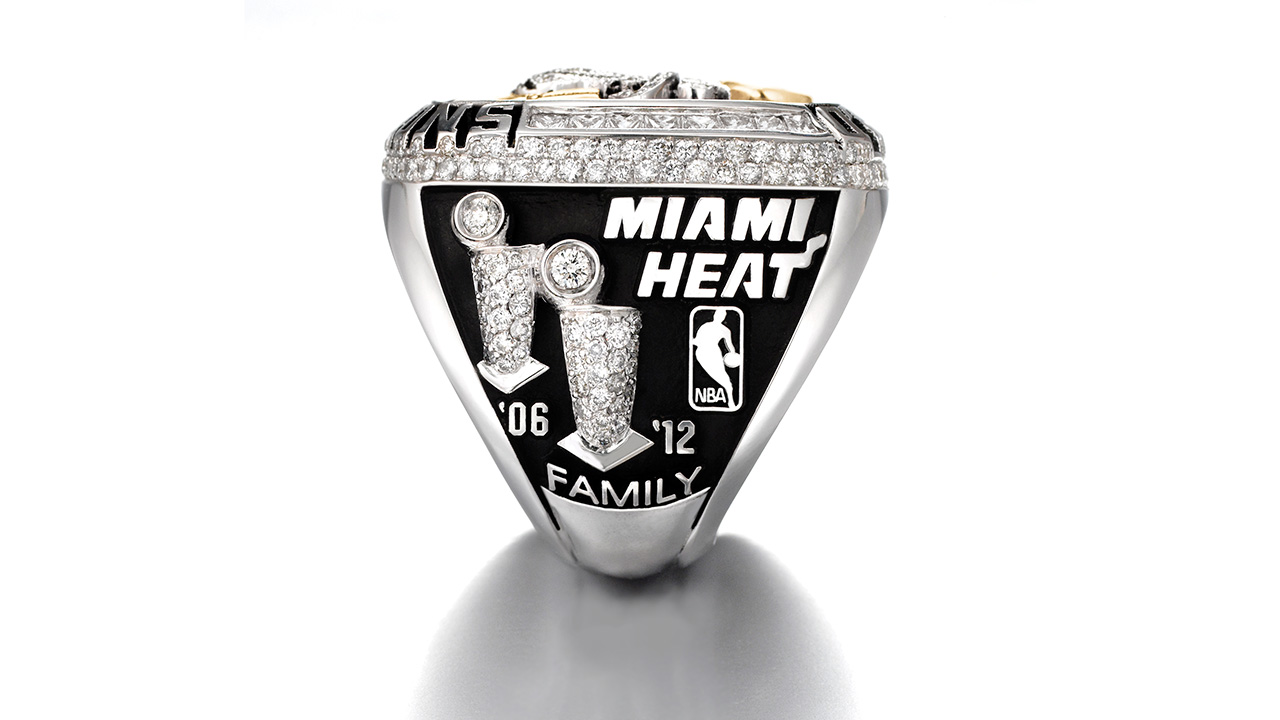 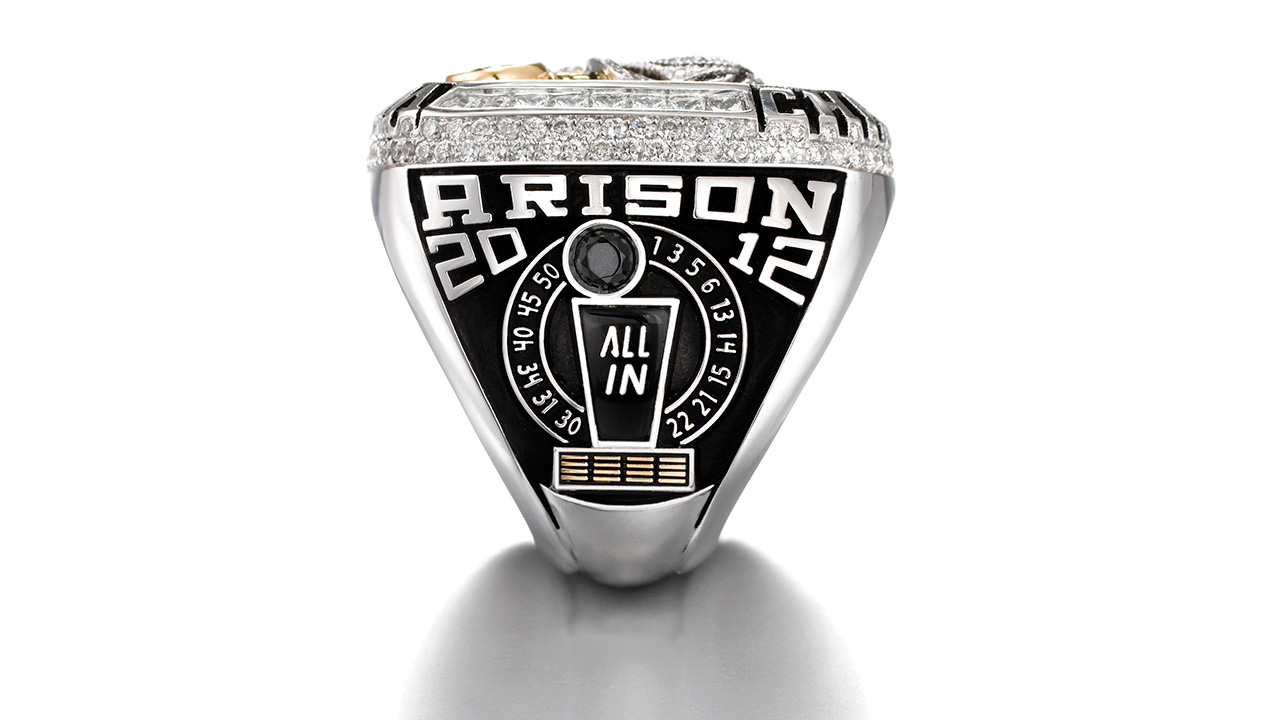 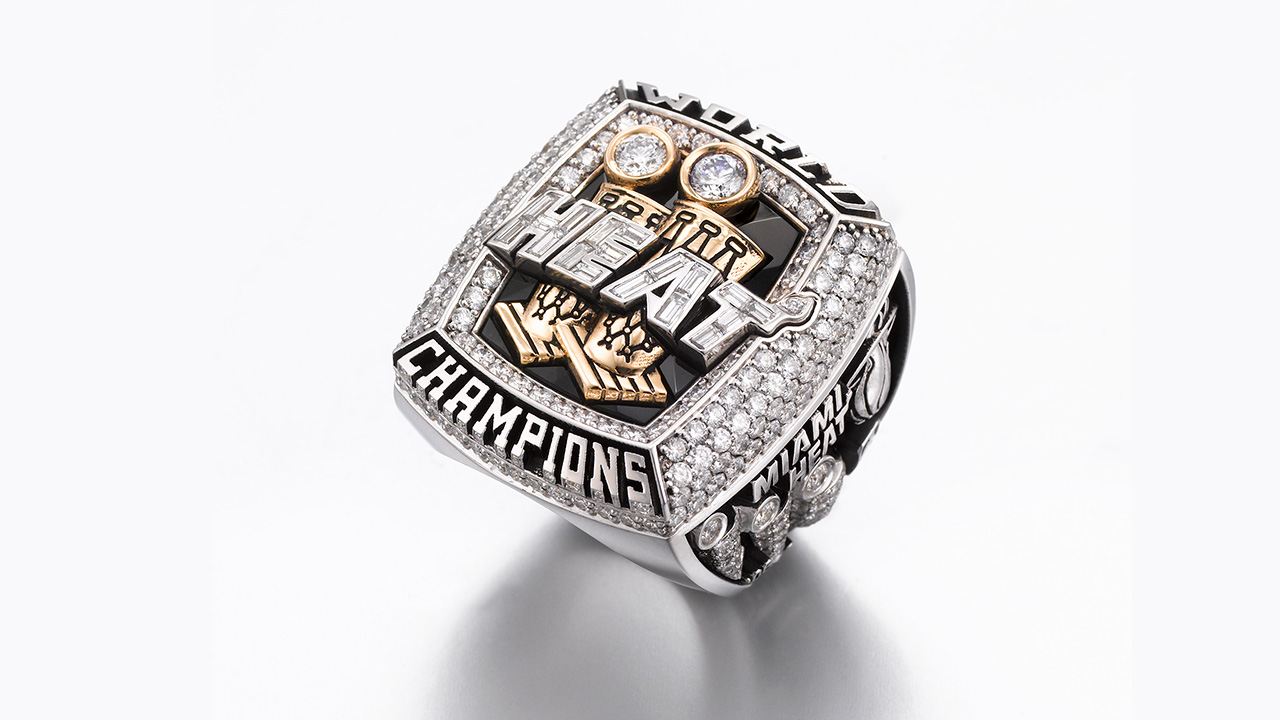 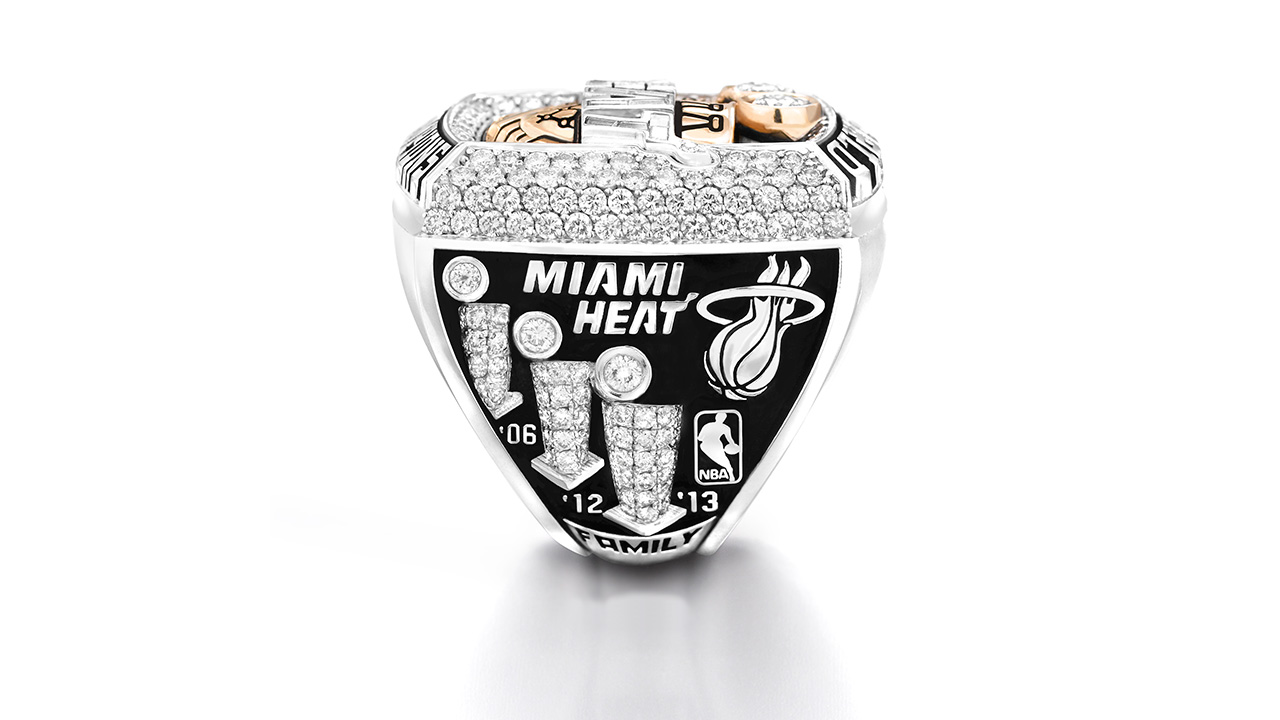 Jason of Beverly Hills has made three NBA Championship rings since 2009. The company most recently crafted the 2014-2015 Golden State Warriors championship ring (Steph Curry proudly wears it), and the 2008-2009 and 2009-2010 rings for the Los Angeles Lakers.

The 240 diamonds in the ring stand for the team’s wins under the current ownership. The circular top is a nod to the shape of the Warriors jersey logo and the shape of a basketball. The custom-made 67% pure gold (approximately 16K) used in the Golden Gate Bridge and the players’ numbers represent the Warrior’s 67 wins in the season. 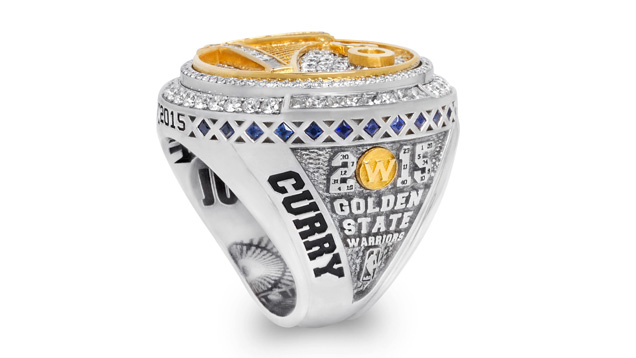 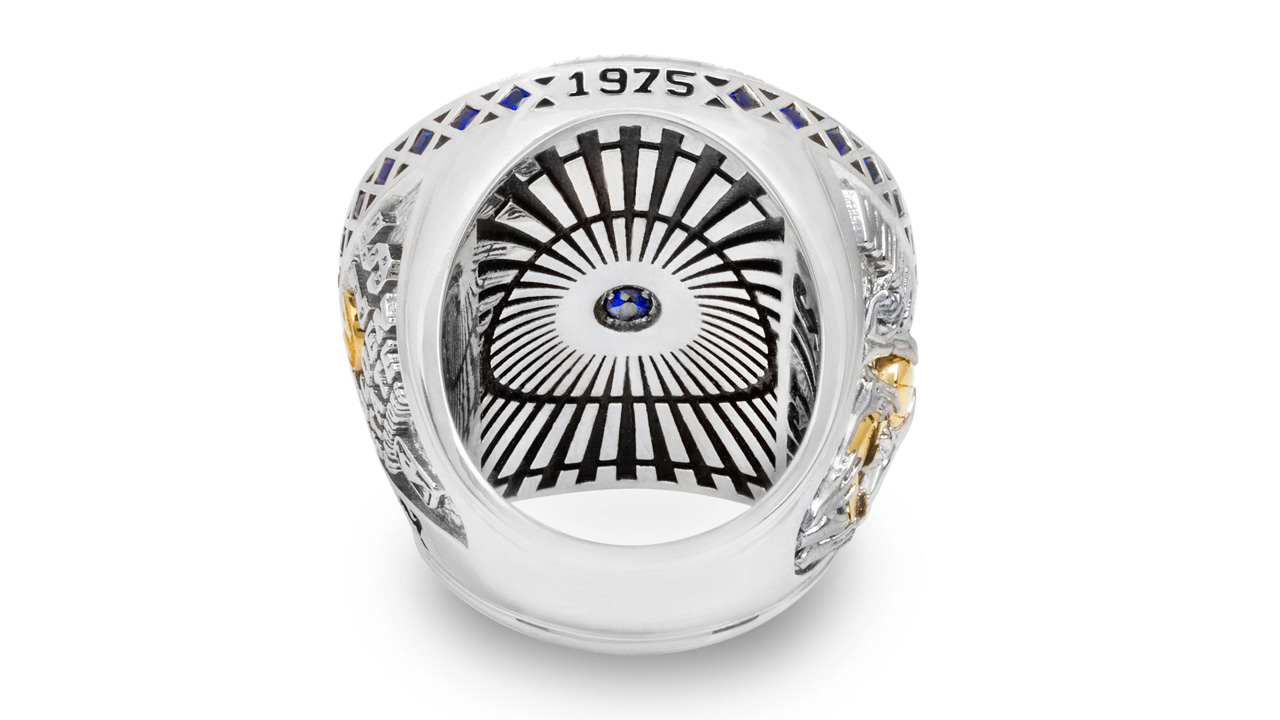 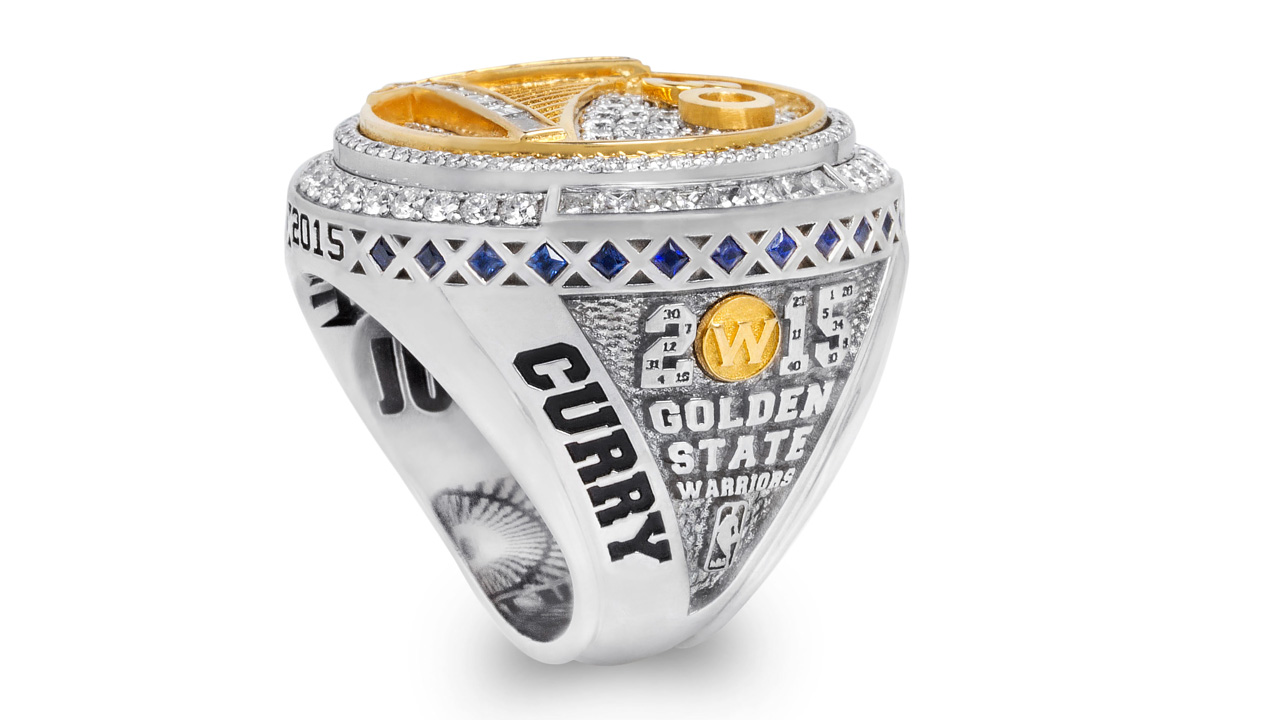 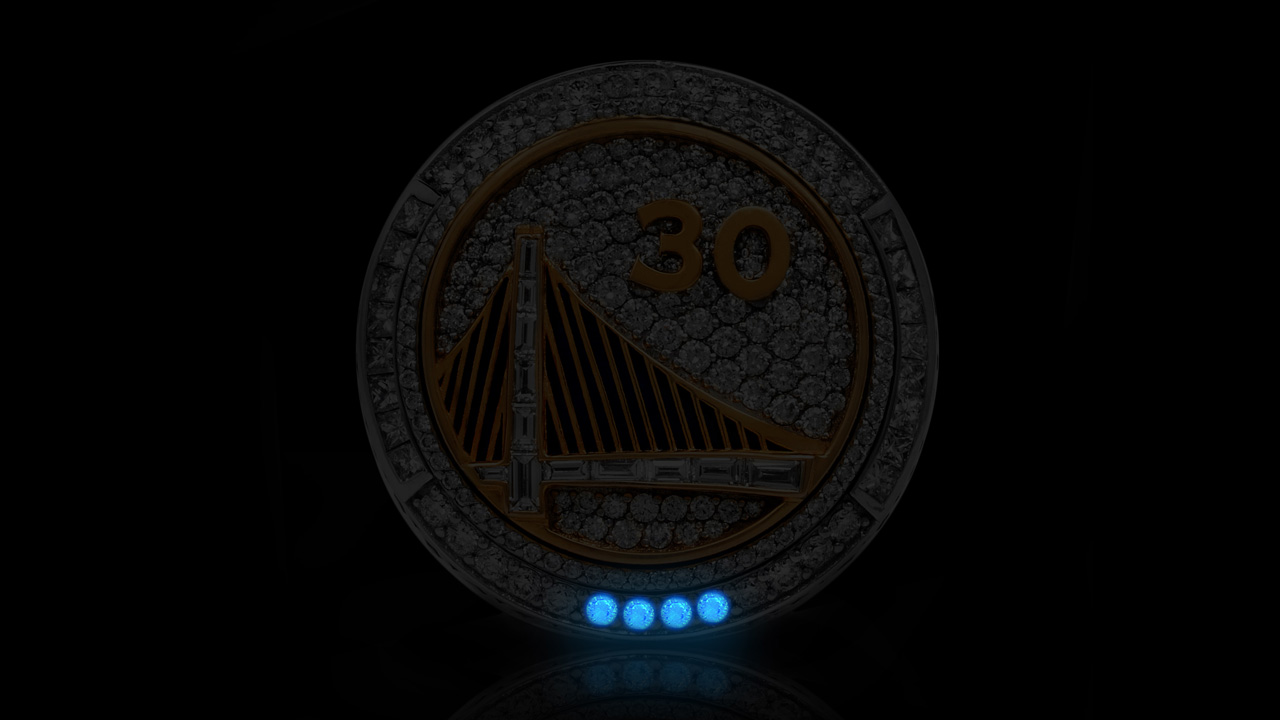 Designing an NBA championship ring is a sprint in creativity and skill. Once the final shot is taken, Jostens and Jason of Beverly Hills rush to beat another buzzer: they will have about four months to design and make the ring, which is presented to the players on opening day of the next season. Designs are shown to the team. The team's owners pick a vendor. A budget is set for the entire project and the amount to be spent on each ring. This varies from team to team.

Jason of Beverly Hills starts designing as soon as the game clock stops. When creating the ring for the Golden State Warriors, its designers hand-sketched a concept that they thought would wow the players. This was made into a 3D CAD model. Jason of Beverly Hills then met with Steph Curry, Draymond Green and Andre Iguodala to refine the design. Owners Joe Lacob and Peter Guber provided additional suggestions. The company integrated all the input, creating a design that captured the identity of the team.

Jostens uses a different approach. When the final four teams face off in the NBA playoffs, its designers create mock-ups for all of them. This way they are ready to present designs – no matter who wins. The Jostens’ design team shows its initial renderings to the winners. Players share pivotal moments and events from the season. The owners tell the vendor what elements they want in the ring. Jostens then returns with final designs about three to four weeks later. The goal is to make the championship story come to life in gold, diamonds and other gemstones.

Crafting the character of a championship season may have been a little easier for Jostens during the 1990s, when the Chicago Bulls won six championships. Jostens designed all these rings, so they knew something about the franchise, its owners and the team. Owner Jerry Reinsdorf and his wife collaborated closely with Bulls star Scotty Pippen to create the design for the 1993 Chicago Bulls NBA championship ring, which Michael Jordan proudly wears. 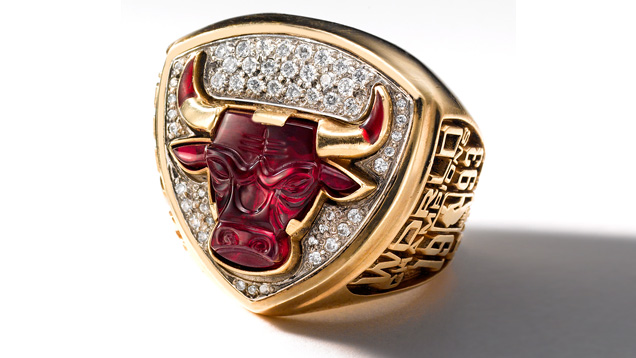 Creating a 3D Bulls logo was a demanding task. It features a man-made red stone that required impressive design skills to make and set. © Jostens, Inc.

When designing the ring, Jostens uses a 13-step process that combines old-world craftsmanship and the latest technologies. Hand sketches are turned into CAD/CAM layouts. Manufacturing is anchored in the lost wax process (a wax model of the ring is encased in material and burned away before molten metal is poured into the cavity), which is used along with 3D printing. Every ring is handcrafted and customised for each wearer. The company believes that this blending of old and new allows them to offer a superior product.

Ring sizes vary, from as small as a size five for a smaller person who works at the franchise, up to 23 for the players. The company has master tools that allow them to create rings of all sizes.

When Jason of Beverly Hills makes the rings, the table for every piece has the same circumference. The ring sizes, however, are scaled for each individual. All rings are made in-house; it takes six to eight weeks to manufacture all of them.

As for gems, Jostens uses natural diamonds, sapphires, rubies and emeralds in its NBA championship rings. Synthetic stones may be used on occasion, either to match the specific Pantone colour of the franchise’s uniform or for gemstones that must be custom cut into complex shapes. The goal, however, is to use a natural gemstone whenever possible.

“We use coloured gems to create the team’s logo and other design elements. This is a relatively new trend in championship rings, which only used to feature diamonds. The rings for the Boston Red Socks and St Louis Cardinals are two recent examples where we used rubies to create the logo,” said Chris Poitras, vice president, sports marketing and development at Jostens.

Jason of Beverly Hills has only used natural stones in the three NBA rings it has created. Gems are sourced from around the world and are typically cut in Canada.

Championship rings have changed over the decades. According to Poitras, “Championship rings have changed from simple symbols of victory to a sophisticated extension of the team’s brand. Since these brands are iconic, the logo, font and important moments are worked into the design, making the finished product a retelling of the team’s path to victory and a reflection of the franchise.”

Turning the ring into a brand extension requires a larger canvas, and that means a larger ring. Bigger athletes have also contributed to ever-increasing ring sizes. The Boston Celtics 1969 NBA championship ring by Jostens is a dramatic example of how they’ve evolved. 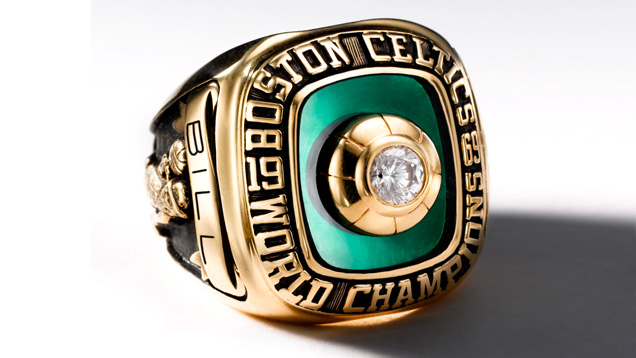 Considered cutting edge at the time because a diamond was set on top of the basketball crest, the Boston Celtics ring features a 0.5 ct diamond set in 10K yellow gold. ©Jostens, Inc.

NBA championship rings are a study in personalisation. A player’s name and jersey number are usually engraved in the shank. The number of gemstones used may represent the number of players on the team bench or a key milestone in the team’s season or history. The team’s motto, the jersey numbers of the players, final scores of important games and other significant details are subtly incorporated into the design. 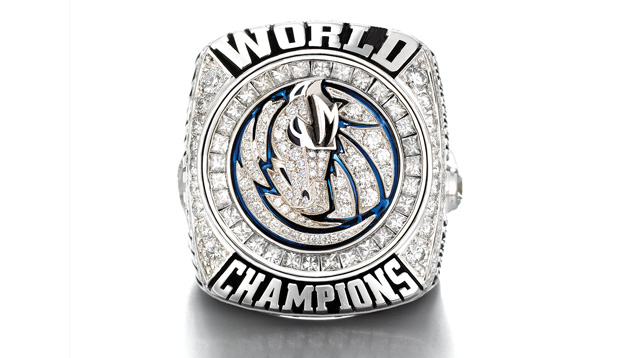 Jostens’ 2011 NBA championship ring for the Dallas Mavericks is an example of this impressive craftsmanship and rich symbolism. Six individual pieces were needed to make the Mavericks’ logo, part of the 14 total ring components. Another 31 custom princess-cut diamonds surround it, representing each year the Dallas Mavericks have been in the NBA. Flush set around the rest of the ring top are round brilliant diamonds.

Designing the ring was an impressive dash to the finish line. An NBA work stoppage prevented Jostens from talking to the players to get their input on the design. When they finally could, the company had just 17 days to design the ring. 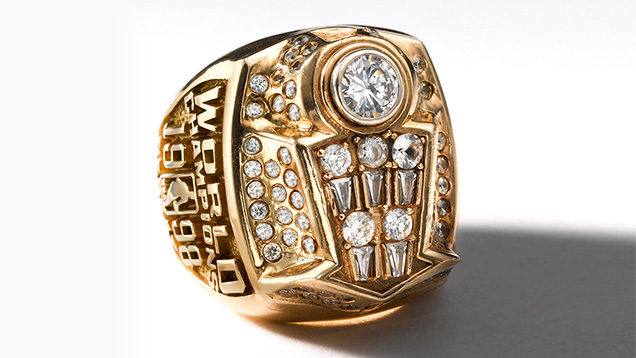 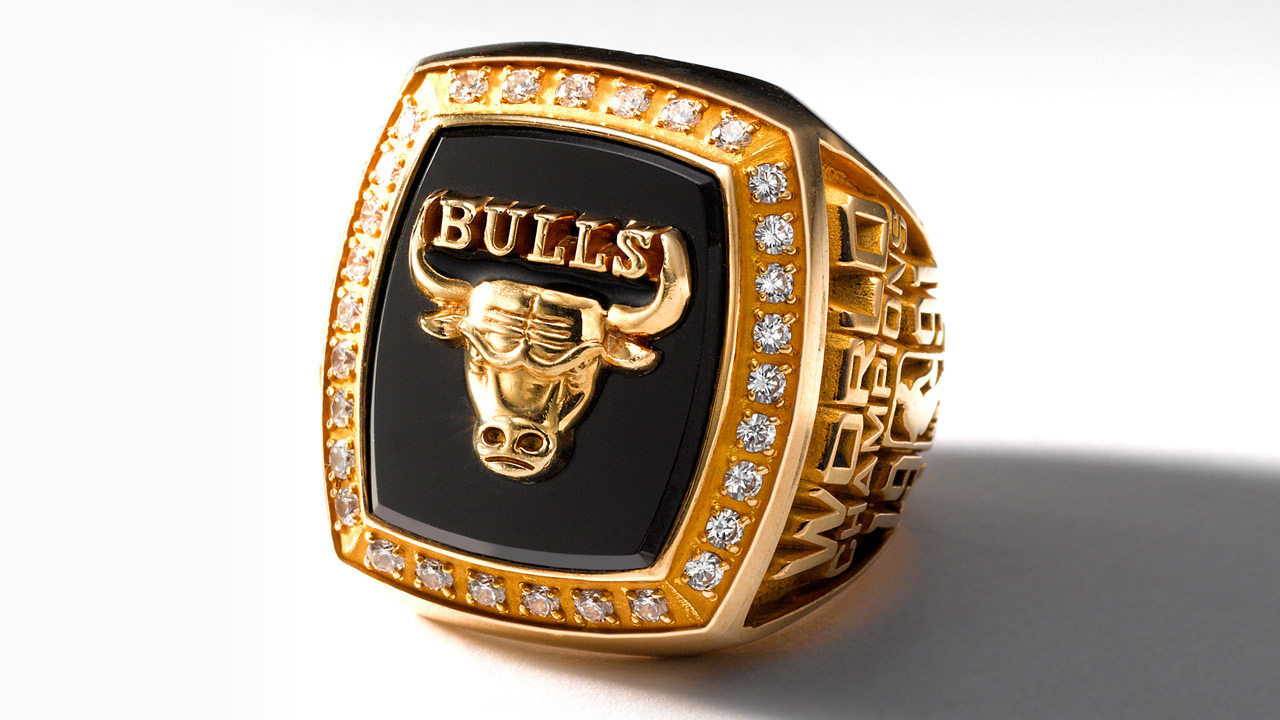 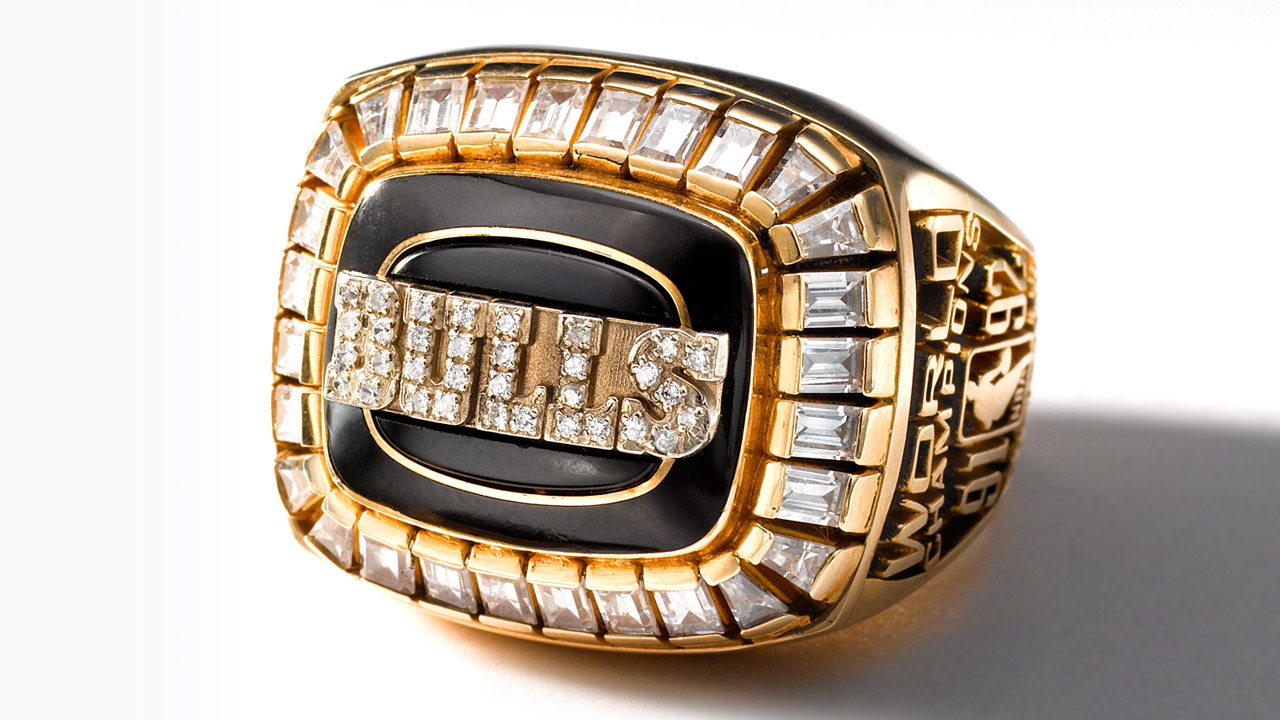 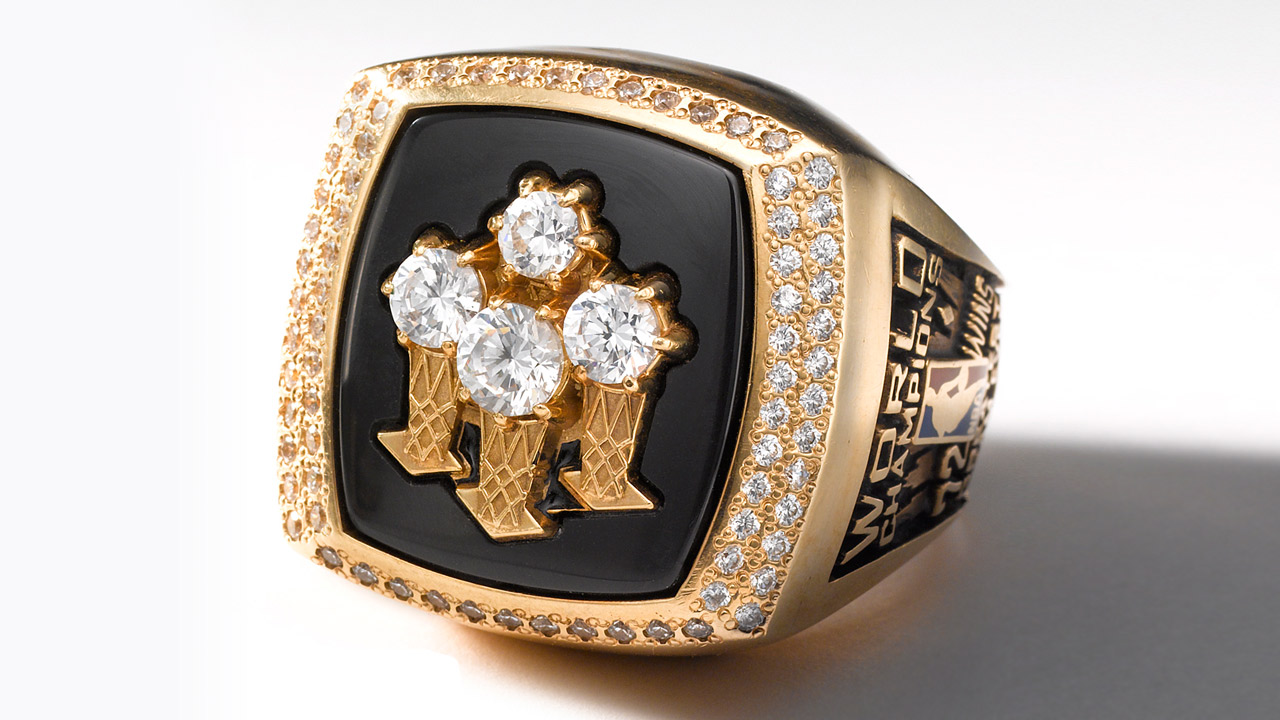 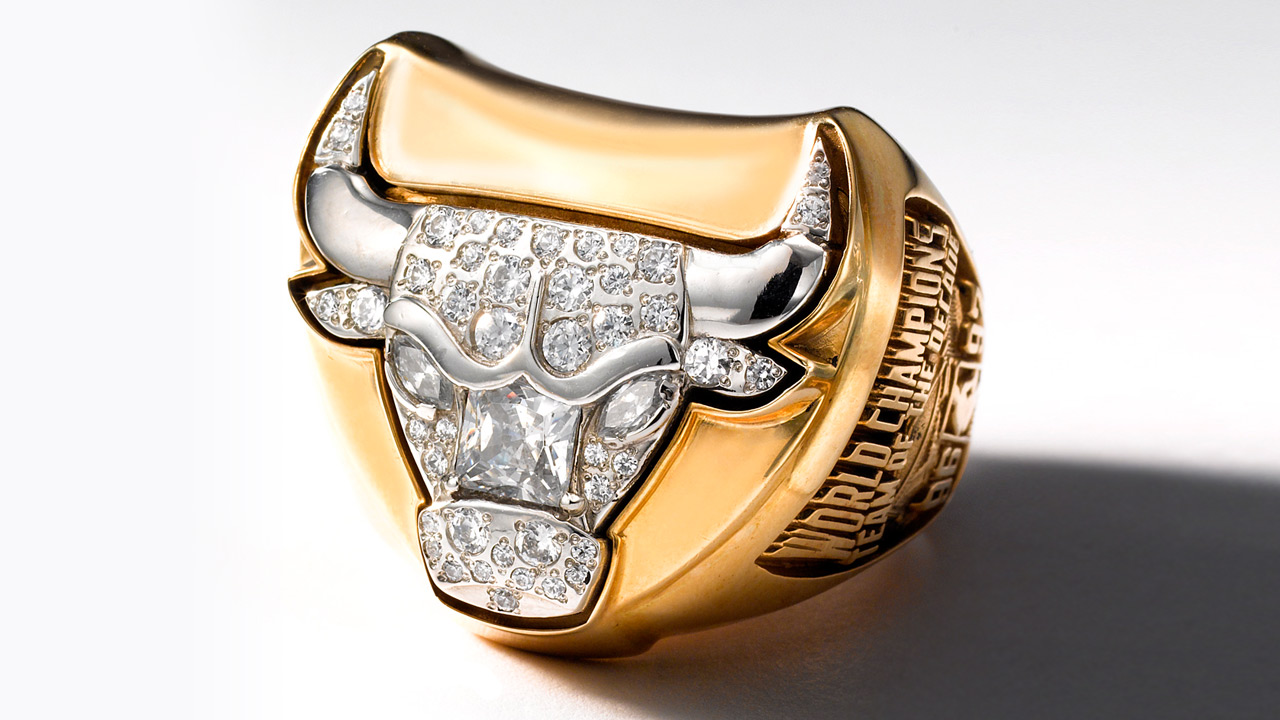 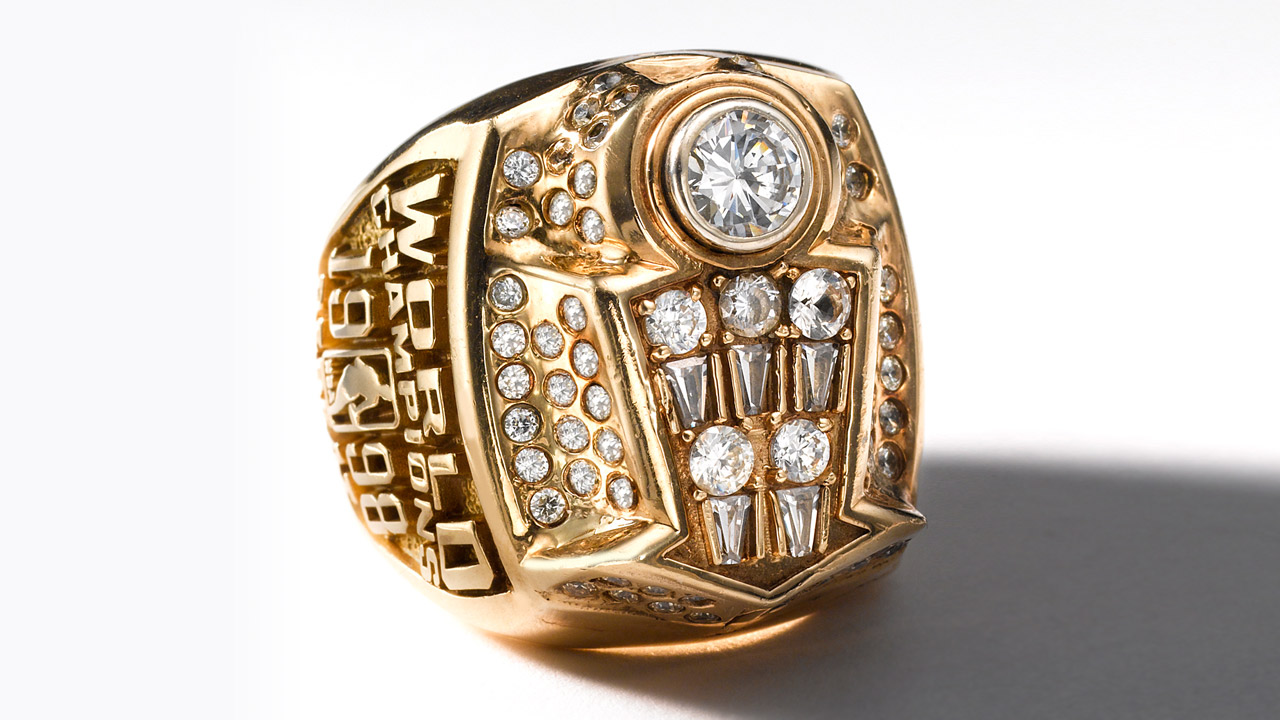 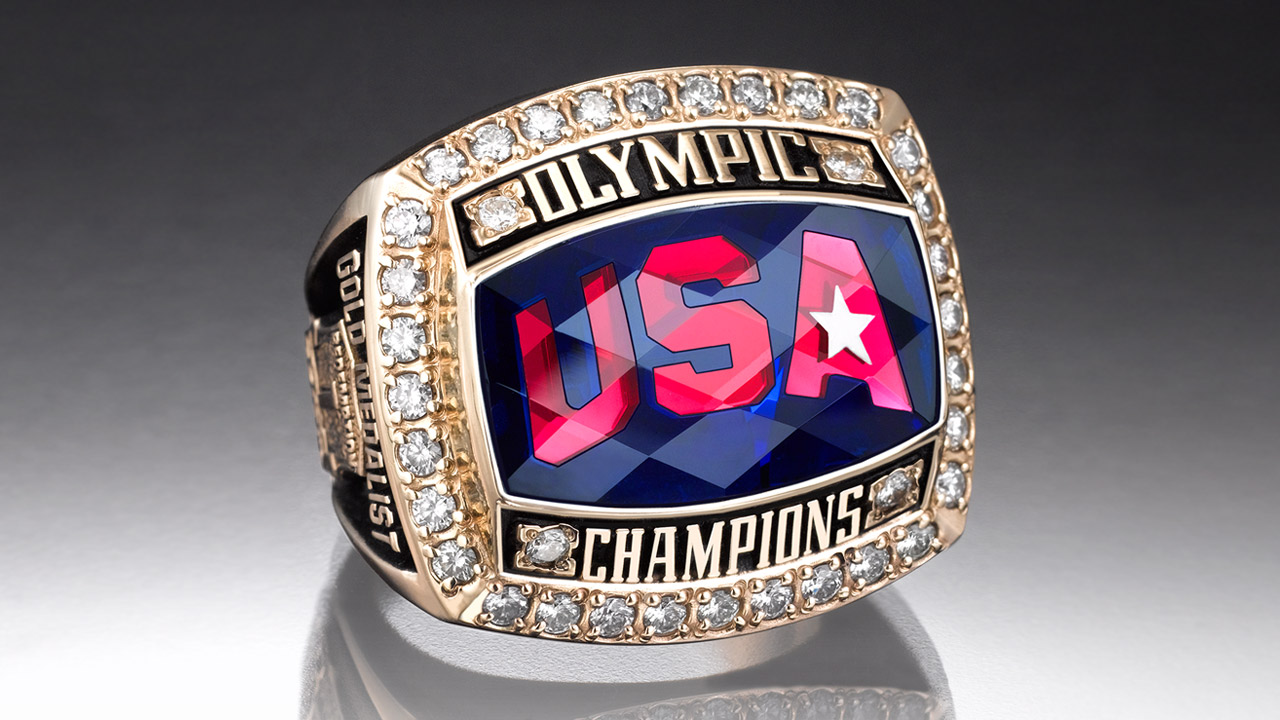 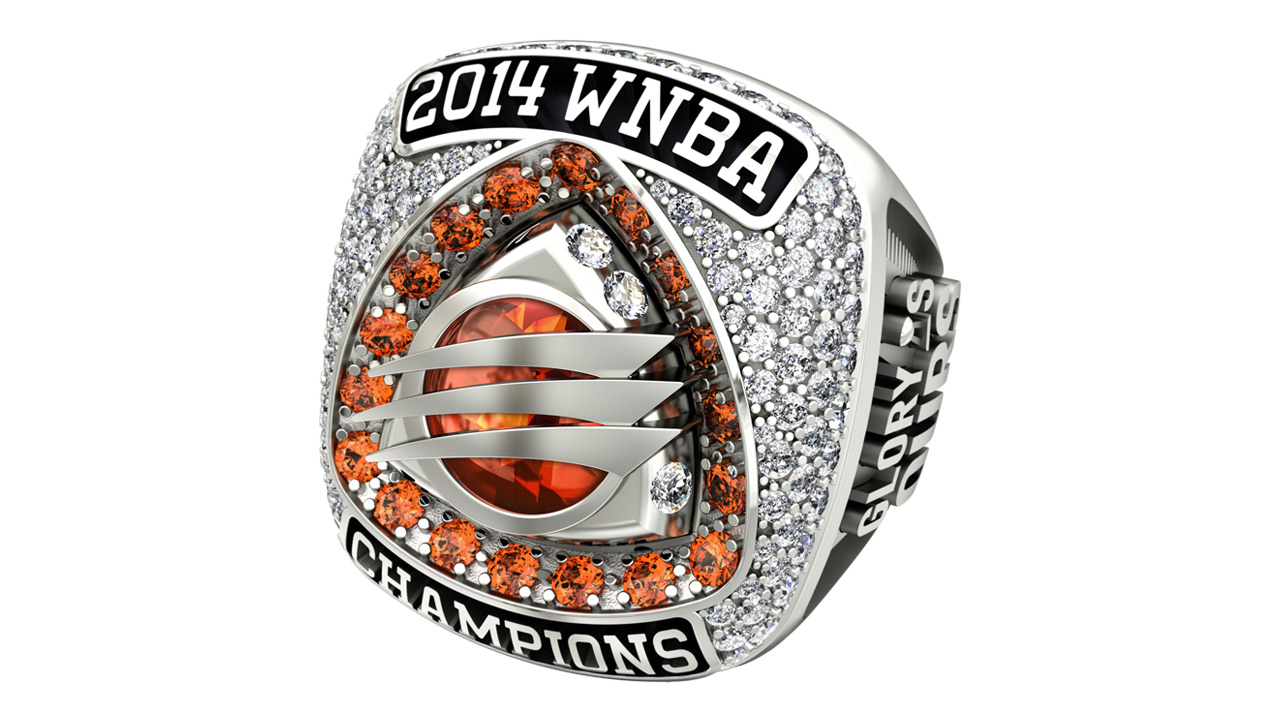 All NBA championship rings made by Jostens and Jason of Beverly Hills come with lifetime warranties. Jostens notes that, as great care is made in making the rings, they are rarely returned for repair. If a ring is ever damaged, players contact their dedicated customer service representative. 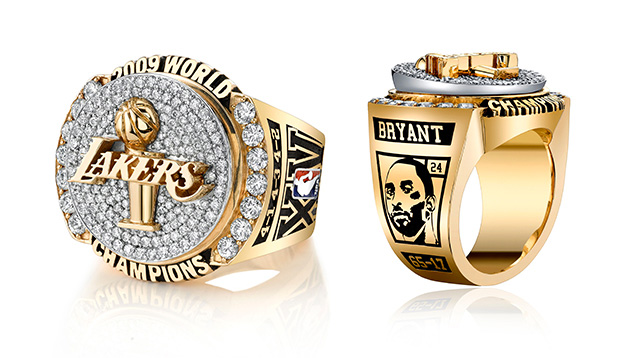 When the LA Lakers won its 15th championship for the 2008-2009 season, Jason of Beverly Hills set 15 large round brilliant diamonds weighing 2.85 cts. on the table to commemorate it. The company also used 15K gold to celebrate the milestone.

The Lakers' rings mirror the shape of the exterior of their home arena, the Staples Center. When viewed from the side, the "roof" and "sides" are visible.

Every player’s face was etched into the side of the ring. CAD/CAM and 3D printing was used to create the images. Kobe Bryant and his team members are each immortalised in their own ring. 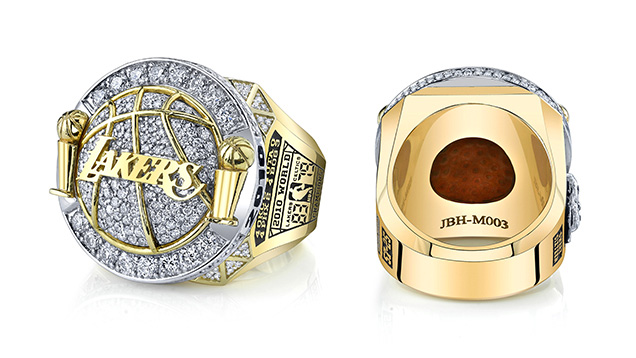 Jason of Beverly Hills also created the NBA championship ring for the 2009-2010 LA Lakers. It has two trophies that represent the back-to-back championships.

A clever touch: A piece of the basketball from the winning game is forever preserved in the ring.

Under the bright lights of opening night of the new season, the players receive their rings. So does everyone who works for the franchise. It’s a thrilling moment. The championship ring is now a permanent tribute to the accomplishment of the past season.

Jason of Beverly Hills added a bit of pizazz to its presentation. Each player was given a box that had a motorised turntable and built-in lights to illuminate the ring. This turned the box into something between a museum display case and a nightclub dance floor.

A new season will begin in the autumn and all 30 teams will compete to win the Larry O’Brien trophy. Only one will walk away victorious. And the process of crafting the NBA Championship ring will start all over again.

Jewellers to the Maharajas of Jaipur and Modern-Day Moguls

Enter a world not well-known in the West—the world of the maharajas and their jewellery.
Read More