Alexandrite, with its chameleon-like qualities, is a rare variety of the mineral chrysoberyl. Its colour can be a lovely green in daylight or fluorescent light, changing to brownish or purplish red in the incandescent light from a lamp or candle flame. This is a result of the complex way the mineral absorbs light.

Alexandrite’s dramatic colour change is sometimes described as “emerald by day, ruby by night”. Other gems also change colour in response to a light-source change, but this gem’s transformation is so striking that the phenomenon itself is often called “the alexandrite effect”. 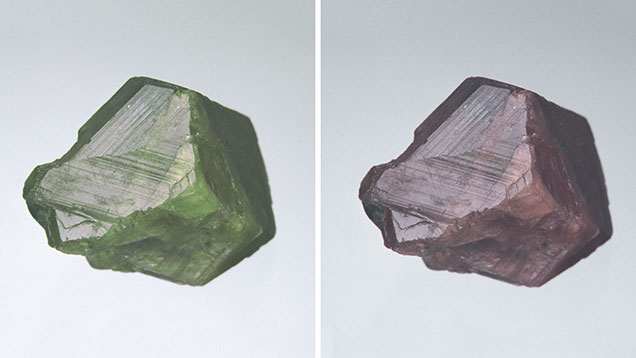 Even in its rough form, this 70.94-carat alexandrite shows attractive colour change.
Alexandrite is also a strongly pleochroic gem, which means it can show different colours when viewed from different directions. Typically, its three pleochroic colours are green, orange and purple-red. However, the striking colour change doesn’t arise from the gem’s pleochroism, but rather from the mineral’s unusual light-absorbing properties.

Because of its scarcity, especially in larger sizes, alexandrite is a relatively expensive member of the chrysoberyl family. It shares its status as a June birthstone with cultured pearl and moonstone.