Color
Red is one of the most sought-after topaz colors and represents less than one-half of 1 percent of facet-grade material found. The color the trade calls imperial topaz is highly prized and very rare. Many dealers insist that a stone must show a reddish pleochroic color to be called imperial topaz. The reddish pleochroic color often appears at the ends of fashioned gems—like pears and ovals—that have an otherwise yellow-to-orange bodycolor. 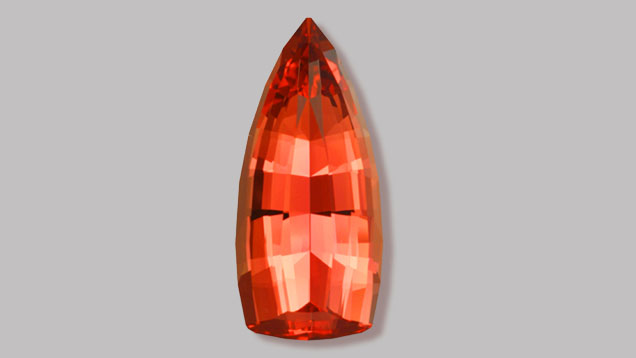 Imperial is one of the most highly prized topaz colors, as seen in this spectacular prize-winning, orangy-red, flame-shaped gem. - Gem courtesy of John Dyer & Co.
A fashioned topaz that displays a combination of two colors is called bicolor topaz. Some say that pink topaz, often called rose topaz, resembles a pink diamond or a bright pink sapphire. Pink topaz has certain advantages over these two gems. It’s much less expensive than pink diamond, and it’s often available in larger sizes than either diamond or sapphire.

Dealers often use the trade term “sherry topaz” for yellowish brown or brownish yellow to orange topaz. The term comes from the color of sherry wine. Stones in that color range are also sometimes called precious topaz. This helps distinguish them from less expensive citrine and smoky quartz, both of which look similar to, and are frequently misrepresented as, topaz.

Golden or yellow topaz lacks the prized red overtones of imperial topaz. It’s also much more abundant and therefore less valuable. Although brown topaz is also less valuable, it has been used in striking pieces of jewelry and ornamental art.

In nature, topaz is most commonly colorless, and naturally strong blue gems are extremely rare. In the marketplace, however, strong blue shades are plentiful. Treatments are the reason for this. Treaters use a combination of radiation and heat to produce blue hues in topaz. Since the 1970s, treatments have brought blue topaz to a broad market. 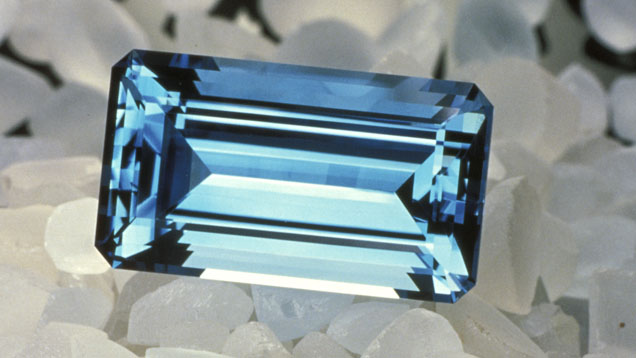 Irradiation and heat treatment transform colorless topaz to various shades of blue. Starting in the 1970s, treatment created a huge market for inexpensive blue topaz. - © GIA & Tino Hammid
When it was first introduced to the market, treated blue topaz sold for $20 to $40 per carat. But oversupply led to huge drops in wholesale prices, down to a few dollars or less per carat. Today, blue topaz is basically a mass-market gem, and price is often the most important consideration for many buyers. Uniformity of color and cut is also important, especially for mass-market jewelry manufacturers. 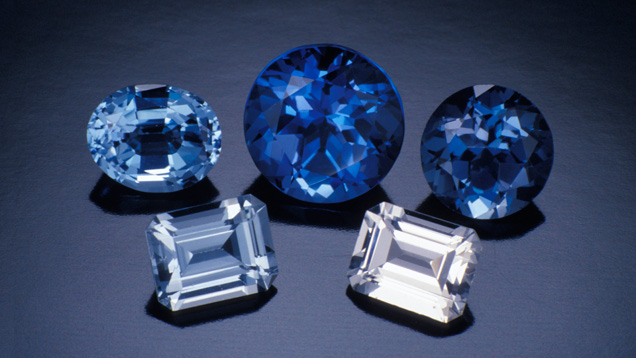 The nature of the starting material and the type of treatment determine the blue that results. These treated topaz stones, weighing from 2.72 carats to 7.86 carats, show a range of hue, tone, and saturation. - Courtesy Chuck Ashbaugh
Clarity
Fashioned topaz gems are often free of visible inclusions or flaws. This especially true of blue, colorless, and yellow topaz.

This ring, designed by Maria Canale, holds a 12.25-carat untreated topaz from Brazil. The gem has no visible inclusions. - Courtesy Richard Krementz Gemstones
Cut
Because topaz crystals are usually elongated or columnar, they’re often cut as long oval or pear shapes to improve yield. If the rough is strongly colored, the cutter often chooses the emerald cut because that cutting style maximizes color and retains the most weight.

Topaz is cut in a wide variety of shapes and cutting styles. Production includes all the standard gem shapes such as ovals, pears, rounds, cushions, triangles, marquise, and emerald cuts as well as designer-inspired fantasy shapes. 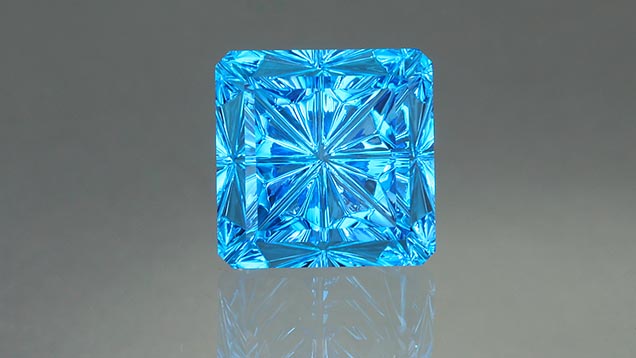 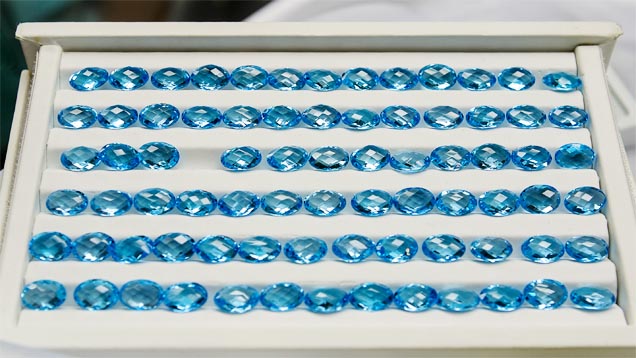 Carat Weight
Standard topaz cuts for the jewelry industry include a wide range of shapes and sizes. The gem is inexpensive in smaller sizes, but prices rise for gems above 10×8 mm. 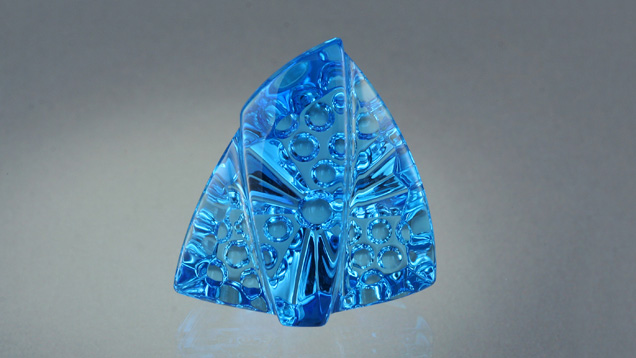 Discover the meaning and history of topaz, a November birthstone, and where it can be found.
Learn More