Individual opals can vary widely in appearance and quality. As diverse as snowflakes or fingerprints, each gem can differ noticeably.

There are three main aspects of an opal’s quality:

How to Evaluate an Opal

Opal evaluation should be done under controlled lighting on a dark background. Rotating the opal against a background helps when you’re determining its type and evaluating its play-of-color and cut.

The Five Steps of Evaluating an Opal 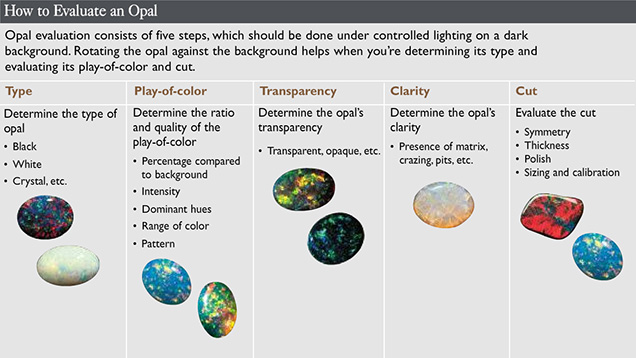 Opal hues can range across the spectrum. An opal might display a single color, two or three colors, or all the colors of the rainbow. Opal displays background color in addition to play-of-color. Background color—also called bodycolor—is caused by the suspension of tiny impurities within opal’s silica spheres. 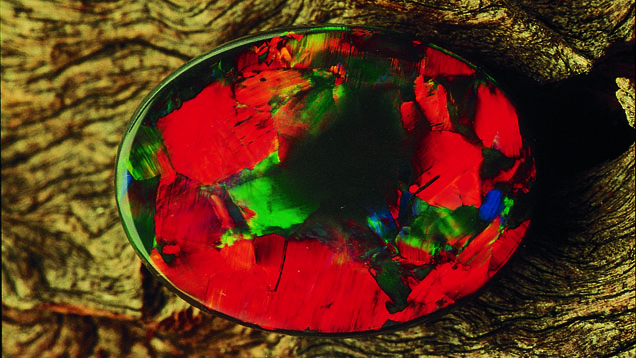 This black opal has a lot of red play-of-color, which is considered highly desirable. Courtesy Mariora, Surfer’s Paradise, Australia

Opals are often divided into types based on background color. Even though there are many different categories for opals, here are the main five types:

White Opal
An opal with a translucent to opaque white and other light color backgrounds (bodycolor) with play-of-color is called white opal.

Fire Opal
Fire opal is transparent to translucent with a bodycolor that is usually yellow, orange or red. This material, which might show play-of-color, is also known in the trade as “Mexican opal” or “Mexican fire opal”. 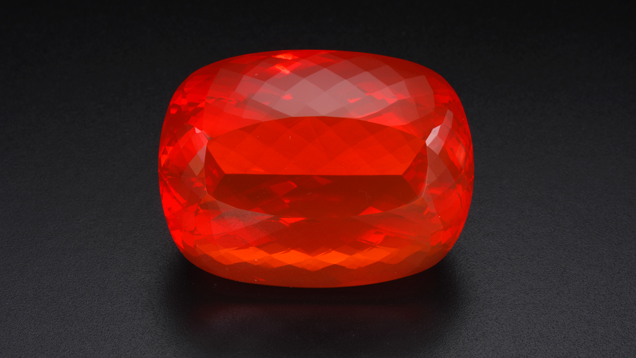 Boulder Opal
Boulder opal is translucent to opaque opal with play-of-color within a host rock. Thin layers of opal exist within the host rock (called matrix). The opal is cut with the matrix attached and is part of the finished gem. 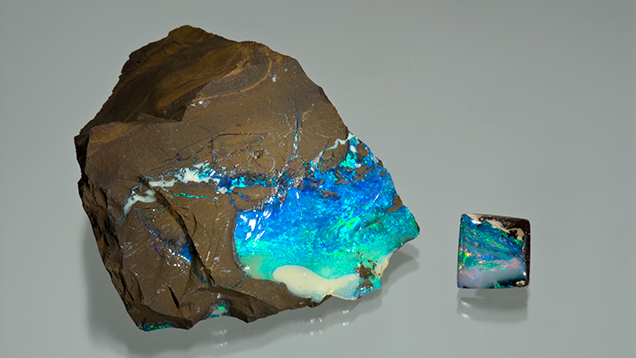 Crystal and Water Opal
Crystal opal is transparent to semitransparent with a clear background. This type of opal can show excellent play-of-color. Water opal might or might not display play-of-color. If it does show play-of-color, it is faint and covers only small portions of the gem.

Secondary in importance to play-of-color’s strength is its range. If an opal’s play-of-color is not just bright, but also ranges across the entire spectrum, it’s very rare and valuable. Not every precious opal, however, sparkles with every color of the rainbow. In some, the play-of-color consists of just one main color and two or more secondary colors. 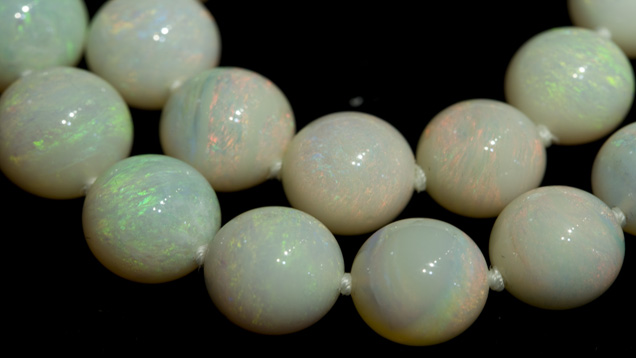 These light-colored opal beads are milky in appearance and have numerous dead spots with no play-of-color. Courtesy Cody Opal

Desirable play-of-color is further broken down by the colors themselves. Traditionally, red is considered the best prominent color, orange the next most desirable, followed by green. However, favored colors can vary with fashion or personal preference.

In addition, an opal’s play-of-color can change along with the viewing angle or type of light. For example, red might dominate in the same portion of an opal cabochon where blue dominates when it’s viewed from a different angle.

The most valuable opals display play-of-color from all angles.

Pattern describes the arrangement of an opal’s play-of-color. Like the shapes you see in the clouds, play-of-color takes many forms.

In general, connoisseurs prefer large, closely arranged patches of color over tiny, scattered dots. As with any play-of-color, no matter what the pattern, colors must be bright for the stone to be valuable. 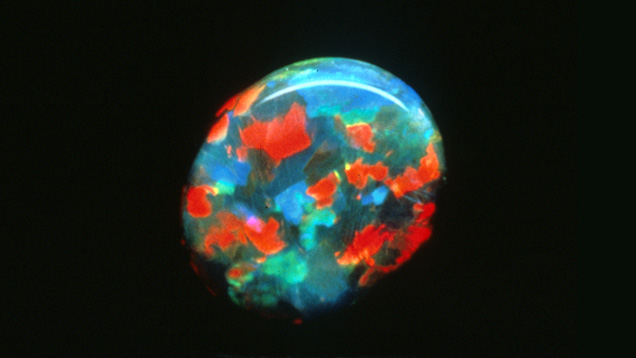 The harlequin pattern in this black opal has a lot of red, blue, and green play-of-color. Photo: Rudy Weber. Courtesy Cody Opal 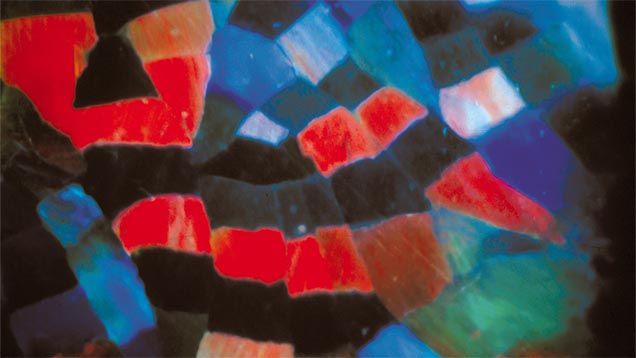 In a close-up view, you can see the details of a black opal’s near-perfect harlequin pattern. Courtesy Cody Opal

In addition to the arrangement and shape of the play-of-color patches, buyers must consider extinction, or “dead spots,” when evaluating pattern. A dead spot is an area of the gem in which no play-of-color appears and only background color is visible. Dead spots detract from opal value, especially if there are several of them.

With an opal, clarity is its degree of transparency and freedom from inclusions. An opal’s clarity can range all the way from completely transparent to opaque. Experts prize different levels of clarity for different opal types. For example, in crystal opal, experts admire transparency, while in black opal they prefer an opaque background. Each provides the best background for displaying play-of-color in its individual opal type. A cloudy or milky background color lowers the value of any opal. It makes the gem less attractive, and it can sometimes signal a lack of stability. 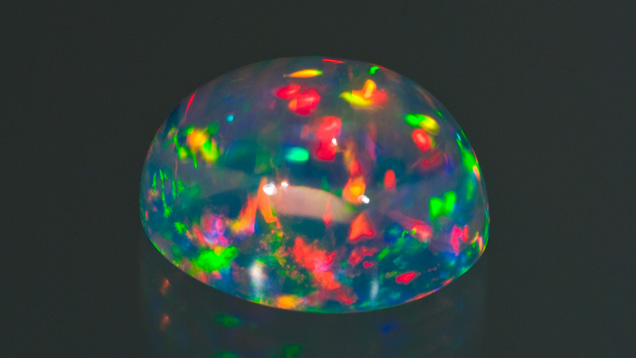 Crystal opal can have intense play-of-color in a harlequin pattern.

There are various types of opal clarity characteristics that affect value. Opals, like other gems, can have fractures, or pits and other surface blemishes. An opal might also contain fragments of its host rock, called matrix. Matrix in a polished opal is usually—but not always—detrimental to its appearance and value. It depends on the type of opal.

If an opal loses moisture, it can lead to crazing: a fine network of cracks that resembles a spider’s web. The moisture loss can be caused by heat or excessive dryness, or by exposure to bright light or direct sunlight. Crazing can be prevented by never displaying opals in places— such as window displays—where they’re exposed to these conditions. 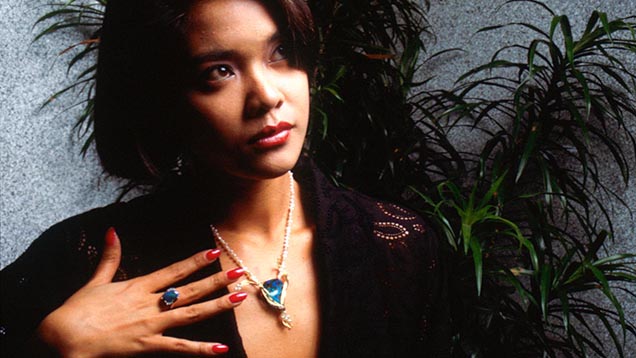 Even if cracked opals don’t break right away, they have little durability in jewelry, and the fractures spoil the beauty and clarity of the gem. For quality control, producers and dealers single out opals that they suspect might ultimately craze. Dealers who willingly buy crazed opal do so because it commands a lower wholesale price than undamaged opal. This means they can sell it at a lower retail price level.

The cutter considers an opal’s color, pattern, and clarity when planning the finished gem. As with many top-quality colored stones, exceptional opals might not be cut to standard sizes and shapes. 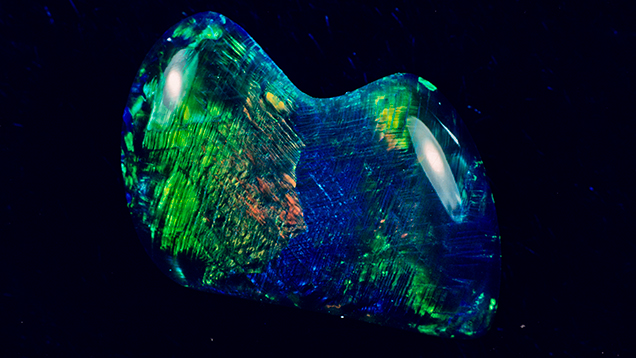 This incredible black opal is cut in a freeform shape. Photo: GIA

Cutters usually fashion exceptional rubies or sapphires, for example, in a way that saves weight or maximizes color— even if the result is an unevenly proportioned gem. In a similar strategy, opal cutters usually cut top-quality rough to show off its spectacular play-of-color.

To achieve this goal, cutters might fashion fine opals into large, irregular shapes that keep as much play-of-color as possible. Designers set these costly one-of-a-kind gems into custom pieces.

The cut of a fine opal should be symmetrical. If it’s a cabochon, the dome should be well rounded. Domed surfaces give the best play-of-color, and make the stone appear vivid from most viewing angles. If the cabochon is flat, it might be vulnerable to breakage, especially during setting into jewelry. If it’s too high, it might be hard to set in jewelry.

Opals come in a wide range of sizes and carat weights. Opal has relatively low density compared to many other gemstones so even larger sizes can be comfortable to wear.

The Fire of Australia, a large uncut opal, weighs 998 grams or just under 5,000 carats. South Australia is one of the few places on Earth where opals of this size can be found. Approximately 90% of the world’s opals are from Australia. 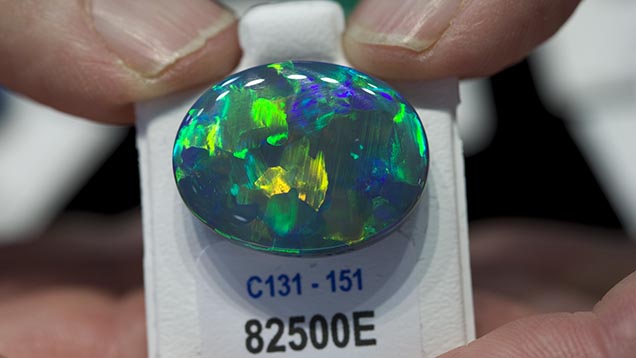 At 24 carats, this high-quality black opal will make an impressive centerpiece for a jewelry design.  Courtesy Cody Opal

Opal can be fragile. In solid opal cabochons, the gem material is usually thick enough to withstand everyday wear and jewelry repair without breaking. But with thinner material, manufacturers often have to add a rigid backing for durability.

Assembled opals are fashioned opals with backings. They might include materials like glass that aren’t usually part of gem-quality jewelry, but because they are partly precious opal, they still have value as gems. They sell for only a fraction of the price of boulder opals, but they allow manufacturers to make attractive finished gems from thin opal pieces.

The two common types of assembled opal are the opal doublet and triplet. The doublet is a thin layer of opal cemented to a backing. The backing is often composed of obsidian, dyed black chalcedony, black glass, natural common opal, or plastic. The triplet is a thin layer of opal cemented between a domed top of colorless quartz or clear glass and a backing of obsidian, chalcedony, or black glass.

Discover the meaning and history of opal, an October birthstone, and where it can be found.
Learn More