Due to the ever increasing popularity and value of Queen conch (Lobatus gigas, formerly Strombus gigas) pearls, GIA has seen a steady increase in the number of conch pearls submitted to its various laboratories for identification. In response, this is an appropriate time to improve and expand upon GIA’s conch pearl color terminology in general and, more specifically, how it is applied to GIA Pearl Identification Reports.

In order to be identified as Queen conch pearl, non-nacreous pearls that formed in the Lobatus gigas mollusk must fall into the red (pink) hues, namely reddish purple (extremely rare), purplish red, red, orangy red, and reddish orange. While conch pearls do occur in colors outside of this hue range, it is challenging to definitively identify them as such in a laboratory when they lack any red (pink) hue. Because the vast majority of Queen conch pearls fall into mid-tone and mid-saturation ranges, in the straight red hue, GIA (in keeping with the trade) has traditionally described conch pearl color in a much more general way than nacreous pearl color. The bulk of conch pearls were simply described as pink, unless the tone and saturation were significantly out of the mid-range in either direction (weaker or stronger). GIA’s current and historical data, as well as the studied sample materials, produced results that reinforced the notion that pink occurred most often, followed by Strong pink, Light pink, and Very light pink, with Red occurring very rarely. Some examples of these pearls are shown in figure 1.

In determining the boundaries for the different aspects (hue, tone, and saturation) of Queen conch pearl color classification, a number of resources were used. In addition to physical samples, we also used references from GIA’s database, with the application of color science, and from GIA’s color system for nacreous pearls. The goal was to create practical boundaries and color ranges that were discrete enough to differentiate between the obvious typical variances in conch pearl color, but would not be difficult to employ or understand. Once the accuracy of the boundaries was established, a “Conch Pearl Color Terminology Chart” was developed. This chart illustrates all of the boundaries, as well as the master pearl placement in the defined color space, and the designated color classification terminology.

A key issue that needed to be explored before expending the time, effort, and cost to create Queen conch pearl masters was color stability, especially with regard to the pink component; we have seen previously that such color can be modified under X-ray radiation. One quick illustrative experiment, where a piece of Queen conch shell was exposed to X-ray radiation under GIA’s X-ray luminescence instrument (100 kV, 3.2 mA, approximately 4 inches from the X-ray source), is presented here. The left side of the shell’s surface was shielded from the radiation, while the right side was exposed to X-rays. After 15 minutes of exposure, the apparent color of the shell turned from pink (left) to purplish (right), with reduced saturation (figure 2). A different result was observed when pink shell was exposed to short-wave UV radiation, for an extended time (after 4 hours), using a conventional 4-watt short-wave (254 nm) lamp. However, unlike the hue change observed in response to X-ray exposure, the effect observed using short-wave UV was a reduced saturation of the same hue (fading). No obvious changes were observed when the shell was exposed to long-wave UV radiation (365 nm) for 6 hours, although the effect of long-term exposure under long-wave UV radiation is still unknown. Exposure to sunlight and the fluorescent white light used for pearl classification also failed to induce any color changes. 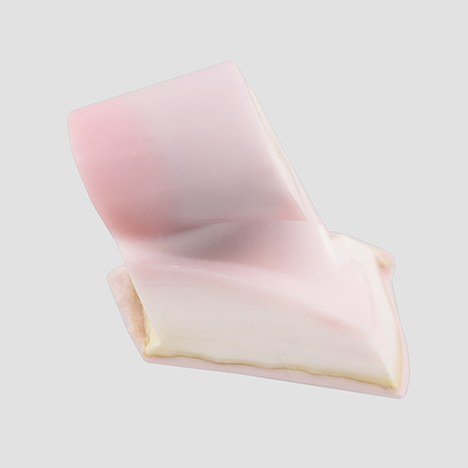 Figure 2. Hue and saturation changes observed on a piece of Queen conch shell after 15 minutes’ exposure to X-ray radiation. The shielded area is to the left, the exposed area to the right. Photo by Sood Oil (Judy) Chia.

In addition, we recorded a real-time color change of a section of Queen conch shell exposed to X-ray radiation for 10 minutes, which clearly shows a gradual color shifting over this period. A ten-second time-lapse video is shown here, with the before and after appearance of the shell also shown at the end of the video. However, this experiment was strictly for research purposes, as the actual laboratory testing of Queen conch pearls only requires a very brief exposure of the samples under X-rays at minimal power settings necessary for examination of their internal structures. Proper shielding with lead is also used when multiple conch pearls are mounted in a single piece of jewelry, to avoid any unnecessary collateral exposure.

In summary, GIA has developed a consistent in-house color classification system and color masters for conch pearls, resulting in a comprehensive yet straightforward method to evaluate conch pearl color. While the color stability experiments clearly illustrate that the color of Queen conch shell and pearls may shift in hue and/or saturation under either X-ray radiation or short-wave UV radiation, GIA has long-standing precautions in place to mitigate the issue. Furthermore, the results showed that under standard lighting conditions, no discernible color changes were evident. Improved precision in describing conch pearl color facilitates better color consistency between GIA gemologists and the GIA laboratories. The clearer color terminology also allows buyers and sellers to communicate more accurately and effectively with each other.

The authors wish to express their gratitude to Ms. Susan Hendrickson, who has provided samples used in this project and for her helpful insights and discussions.

The History and Gemology of Queen Conch "Pearls"

This article reviews the history of the conch "pearl," discusses S. gigas and its fisheries, and examines the gemological properties and other characteristics of this attractive material.

Emmanuel Fritsch and Elise B. Misiorowski

Advances in pearl culturing are seen in a parcel of specimens from Strombus gigas gastropods.