Unique collection on display at GIA in Carlsbad, California, until October 10, 2018

CARLSBAD, Calif. – September 25, 2017 – A singular exhibit of intricately designed 17th to 20th century jewelry and ornate objects from India debuts on Oct. 13 at GIA’s (Gemological Institute of America) world headquarters in Carlsbad, California. “Centuries of Opulence: Jewels of India,” will be on display until March 1, 2018 (editors note: in December 2017 the exhibit was extended until October 10, 2018.), showcasing 300 years of adornment with 50 lavish historical jewelry pieces and objects, including several from the Mughal Empire (1526–1857).

“We are thrilled to be able to exhibit this spectacular historical jewelry,” said Terri Ottaway, curator of the GIA museum. “The wealth of gems in each piece gives us a tantalizing look at the lavishness of the royal courts of India from centuries past.”

“Centuries of Opulence: Jewels of India” explores the often intricate routes diamonds, rubies, emeralds, sapphires and other gems decorating these pieces took from their sources across the globe. It delves into their religious and cultural symbolism, the wars fought for them and the historical tradition of gemology - the study of gems - in India. The pieces exhibited are on loan from a private collection.

Ottaway continued, “The nobility of India traded diamonds from their famous Golconda region for Colombian emeralds, Burmese rubies and pearls from the Persian Gulf.  No mine was too remote to access, no ocean was too wide to cross, in pursuit of the very best gems. For the gems not only conveyed wealth and status, but they were also worn as talismans for the protection and enhancement of life. With so much at stake, you begin to understand why wars were won and lost for these treasures.” 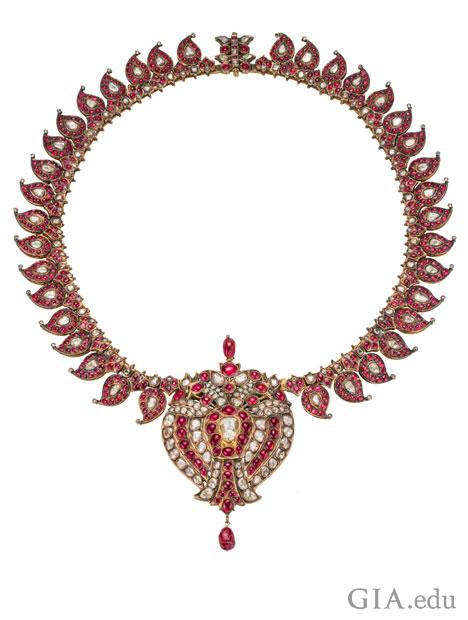 While a necklace exhibiting mango-shaped elements, a manga mala, is traditional in South India, a piece as elaborate as this one was worn only by those who could afford such a massive gem-set jewel. The pendant represents the mythical two-headed bird gandaberunda that was the emblem of Mysore’s Wadiyar royal family. The necklace features stylized mangos around the collar and elaborate repoussé detailing on the back. Mysore ▪ 19th century ▪ diamond, ruby and emerald in 22K gold ▪ Necklace 79 cm long, pendant 11 x 8.5 cm. Courtesy of a Private Collection. Photo by Robert Weldon/GIA

Throughout India’s history, many different gems were used in elaborately designed jewelry. Some served to honor religious figures; other jewels were integral to the marriage contract, as seen in nose rings worn as tribute to happiness in the union. Elaborately designed wedding necklaces depicted snakes or fish as symbols of fertility, and the colors used in enamel - typically on the back of jewelry pieces - functioned as a representation of the forces of life.

The exhibit opens in conjunction with GIA’s annual Jewelry Career Fair on October 13, 2017, the only day when the campus is open to the public with no appointment necessary. For more information visit https://www.gia.edu/career-fair or call 800-421-7250 ext 4100.